I think we should probably start a forum to list judges that are lenient towards drunk and otherwise dangerous drivers.  We can review this list when it comes time to vote to retain the judge.  I searched the forum, but have not found a similar thread.

Judge William Hooks has been yanked from the bench (temporarily?). 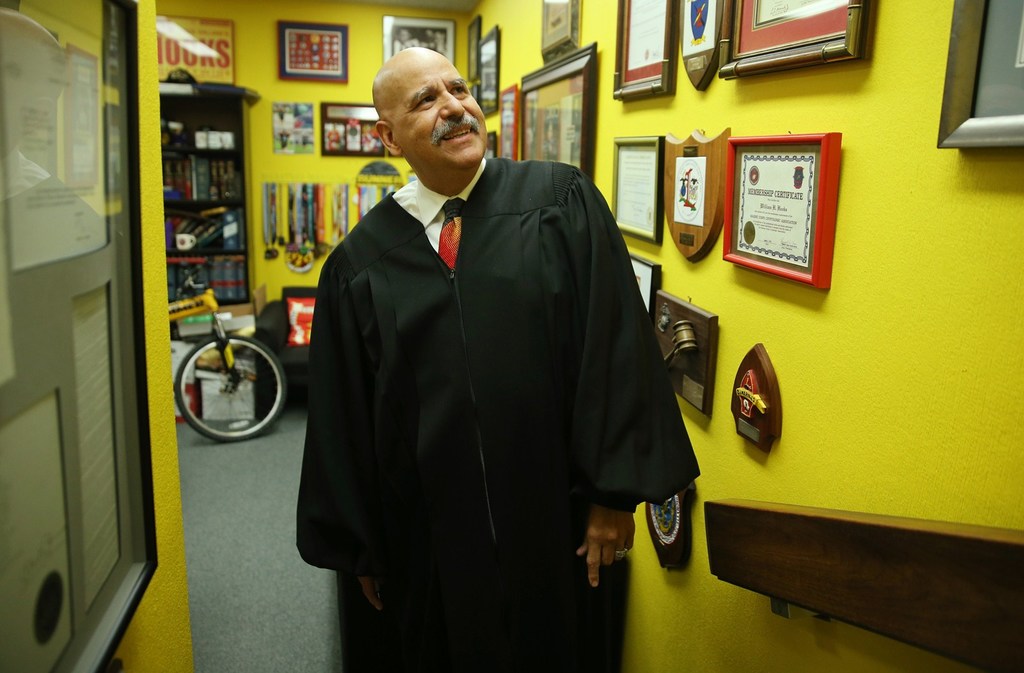 Streetsblog, "Judge Nicholas Ford gave Robert Vais, the driver who struck and killed cyclist Hector Avalos while drunk, a relatively light sentence of 100 days in a state prison plus two years probation. Vais must also perform manual labor as part of the Sheriff’s Work Alternative Program once a month for two years, and undergo drug and alcohol treatment."

Cook County judge on Friday issued a $150 fine with supervision to the driver of an SUV that struck and killed a Mount Prospect mother of five as she was riding her bike in a local crosswalk earlier this year.

Cook County Circuit Court Judge Samuel J. Betar III fined Hanna Burzynska, 56, of Elk Grove Village, $50 for each of the three traffic tickets she was issued as the driver involved in the fatal accident on June 9 that led to the death of Joni Beaudry, 55, who had activated the crossing signal and was riding her bike at the crosswalk at Central Road and Weller Lane.

Permalink Reply by Filka Bean on February 11, 2017 at 9:49pm
An old friend's dad advised her to always vote "no" for every single judge, because otherwise the only people opposing them are the handful who learned firsthand that they're no good... Since i follow this advice, I'd be interested if any judges are known to be especially good, in addition to especially bad.

I  am very conflicted.   I agree that society needs to  take cyclists seriously and that  when  cyclists are injured  or killed on  the road that those  responsible need to be held accountable.  I  am  baffled by the seemingly light dispositions in  the criminal cases that have been  discussed on  this forum.  That being said I have  issues with judges being scapegoated and  I have  a continuing strong  opinion that  civil rather criminal remedies are the only ones that really matter.

First, on  my continuing  diatribe that civil remedies matter.  Taking a pound of flesh from San Hamel and  others makes us feel good and  makes us feel that we have  some retribution but it never,  ever, brings back a Bobby Cann.  It never,  ever does anything other  than  give  some sense of  pleasure  to the families of the  victims.  When a  family is  left without their son,  their daughter, their breadwinner,  their love a  civil remedy....MONEY... can help pay the  bills can help send the  kids to school,  can  help the families do something charitable in  their loved one's name. It may seem  crass to some but this  is all that is ever going to help.

On the subject of judges...voting  no for all is very bad advice.  I advocate the opposite.   vote  yes for all judges with the  exception of those who are  incompetent or unethical.   Read all the  bar association  reviews and do not just read one. They do not  always agree but  when they do it is a powerful indicator for or against a judge.   Look at groups such  as the Chicago Council of Lawyers and  groups representing  women lawyers  and  lawyers of color.  The no votes will scream at you after  looking at a handful of these recommendations.  I  cannot  explain  what happened with  Judge  Hooks and Judge Betar. I did not  follow close enough. All I can  say is that  I have  had  experience with  these two and  find them highly competent and ethical  judges.   Before  summarily writing  them off please  look  at their  body of work and how they are  seen by these associations on that  body of work.   How have  the judges ruled in other  cases? Perhaps,  did the  judges take into account that they were aware of  a  civil remedy? I  do not know. Would they have  ruled the same way if a driver with no insurance took somebody's life?

Don't be a single issue voter.   I don't think I  have  to tell any of you how destructive single issue voting can be. How many anti abortion  voters deciding that  Hillary was the devil voted for our current President simply because  he reassured them  he  would  pick anti abortion Justices for the Supreme Court? Take issues  like cycling into account but  do not make those issues a litmus test especially with one case out  of  hundreds or thousands at stake. This might be different  with  a  legislator but  with  a judge  we  have  to ask is the judge anti cycling or did the judge rule  in  a way that seems anti cycling on a single case.

Point taken about reading bar association reviews. For the last few elections, I've made a point to read them and vote NO for those who are considered unqualified or not recommended by the bar associations. More people should take the time to do this. Good judges should get retention votes.

Regarding your comment about Judge Hooks being highly competent and ethical, I have a comment from a CPD officer who has testified in many DUI cases before the judge. His comment: "Judge Hooks is a waste of oxygen. He doesn't take cases like Bobby Cann's death and other DUI cases that have a significant impact on people's lives seriously enough. He often seems to have more sympathy for the drunk driver than for the victim." That is one officer's opinion. Your mileage may vary.

Another comment from the same officer. "Thorough ongoing professional training for CPD officers is spotty. Too few get special training in handling DUI incidents. There are on-scene tests that are very effective at assessing level of intoxication for even 'career drunks', who can fool officers who aren't experienced at handling DUIs. These tests require special training, which most officers don't get. Lack of this training can result in inept handling of a DUI incident."

This officer's opinion is that responding officers at the scene and the state's attorney seriously compromised the case. He said that procedural errors were made by the responding officers on what should have been a slam dunk case against San Hamel.

In this type of incident and many others, investing in more thorough training for CPD officers (as well as rooting out the old school culture of favoritism that hides discipline problems until they are later exposed in problematic incidents like the Laquan McDonald shooting) is an essential step to getting the Cook County justice system closer to what it should be - a system that dispenses fair and equal justice, not unfairly punishing regular people and letting those with money and connections slide.

The training issue was exposed in the recent FBI report about CPD. The discipline and favoritism aspect did NOT get exposure there. That aspect of CPD's problems is a cancer at the heart of the system.

It's not just the judge, it's our attorney as well.  We get to vote to elect our attorney every four years, and our attorney, as well as the assistant assigned, is just as culpable at the judge when a lenient sentence is handed down and not strongly opposed by our attorney, the States Attorney.

You mean State's Attorney, right? Yes, the quality of the work done by the State's Attorney is critical in a case like this. If it's not solid, a good defense attorney can pick it apart.

I wrote this on the Bobby Cann thread:

We also need to reexamine why DUIs happen as much as they do and how we can actively work on addressing the problem. By giving a 10-day sentence and a $25k fine, our justice system is not balanced and fair and is not doing enough to deter future DUIs. It just isn't a meaningful answer to the problem. Why is he not required to attend counseling? Lifetime loss of license? Meaningful community service? Having a driver's license is a privilege that shouldn't be taken lightly by driving while intoxicated or distracted (smart phones, drugs, etc.). The United States is the third worst country for DUI-related deaths (that does not include distracted driving). 31% of road-related deaths in the U.S. involve alcohol.

It does look like stiffer sentences may not ultimately deter a tragedy like this from happening but neither does a (very small) slap on the wrist. Or letting him off free twice - before someone was killed.

As Bobby's mother pointed out, no amount of infrastructure will protect the vulnerable users of the road - in a car, on a bike, or on foot from a person that is driving recklessly. If Ryne faced stricter consequences e.g. loss of a license, required counseling with education on the dangers of driving while impaired, a life could have been saved.

It's definitely a worthwhile discussion - what is the appropriate punishment to suit the crime and loss of life?

Unfortunately, doing nothing (just live with the guilt) or a civil suit isn't an effective way to deter future DUIs from occurring. By the time we get around to the sentence of a repeat offender like Ryne, it's already too late - the system has truly failed.

Vais does seem to have had a more meaningful sentence for a few reasons:

- Requirement to perform manual labor once a month for two years

I don't agree with the sentence Ryne San Hamel received because there's no drug and alcohol treatment, no community service, and when Ryne tried for years to get the charges dropped, does this illustrate the "remorse" that impacted the judge's choice for a very light sentence? Ryne seemed ok with going to court, seeing Bobby's aunt and mom in court for years and in all that time, didn't it strike him (or his family) this has taken a huge toll on Bobby's family? I believe there should be a mandatory loss of license in the case of DUI-related death.

In changing our culture, organizing a night out should involve making arrangements NOT to drive if you plan to have a few cocktails. We have many options open to us e.g. CTA, cabs, hotels, Lyft/Uber. So many of us have adapted this approach, it isn't a stretch to make a large-scale shift in our culture. Why drive when you don't have to?

In addition to the above, there's a need to change the fundamental way we think about driving while impaired. Other countries have changed their culture and improved their statistics. There's a lot we can learn from them and adopt similar policies, campaigns promoting this shift, and implement meaningful consequences e.g. loss of license, mandatory counseling starting with the first time offenders, testing that doesn't wait hours for a blood test - streamlined testing procedures so we get an accurate blood alcohol reading that translates to mandatory consequences - no amount of celebrity lawyering should be able to get someone out of a DUI. Also, mandatory training for all law enforcement on these policies.

Also, if a motorist is in a crash that results in death, mandatory testing even if they don't think it's a factor because that's a subjective assessment and alcoholics can seem sober when they are not. Somehow we also need to address this for distracted drivers as well e.g. smartphones because that is just as much of an issue (see the case I mentioned in Mount Prospect - a $150 fine for killing a cyclist).