But some homeowners on Dickens Avenue have launched a fear-mongering website and flyering campaign against the proposed Dickens Avenue greenway, which would help create a low-stress connection between The 606 and the Lakefront Trail.

Come show your support for the project at the community meeting next Thursday, August 22, 6 p.m. The venue for this meeting has been changed to accommodate more people. It will be held at the Lincoln Park High School auditorium, 2001 N. Orchard Ave. 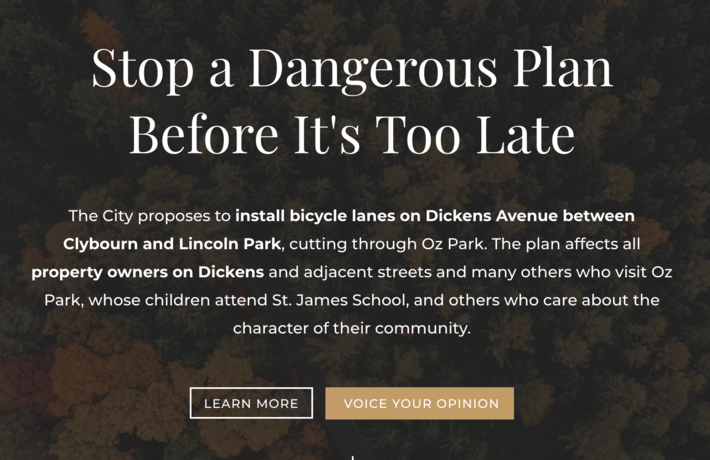 Good catch, will fix, thanks.

"...the character of their community."

Yep. Gotta' make sure and keep the poors out.

The venue for this meeting has been changed to accommodate more people. It will be held at the Lincoln Park High School auditorium, 2001 N. Orchard Ave.

Thanks! I'll add it to the top of the post.

Affect the property owners how, exactly? Will they lose the privilege of free on-street parking? What in their minds is dangerous about a bike lane? Wish i could be there to ask.

No, that's not why... in terms of objections, xenophobia isn't the basis of their concerns.  Fortunately, the notion of xenophobia in this context is just a strawman.

Separately, many people on Dickens like cycling - especially with their children - and think some bike lanes and such would be nice.  However, others don't want to endure additional hazing at crosswalks from additional cyclists who may not stop at stop signs, etc.

At issue is merely this - If we at large as cyclists abided by the rules of the road, especially stop signs, and exhibited more roadway courtesy to others, especially pedestrians, the folks of Dickens and elsewhere wouldn't care as much about a new set of bike lanes and the bike traffic expected to come with it.  CDOT's non-sequitur about 40,000 motor vehicle deaths that don't occur on Dickens offers no comfort nor relief from bad road behavior from cyclists elsewhere, and many people on Dickens just don't want to add to that where they walk, drive and cycle.

Any word on how this meeting went?

SBChi had a recap here:

Does anyone have info regarding whether the Dickens greenway has now been approved? To date, I have seen no planning or construction progress...

The greenway was never approved, and nothing seems to be happening at the moment, but I'll check in with the alderman and CDOT.