The new section of the Lakefront Trail’s Navy Pier Flyover will be closed for construction for about a month starting Tuesday, city officials said.

The Flyover, which opened in December to bike and pedestrian traffic, will be closed until about late September so the completed portion can be connected to the second phase of the project, which is almost done, according to a news release from the Chicago Department of Transportation.

The city started building the $64 million flyover project in 2014 to bypass the Lakefront Trail’s dangerous bottleneck near Navy Pier, where the trail continued along the street through a busy intersection at Grand and Illinois streets.

The Flyover will be closed after Labor Day to avoid shuttering it during a busy cycling weekend, the city said.

When the Flyover reopens at the end of September, the second portion will also be available for use via a “temporary bridge to the east sidewalk of the Lake Shore Drive Bridge,” the release said.

Crews will continue working on the third phase of the project throughout the fall. 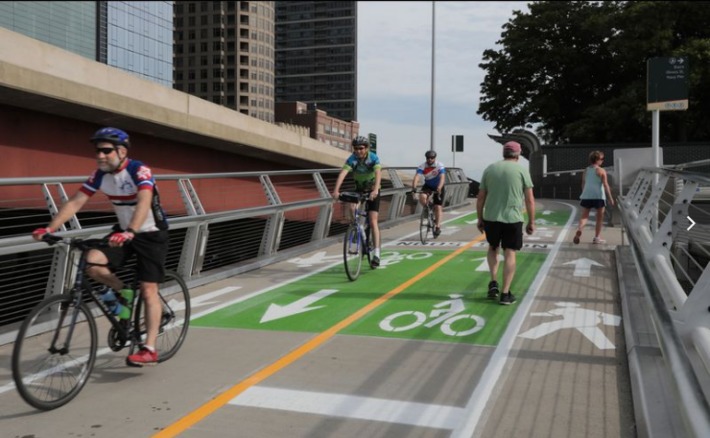 Five years and it's finally reached the river. It's still going to be a massive bottleneck, but without the car traffic right next to you.

Permalink Reply by ketoguychicago on September 6, 2019 at 9:35am

Wow.   What's been your favorite route around all this? (or just carefully making your way through the old way?)

I didn't think the old way was so bad.

I long ago lost track of how many ambulances I saw at lower LSD and Grand due to the blind spot the Lake Point Tower creates. There is a very good reason building private residences east of LSD was prohibited, but the story (urban myth perhaps) is that the Outfit had a good sized role in getting an exception made.

Regardless, as a multi-decade user of the LFT at this point, I have never heard any regular commuters/other users who thought the prior situation was OK. It was already jammed up before the "return to the CBD" craze started, so with the addition of the pedicabs and additional crowds Millennium and Maggie Daley Parks bring in, something had to be done. Navy Pier pulls in 9 million visitors a year- having a pinch point where they are in conflict with bike commuters, car commuters, buses and pedestrians is a long-needed fix.

Going north I take Illinois all the way out around Lake Point Tower.

Have you seen any of these flood barriers go up elsewhere on the trail?

The completed section of the Lakefront Trail’s Navy Pier Flyover, which was closed for three weeks for construction, reopened to cyclists and pedestrians on Monday, the city said.

The Chicago Department of Transportation closed the Flyover so the completed portion could be connected to the second phase of the project, which is almost done, the transportation department said in a news release.

The city started building the $64 million flyover project in 2014 to bypass the Lakefront Trail’s dangerous bottleneck near Navy Pier, where the trail continued along the street through a busy intersection at Grand and Illinois streets.

The finished part of the Flyover extends from Ohio Beach and crosses over Grand and Illinois as well as Ogden Slip and DuSable Park.

Work continues on the rest of the Flyover, which includes retrofitting the existing, 1930s-era Lake Shore Drive bridge and cutting paths through the bridge houses.

It's only September, was the temperature that low?

It opened sometime yesterday. Was closed in the morning and opened in the afternoon. It's not finished; there are big plastic barricades on both sides making the new section very narrow. And there's a severe dog-leg between the new path and the bridge sidewalk to navigate.

The mornings have definitely been cooler this week so far.

So glad to have this back up and running.

The last month was a good reminder of how awful and dangerous the intersections at Grand and Illinois are for pedestrians and cyclists. The NP flyover isn't perfect, but it's way better than what we had.

I hope the third phase goes smoothly and look forward to it's completion, and avoiding lower Lake Shore Drive forever.