Ald. Jim Gardiner said he's trying to get the lanes repainted, but the Department of Transportation was unresponsive.

IRVING PARK — Two months after a woman was killed while riding her bicycle along Milwaukee Avenue and pledges were made to improve the safety of a bike lane, nothing has been done. And bike safety activists are upset.

On Nov. 6, 37-year-old Carla Aiello of Norwood Park died after being hit by a dump truck in the 3800 block of North Milwaukee Avenue in Irving Park. Aiello, on her bike, and a truck driven by a 41-year-old man had both been traveling south on Milwaukee, with the bicyclist to the right of the dump truck, according to police.

When the truck driver turned right onto Kilbourn Avenue, it crashed into the Aiello, who rolled underneath the truck and was killed, police said.

Following the tragedy, 200 cyclists returned to the scene to draw attention to the sorry state of the bike lane in the area.

Unfortunately, this appears to be a common problem with bike infrastructure. My understanding (correct me if I'm wrong) is that -- relatively speaking -- it's not all that difficult to find grant money to fund creation of new bike infrastructure, particularly simple stuff like painted bike lanes and sharrows. Such grant money funds the creation, but it's up to the local municipality to maintain the new infrastructure. It's easy to let things slide, particularly considering most municipalities aren't flush with cash.

At my sister's funeral, I met the daughter of one of my mother's acquaintance who was one of Carla's students. I told them how careful I must be when I ride these poorly designed streets and they mentioned Carla's name. I said I went to visit her memorial. Small world :( 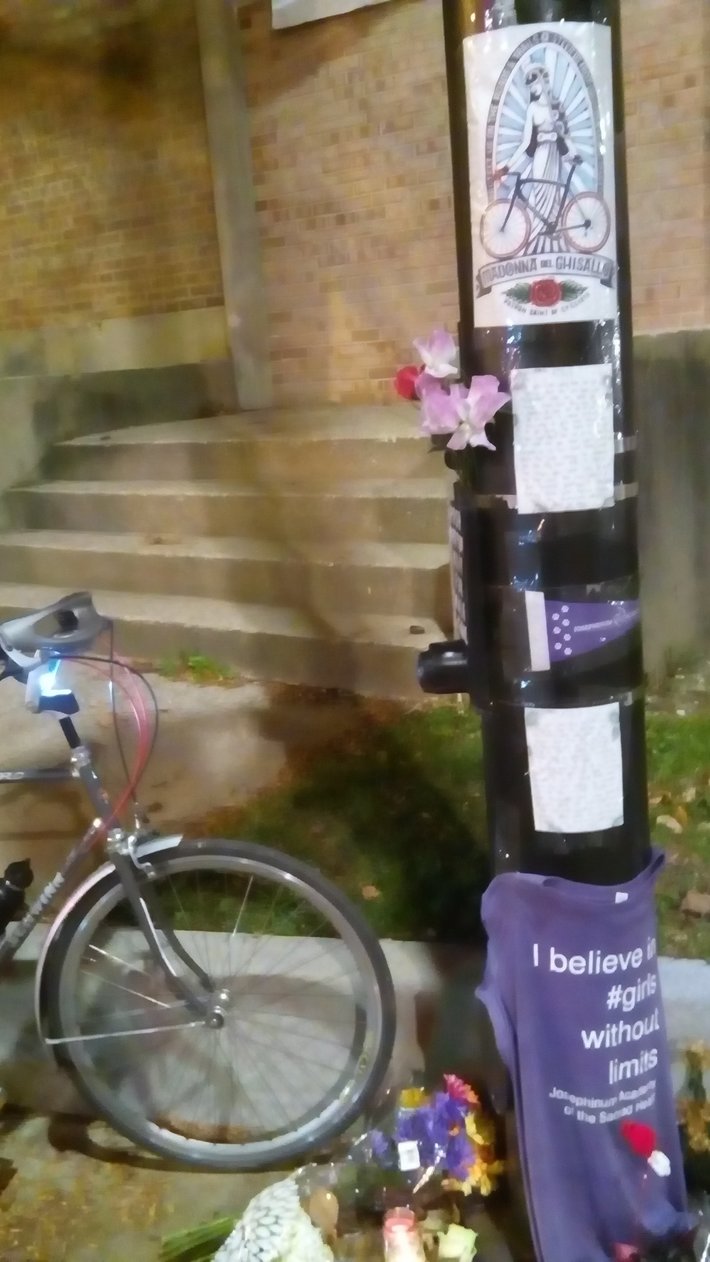 This thread invokes an interesting policy question:  If CDOT somehow got an extra million dollars, would it be better if it was used to build a new bike lane - or - to maintain existing bike lane(s) for x number of months?

While it's an interesting gedanken experiment, I suspect the projects (build vs maintain) would be paid from different pots of money (capital vs expense).

True, especially federal capital dollars have helped contribute to the build side, with the city footing the bill for the maintenance expense, such as it is.  What I'm getting at is we still have our own values/priorities as riders, all while the city crafts both an annual capital and maintenance spend, both funded by taxes and debt.  But when the budget is being crafted, if given the choice, would we rather put a million bucks toward the city's capital bike lane pot of sorts, or a million bucks of maintenance expense on the existing ones?

Yep, so if we had the opportunity to donate a million bucks to one pot of money or the other, would we want:

-a million of maintenance/plowing/painting/sweeping of the existing bike lanes?

I'm not sure. In the case of more traditional infrastructure (roads, sewers, etc), it's completely built out (and we likely have as much as we really need other than for incremental increase to deal with slightly increasing population), but it's crumbling from lack of maintenance. There isn't enough bike infrastructure to support where we really need to be, so more is necessary. By the same token though, what's currently built out needs to be maintained. Most bike infrastructure (sharrows, normal bike lanes) is pretty easy to build. More robust infrastructure (properly curb-protected bike lanes, off-street trails) is more expensive, but still small potatoes compared to road building/resurfacing. A wild guess, but it seems like you shouldn't need to allocate more than 10% of construction figures dedicated to maintenance. Ignored, though, and the process has to start all over again in a few years.

It's been quite awhile since I've ridden down Milwaukee, but ISTR there was significant building construction right along the street a couple years ago. Has that been completed? Was bike infrastructure disrupted along that corridor? If so, was it rebuilt/repaired?

Can we grab some paint and do it ourselves?

I wonder if we can? We probably *can* but hopefully wouldn't get hassled.  From the discussion title, it looks like maintenance is the right answer.