Disturbing story of a cyclist who was struck and killed by a tour bus on the Mag Mile earlier this evening. RIP.

Update at 10:30 PM: the victim was named as 29 year old Blaine Klingenberg. Condolences to his family and friends. 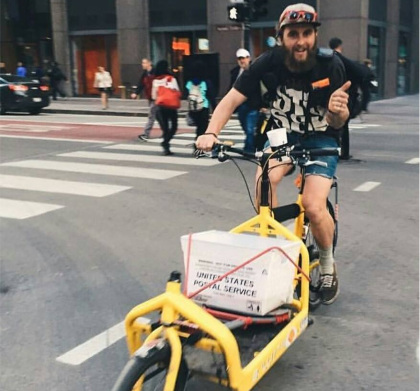 In addition, I hope the city will address the area from a pedestrian and cyclist perspective. It's a high traffic area, entry point to the bike path and yet there isn't any bike lane or way to safely and easily get to the lakefront from there.

There is a pedestrian tunnel at that intersection, but the city closed it a couple of years ago.

Yasmeen, I agree. It's astounding how unfriendly the intersection of Oak and Michigan is to biking, walking and public transit, given the huge volumes of people traversing the area on their way to shopping areas or the beach, and who are not enclosed in private cars. It's a wide and complicated intersection due to the convergence of Inner Lake Shore Drive and the on-ramp to Outer LSD. Both Michigan Avenue and LSD are under the jurisdictions of Illinois Department of Transportation, which has been improving recently in its efforts to design for something other than moving large volumes of fast-moving cars, but this intersection was probably designed decades ago. It is part of the greater Lakeshore Drive corridor that is being currently evaluated in the Redefine the Drive project (I'm on a residents task force for that), but that unfortunately has a projected eight-year timeline.

My condolences to the friends and family of Blaine Klingenberg.

For cryin' out loud, there's at least one stop sign on Clybourn specifically for the bike lane that people ignore...

But yeah...I work at Michigan and Illinois...we just moved from River North, and the best way home for me is the Lakefront Trail...it is *not easy* getting there safely...at one point you have to cut across three lanes to make the turn...and with the path under construction, it's very difficult to navigate pedestrian trafffic too....

I prefer to use Rush/Wabash/State heading north and catch the LFT via the tunnel at North Ave.  It may be a few blocks longer, but is much safer IMO.

From DNAinfo: Blaine Klingenberg, 29, of Logan Square was heading north on Michigan Avenue when he disobeyed a red light and turned into the bus at Michigan Avenue and Oak Street at 5:28 p.m. Wednesday, according to the Cook County Medical Examiner's Office and Officer Michelle Tannehill, a Chicago Police spokeswoman

This is a tragedy. If what we have read is true it is not a crime.  As a community the best we can do is to make good from the tragedy. Maybe one of us will hesitate at the next red light and take a look that saves a life.

There are conflicting stories out there. In some other accounts, the tour bus ALSO had a red light and another direction of traffic had a green turn arrow.

We don't know all the facts here, except that this was a sad loss of life.

Regardless of who's at fault, my heart goes out to Blaine's family and friends. What a tragedy. That picture, his thumbs up smile while crankin' that Bullit, embodies the joy he felt riding a bike.

+1  I didn't know Blaine, though I saw him many times in the Loop. Seeing him riding that Bullitt along Dearborn always made me smile.

My sympathy to his family and friends.

A friend of Blaine's and part of the Chicago messenger community who is starting this page for the sake of Blaine's family and close friends so that they have time and space to grieve instead of working out finances.

Thanks for posting the link to Go Fund Me.