black, white, gray and the rules of the road

I have  followed  some threads here  lately that  have mused  on rules,  laws and whether  they should be  strictly enforced. I have  read thoughtful posts from many and often  at variance with  one another.  I thought  about  those  discussions after this happened  to me this  morning.

“Do you know that you are not supposed to  be riding on the  sidewalk?”

“Yes. I know that. I just got on the sidewalk at the corner over there and rode like a pedestrian to this spot where I  am waiting for some friends.”

“That doesn’t matter, you are not supposed to be riding on the sidewalk,do you know that?”

“Yes, I know that…”   This  conversation  kept revolving around my knowledge  of the law and my affirmation that I  knew  the law and was taking it into account yet  had carefully proceeded on the sidewalk. We were outside a Starbucks at 6:20 am on a Summer  morning with very few people up and  about.

I tried to reassure her that I  had  heard her and was being  mindful that  at the  moment I was on the sidewalk I was an  interloper. She was having none of it. I had  passed a  man  walking on  the sidewalk seconds  before  meeting  her and  had given  him wide  berth. I did not blow by him but slowly rolled past him.  At  the moment I had  passed the man I thought about  the times I roll from the  Dearborn bike lane about 50 feet  to the nearby bike rack letting  any pedestrians safely go by.

My accuser was not a pedestrian.  I think she had just alighted from Starbucks and was getting into her car on the street in  front  of the outdoor tables and chairs where I had hoped to have a few minutes of repose after  my ride from home and before I rode  off  with  my friends towards breakfast. These Wednesday morning rides are a bliss spot on my calendar. I  had  hoped to  lower  my heart rate  from the early morning first  portion of my commute and take in the slowly increasing  workaday movement of the  city,  watching the urban mise en  scene unfold before meeting some good friends. Instead, I was engaged in an arguement  I did not want to have.

“You don’t seem to understand.   You are not  supposed to  be on  the  sidewalk.”

“I really do understand that and think my behavior reflected that I was aware that I wasn’t supposed to be there.  I really am hearing  you.”

“No, you are not hearing  me.  You are not apologizing and do not  seem to  care that  you were on the  sidewalk.”

By this time,  my bliss having  evaporated,  I was  miffed and  felt she was like a booger  I  could not shake off  of the end of my finger.

“No. I really do hear you and notwithstanding  your shrill tone (and she really had one) your message has  come through. Have a good day.”

“You are just  entitled.  You think you can  do whatever  you want.”  I decided not  to  interrupt and sat down  in  one  of the chairs, closed my eyes, drank my water and  tried  in  vain to find  my Zen place which could  not  be  located.

“If you had hit me I would sue you and collect lots of damages and it  would be precedent setting.”

“Listen, one, I would not hit you. When I was  on  the sidewalk I was very conscious  of my fellow humans and  watched  out for them and  I  would  be  careful to  watch  for you. Two, if  I did hit you, you  would be entitled  to damages because I  should  not  hit you  and you are  right that it  would be  my fault and not yours,  but  still, I  am  watching out and  would not  hit you. Three, it would not  be  precedent setting, this has happened before and people  have  recovered.  This is not new. Either way, Yes. I agree that you are right. The pedestrian should  be  protected…”

“You are not listening,” she replied and  by this time she  was absolutely right. For my sanity’s sake I was trying to ignore her but I was not succeeding. She stood outside of her car holding a cigarette butt and continued,  “I  am not going to  throw this  in the street because that is illegal and  I would be fined. I wouldn’t  park here  after [whatever  time she mentioned] or I would get  a  ticket.”

I really tried to listen and really tried to engage at first  and then I really tried  to ignore her and  none of this worked.  I wanted to kill this  conversation and  against my better judgement said, “Hey,  I don’t  know what happened  to you or what  past  trauma is at  play here or driving  this black/white  insistence on  rules,  but  I just  want to  sit and relax, can you just  leave  me alone?  You have been heard. Know that,  Please  leave me alone.”

She got in  her  car but  before  driving  away, she  stopped and  rolled  down  the  passenger  window and gave me her parting  shot, “You set a bad example for children.”

My friends arrived  less than a minute  after she had  left,  each  of them slowly and carefully rolling in on  their bikes, one of them careful to let a  woman with a stroller  pass him by. I  told them  about  my encounter and  we rode off allowing me to  recover  my bliss. We ate outdoors and had a stimulating conversation about a million things none of them pertaining to my earlier  encounter.

Later, when  I got  to the  bike rack outside  my office I  saw a bike locked taking up the entire  rack which could have housed  at  least  four  bikes.  I was miffed and commented  to  a  fellow rider  who was  also just locking  up that the blocker  was an “entitled  asshole” . Where did that come from? Why did I say that? I  think I  was  unfairly categorizing the unknown rider because I was still salty from my chat with the  Sidewalk Nazi. I  gently moved  the  bike into a  more perpendicular positon to allow other  bikes and  was  careful to make sure the  bike was still standing  and locked to the rack.  While we were both still locking up a guy came to  unlock the offending bike.  We barely looked at each other. I kept my mouth shut and went to work while he rode away.

Thanks for sharing this experience. It's funny, I've come to realize this is either a Chicago thing or a Midwestern thing - this need to correct and shame people when we see them doing something we disagree with. I don't know the "why" behind it but it's not like this everywhere.

I've started calling it "DC nice" that in the DC area, people tend to mind their own business and don't tell you yours nearly as much. Sure, it occasionally happens but it's kinda shocking when it does because people don't do that here. Riding on the sidewalks? There aren't as many bike lanes and drivers are more dangerous/reckless here so I'll pop onto sidewalks when I feel it's necessary. I've only been scolded once.

I laugh because if you do that in Chicago, even very briefly, chances are you will be asked if you are 10 years old because only children are allowed. I remember when I'd pop the curb to ride halfway down a block to my apartment, I'd regularly get yelled at by motorists (who weren't impacted by me in any way). I've also seen other cyclists shame people for riding on the sidewalk.

That said, this lady really acted like a dog with a bone, refusing to let it go. you acknowledged her but she decided apparently she knew more about your devious intentions than you did (sigh).

I've come to realize I prefer the mind my own business method but being from Chicago, I am not always so good at keeping my own sassy lip buttoned. Sometimes words escape that are judgy. I am actively working on it. :-)

I find that a vocal critic's knowledge of the law usually is incorrect.

"You are not supposed to be on the sidewalk.”

“I would sue you and collect lots of damages and it would be precedent setting.”

Sweet, more legal opinions. Can I see your bar card?

I would have LOL at "You are not apologizing" and “You are just entitled." Oh, the irony!

“I am not going to throw this in the street because that is illegal and I would be fined."

But if littering were legal, she would do it all the time. We can all rest assured that she didn't smoke near the Starbuck's entrance or speed, roll a stop sign, or change lanes without signaling on her entire drive home.

The proper response is, "I'm very sorry, but i do not speak English," and walk away. Obviously, this woman was out to spoil someone's day and was looking for an argument to win.

of course, "Please leave me alone." is a great response. Too bad you didn't lead off with  it.

The woman didn't like you being on the sidewalk because that made it harder for her to run you over.

Timely thread (and a great read, thank you).

This morning a Divvy rider shoaled me and several others at a red light. Of course, we all passed him in short order.

Next light, he shoaled again. I started telling him off, but it turned out that this time he was just moving up to the crosswalk to dismount and end his ride. I felt like a jerk and decided I should have just kept my mouth shut. 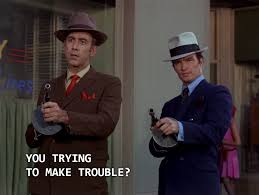 I admire your self control. I think I would have stopped responding to her much earlier, or told her to get lost.

A bad example for children!! Oh, the horror.

Permalink Reply by Maurice on June 28, 2018 at 1:05pm
Smoking sets a good example for children, apparently.

Thank you for posting this.  This does seem to fit into the current debate about whether we should respond to angry uncivil actions with civility.  Other options are to go low, or not respond.  Although the main stream discussion is on topics of national politics, I think it applies universally.  I have read some columnists views on this and am sometimes surprised on what side the land on with the issue.  They are informed by the stream of hate mail they get as part of their job, so the have all been thinking about it for a long time.

While I do like the idea of responding with respect and rationality, and yours is a perfect example, I wonder what is a reasonable expected outcome.  In one of the recent columns the author wrote "Angry people don't want to be engaged.  They want to be right."  Your story supports that.

I am glad you responded the way you did, and I hope I can do as well when i find myself in as similar situation.  I think that once it is clear the other person only want to be right, then i will stop trying and either shut up or just say "Of course you are right.  I apologize." and end it.