Interesting article in Streetsblog about how scooters are way more popular than dockless bikes in Charlotte (although not everywhere).  Maybe this is the future of the urban transposphere.  I'm inclined to think that in America, any form of transportation that requires absolutely no physical exertion has an edge.

I think it's going to evolve into some combination of both.

eScooters have taken over DC. This morning I took a different route and it was Apocalypse Now but with eScooters. I hate to say it but when they shoot up a hill I'm struggling up, I feel like they are cheating as they fly past me. My little dog hates them (she barks like crazy, especially if they are on the sidewalk).

Nothing but laziness for all involved. It would be better if they were pedal-assist e-bikes.

At last month's Critical Mass, an E-scooter rider showed up adamantly wanting to ride with us despite a few old timers giving the person a hard time for not being human powered. It looks like these lazy alternative transportation peeps are here to stay or at least when their batteries run out or catch on fire.

I dunno. I kinda like anything that's not powered by an engine, be it a Segway, a Tesla, rollerblades, or a horse. We ceed an awful lot of space, and spend an awful amount of money supporting "traditional" vehicles. "Alternative" modes of transportation have their place. We're on the same side in a lot of respects. Why oppose them?

I just struggle with where we draw the line.  What's the difference between this sort of scooter, and say an electric moped where the person sits (assuming the e-moped is also speed-limited)?  I doubt many cyclists would have been cool with sharing the lane with an electric moped in the past, and I know I rant whenever a motorcycle or traditional moped cuts into the lanes, so not sure why these should automatically be treated different without any sort of conversation.

As for letting them ride on the sidewalk, no thanks.

Sure, e-scooters are limited to 20 mph, which isn't as bad in terms of dealing with them in a bike lane.  But, that's still faster than many would be on a bicycle, and there's been little to no learning curve for people before these things were thrown in the mix.  Chicago doesn't seem to really be facing a huge issue yet, but it feels like it's coming.

What you're describing is an ebike without pedal assist, and they're already out there.  Under Illinois law (not Chicago ordinance), they are already legal everywhere traditional bikes are allowed.  The ebike lobby wants nothing less than for fully-powered ebikes to be able to use every bike lane and trail, going at speeds far greater than those of most bicyclists.  I hope Chicago holds out, but a few checks to campaign funds will probably do the trick for the ebikes.

Permalink Reply by Jaik S. on September 7, 2018 at 8:50am
I saw a Bird Scooter for the first time yesterday. It was in my parking garage. I checked their website and couldn't find any information about them being distributed here, or even available as a service. I've heard mention in the past month though. I downloaded the app and scanned the locked scooter and it said it was disabled due to current weather conditions. I think it's ridiculous to lock up a shared item like that, especially when you can't even use it.

A few minutes after I took the photo a guy came out, unlocked it and scooted away. Thinking back, the scooter was way too clean to be something that people share...it was probably some sort of test pilot scooter.

Also, my edit buttons are gone and I can't upload a photo to this post(or format text)

Edit buttons are back, here's the photo. 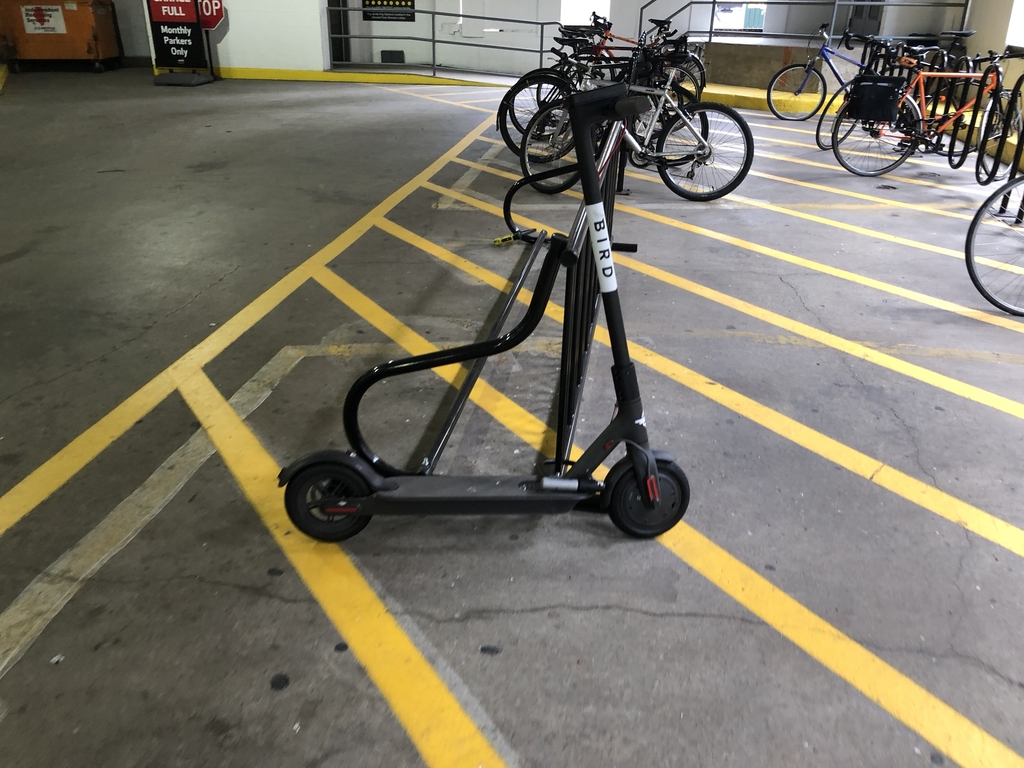 I see one locked up downtown on Wabash now and then, too. Maybe they're pilots. Haven't seen any on the lakefront path's northern end, yet, though the lack of a path at the moment may be part of the reason.