This reminds me of the flags they used to have on kids bikes. Ridiculous to expect adults to add these flags to their bikes. This sounds like victim blaming. 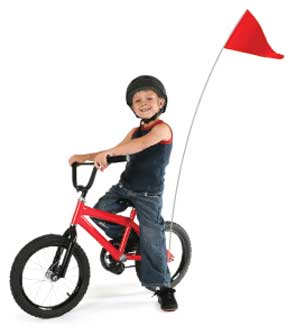 The proposed “safety measure” is a thinly-veiled attempt to get people on bikes off of the roads.

A bill recently introduced in the state of Missouri would require anyone riding a bike on lettered county roads – all of Missouri’s rural highways – to fly a fluorescent orange flag. The flag would have to be “not less than fifteen feet above the motorway when the bicycle is standing upright.”

Let’s say we decide to believe that the bill is intended to improve safety conditions for cyclists by improving their visibility. That line of thinking still falls squarely into the victim-blaming approach that says people on bikes should be responsible for not getting themselves hit by cars, instead of the drivers being responsible for not hitting people with their cars.

No surprise really. Ever been on a Missouri back road? You think Chicago area drivers are hostile to bikes?

There's a reason why the St. Louis randonneur club holds its brevets in Illinois...

Wow. That's really sad to hear. I wonder what makes the difference - how some states have hostile drivers. My experiences on farm roads in Wisconsin have been great. Drivers are mostly friendly and accommodating. I use a rear blinking light when I ride on the farm roads - no shoulder, no bike lane so I want to make sure I am visible.

i think that too many folks out there have wells that are a bit too close to the septic tanks.

But, kidding aside, there seems to be increasing tendency toward victim blaming with regard to cyclists. IIRC, Montana requires riders to wear "safety" vests... other places are looking at mandatory helmet usage, just for examples. Call me paranoid, but i believe that this may just be due to pressure from insurance lobbies as a way of avoiding payouts, as in "the rider wasn't complying to safety law... to bad, so sad."

When will Missouri pass a law requiring people to wear bullet-proof vests?

Yasmeen, Wisconsin has a great rural road network largely through the efforts of the Wisconsin Dairy Board. The roads tend to be wider and better maintained than many other states. Missouri's rural roads -in my experience in the eastern part of the state, anyway- tend to be rather narrow and on the rougher side with many blind corners. The drivers there also seem to be -let's just say- rougher hewn than in some places. In my experience, in Wisconsin folks tend to be more "progressive" in their attitudes than in some others i've encountered.

The attitude comes about, I think, because autos are used for transportation, while bicycles are for recreation (in their minds).  They equate cycling with, e.g., playing ball in the street.  OTOH, a driver is someone who needs to get somewhere.

15 Feet?    That seems to be so high that no one would really see it and would make riding (with the drag) impossible.

@STLbicycleworks is ready for the new law.

Thanks for sharing. The picture is very effective in visualizing the "flair" they are recommending for all bikes and how completely ridiculous it is. Missouri 43rd District Republican Representative Jay Houghton previously co-sponsored a bill in 2013 to ban bikes in the state of Missouri. He sounds like a keeper.

I could imagine a protest ride with hundreds of bikes brandishing such flags but having a coherent message about the true intent of  the law serialized from flag to flag. The first riders in line would be youngsters with training  wheels and the riders would be lined up by age with octogenarians at the back driving home the message.  The riders would be a  multi colored group of men and  women that would  cover every age group and use the flags to show the folly in the proposed legislation.  I would ride through a certain St. Louis suburb. Maybe Slow Roll would be interested.