A pedestrian bridge is being planned for Pratt Boulevard over the North Shore Channel, connecting West Ridge to Lincolnwood for those on foot or bicycle.

The Village of Lincolnwood is taking the lead on the pedestrian bridge, which would span the North Shore Channel and make for a continuous bike path between the lakefront and the popular pedestrian paths in the suburbs.

Plans call for a 16-foot-wide pedestrian bridge that would connect to Pratt Boulevard on both sides of the channel and to the existing recreation path on the Lincolnwood side of the channel. At that width, the bridge would be able to be accessed by emergency vehicles, according to a Village of Lincolnwood presentation on the project. Interesting. I'm not one to poo poo new bike infrastructure, but this seems rather close to the recently completed bridge just north of Lincoln. Looking at Lincolnwood in Google Maps with the bike goggles on, it seems like connecting the Lincoln Trail and the Valley Line Trail would have a bigger payoff.

Also, I know this is south of Lincolnwood proper, but it seems connection the Valley Line Trail with the North Branch Trail would be useful. There's no pedestrian/bike friendly way to cross the North Branch of the Chicago River in that area, effectively cutting off Lincolnwood (maybe N Forest Glen?) Been awhile since I went through there. I recall getting all turned around trying to find a way across the river.

Joining the North Branch Trail to the Valley Line Trail, going across the river is a scant 2000-FOOT trail of the Weber Spur Trail.

Presently, you need to lift your bicycle over a jersey-barrier wall preventing you from taking that path.  What would it take to get that barrier removed?  Even riding 2000-feet on gravel rather than the pavement isn't that hard.

Just over 5 years ago there was a meeting about the Weber Spur held at North Park College.  Nothing has happened since.

Where is the Weber Spur Trail? I can't find it in Google Maps. Here's what I see. The Valley Line Trail ends norfh of the river (just below Deljo Heating & Cooling below), while the North Branch Trail runs south of it. I see that I can get near the river using paths in LaBagh Woods, but I see nothing there which crosses the river. 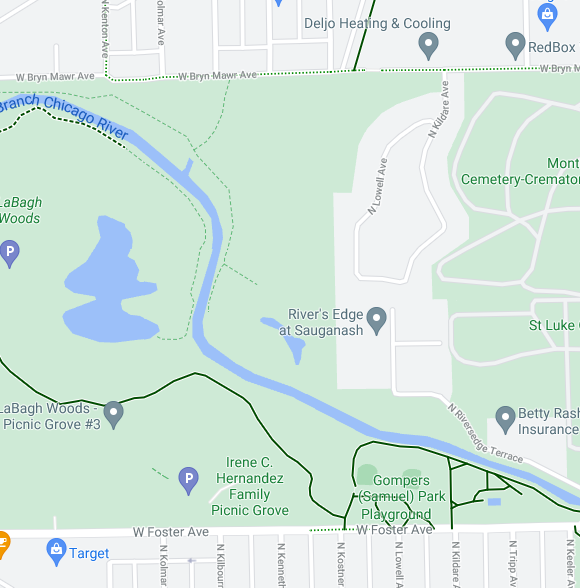 You can't see it because it doesn't exist - yet.  It's just an abandoned railroad line from the Union Pacific.  Use the Google Map satellite view. 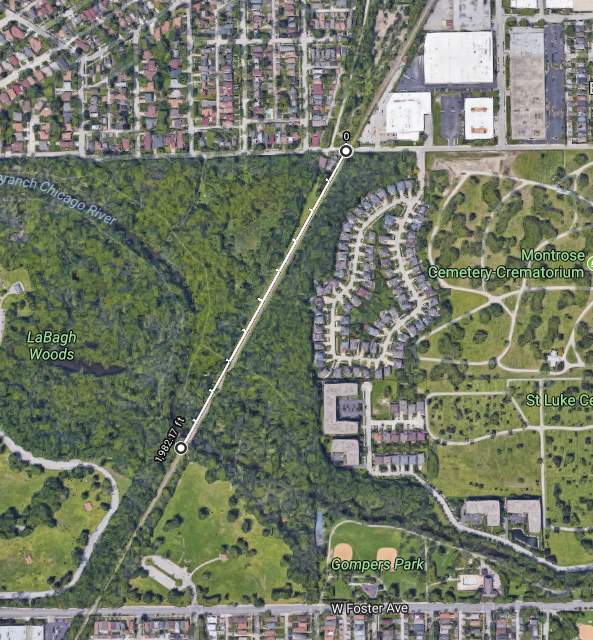 Long before the new North Branch Trail was constructed, planning was in place for the Weber Spur: 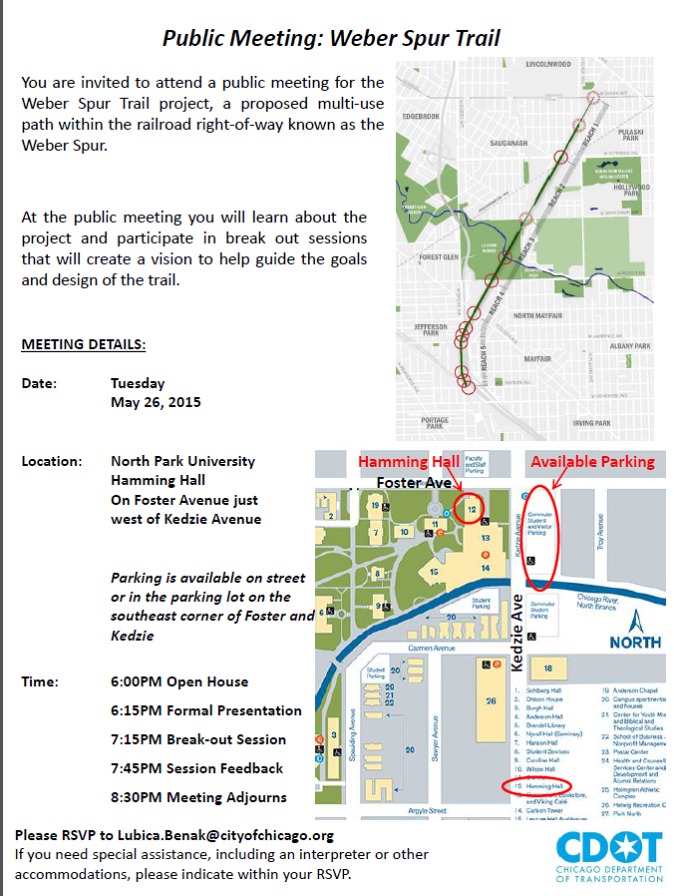 Here's the barrier wall to climb over: 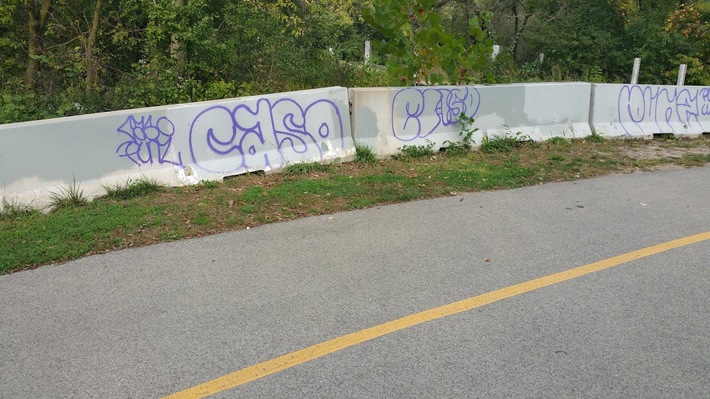 Even Rep. Mike Quigley (with the hat) inspected this path! 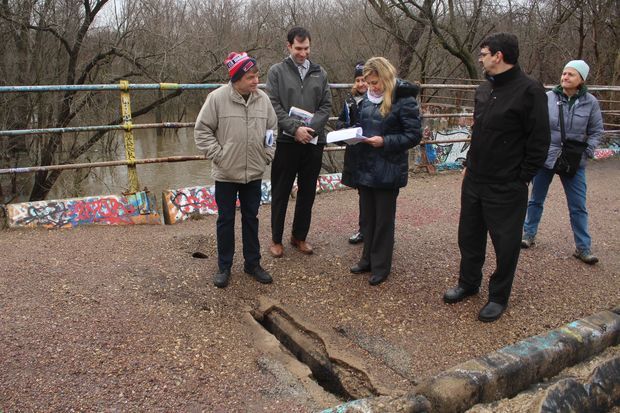 I suppose there's a Very Good Reason™ for the delay...

Arguments about the Weber Spur aside, it has to be noted that the little Village of Lincolnwood has gotten more bike infrastructure accomplished (or more impressive anyway) than the city of Chicago in the 23 years I've lived here.

I would love to hear from someone with more inside "guvmint" experience how funds get divided and then used or wasted.  As far as I understand, the forest preserves, the village of Lincolnwood, and the city of Chicago all reside within Cook Co.  In the last 10 years, I can recall the following bicycle infracture projects:

The forest preserve in LaBagh woods pulled off a huge win with the extension of the North Branch trail:  paved trail through woods, complete reconstruction of Cicero underpass, the massive bridge over the Metra tracks, and the bridge over the river so that you never have to ride on Central anymore to get into the parking lot for Thaddeus L Woods.

The Village of Lincolnwood has paved the Weber Spur/Union Pacific path from Devon to Touhy (and added emergency phone kiosks for added POM security), completed the paved Valley Line Trail from Bryn Mawr to Dempster, built the huge and well done bridge over Touhy on the Valley Line Trail, "Bernie's bridge" over the river on the North Shore Channel Trail, and is now looking at a second bridge over the river.

The city of Chicago has (almost) completed the Navy Pier flyover, added a bunch of plastic bollard bike lanes (the majority of which have been run over) and lately has been adding poorly designed strips of concrete to essentially create a garbage gutter for bikes to ride in (in months with no snow) along a couple parts of the northside angle arteries of Elston, Milwaukee, and Clybourn.  (The seperation efforts of the Lake Front Trail don't count as that was paid primarlily by and for Ken Griffin)

These ovservances are from a northsider perspective.  I'm not up on southside improvements but am at least aware that the project in Big Marsh is in some part funded with Chicago Park District Funds.

In any event, my observance is that Lincolnwood gets the most bang for their buck per resident (2019 data says population 12K!) and isn't resting on their laurels.  My question to anyone who can venture a better educated guess than me is:  How?  How can this litte parcel of Cook Co get so much done, done well, and done quickly and the city of Chicago takes forever with some projects (NP flyover) and does half-assed short-sighted other projects (separated bike lanes with no means or thought towards maintenance)?

Just a guess, but large (relative to its size) corporate tax base. I'm sure Lincolnwood Town Center isn't quite what it once was, but that, coupled with the businesses along Touhy and Lincoln would seem to be a fairly large amount of corporate tax generating power for the 12k residents.

Dirke is right on about the gutter trash design of Clybourn, i.e. that CDOT Special from Division to North Ave. which eliminated usable space for both cars and bikes and then squeezed bikes and cars into an even narrower space.  We've identified and lamented here on Chainlink the lack of gutter maintenance there and elsewhere (Elston) on these pages, all while the city is in massive debt and is not going to revisit their punitive parking system any time soon to raise cash for machines and workers to adequately maintain these spaces.

For the proposed bridge of the channel, it will be important to manage the problematic mode mixing that elsewhere CDOT is also famous for (see Milwaukee Avenue truck route + bike lane = collisions) which in the instance of a park district project leads to this:

I think the proposed bridge will  service pedestrians getting  from the lines  of  condos on  Kedzie that are  mainly owned by seniors. It will  allow them  to  get to all the commerce along McCormick and to get to the  park. It will  also  make it  easier to get to the little  9 hole disc golf course. The bridge will  be the  only cross to the  Channel trail that does not  ask riders to either  ride on  a sidewalk or on  a major  thoroughfare such  as Howard,  Touhy or  Devon.  I  also think it allows Orthodox Jews in  West  Rodgers Park to  walk to the  park on Saturday afternoons. I am not  sure  I  will  use it  much  but it helps.