Chicago ranked near bottom of list of bike-friendly big cities

From the Active Transportation Alliance:

One point the article makes:

reminds me of a Not Just Bikes video I saw recently. Worth a view in my opinion. In fact, the entire channel is interesting (to me, at least).

Does Chicago have shortcomings as  a city for bikes? Uh, yes. No question.  Is Chicago a bottom  feeder in this regard? I  have a hard time believing that. The  assumptions leading to  "high  stress" riding seem to create stress in  places where it does not  exist or where it is either  rare or mild. I  was surprised at the comparison  of Evanston and  Schaumburg with  the latter  city getting  the best rating. Schaumburg  is in  an  area  where there are very high  stress roads and low stress neighborhoods.  The  connection  between those hoods requires the high  stress routes.  I see Evanston's  map and am  struck  by Church  street which has a  lane that is well  marked  and  in  areas protected is mostly seen as high stress and that  baffles me. I look at Chicago and  see my  normal  commuting  route  on Lincoln Ave. is  deemed high  stress. Higher than a side street? Yes. Equal  to Ashland which has two lanes for motorized vehicles in  each  direction?  Not a chance. I take the rating  with a grain  of salt as a warning that there is  much more to  do and at the same time I take it as useless information  attempting  to  compare anything to  everything and  back  again to nothing.  My  $.02.

Touting Schaumburg above Evanston is a real head scratcher to me, because most streets in Evanston are quite rideable while many in Schaumburg are far from it.

I look at this rating in comparison to where we were several years ago, and my interpretation is that Chicago has fallen behind the curve in terms of making bike improvements. Many other cities have done a LOT more in that time and we haven't kept up.

I visited Minneapolis a couple of years ago and was very impressed with their bike route network - in terms of infrastructure as well as features like bike route designations being on street signs. Compared to Chicago, it seemed like their route network was better connected. They also had some excellent rail trails going into the city, with a bike station (shop with service and cafe, plus secure bike parking, showers and lockers - similar to the Millennium Park bike station). They have bike lockers at a bunch of transit stations.

It is interesting to observe that Detroit (a.k.a. the Motor City) is ranked just above Schaumburg. See also Traverse City, MI. The insight there is that so-called car culture isn't actually the impediment people imagine.  Munich and Berlin (land of the Autobahn, with unlimited auto speeds on parts of it) rank even higher, though comparing both cycling and driving with other countries is fraught with peril.  Meanwhile, Hayward, WI ranks higher than Chicago.

The key to winning here at home is separate trails versus PBLs. PBLs on the Autobahn don't make sense. Instead, think LFT.  Or again, Hayward Wisconsin.  Some separate trails: https://haywardlakes.com/biking/

Another key back here at home is to have the bikes where the cars aren't, and the Chicago style concrete PBL doesn't do that, for a number of reasons.

I went to summer camp in Hayward, WI 30+ years ago.  The fresh water fishing hall of fame is housed in a giant muskie there. 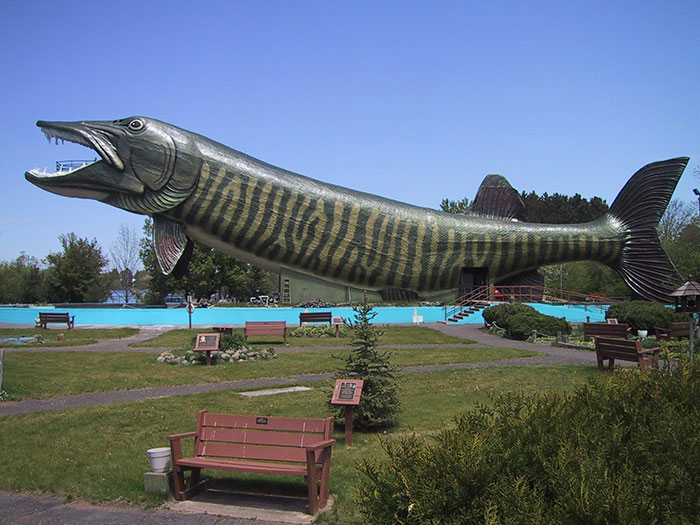 Wow.  I think there's a walleye in MN and a catfish in one of the Dakotas.  We could take a summer off, get a travel rod, and see 'em all!

Maybe they factored in that Chicago spent at least $64 million on a single hugely localized project rather than spreading money all over the city to promote biking in general. Since those heady days when Chicago was being written up as a veritable biking Mecca (which it never was), the momentum has largely been lost. The best accomplishment, arguably, has been the separation of the paths on the lakefront, which was accomplished only because the money was donated.

Agreed Jim.  The same people steering all of this brought about the $700,000 debacle on Dickens with federal debt (another CDOT special) and the $280million 95th Street bus & 'el stop as well, all while unmaintained PBLs leave cyclists back sharing narrower space with cars.  Meanwhile, Dickens, or a $700 bike for a thousand people.  The flyover, or that bike for ninety thousand people.  The 'el stop, or a bike for four hundred thousand people.

Of course a $700 bike (well, half a million of them per above) doesn't solve everything, and may not move the needle enough on that survey's metrics either.  Nor am I trading in my Pinarello for one.  But the point is CDOT and the people who are part of their, er, "alliance" as it's generously called, have neither the abilities nor our best interests at heart as the record reflects.