I'm not a regular cyclist here in Chicago, but I joined Chainlink because I'm interested in cycling and planning issues. I wanted to pose a question to the group.

I ride the L every day (the Pink Line) and I've repeatedly seen cyclists bring their bikes on, sit down in a seat, hold their bikes in front of them, and as a result take up three seats. I just saw someone do that today on my ride in (around 9:30 AM), and I have to say I find it infuriating. It's not rush hour, but the train is still fairly full. It's not fair that three people need to stand because someone with a bike thinks it's necessary to do a Sudoku puzzle rather than stand in the door area with his bike.

Again, I've seen this happen a number of times so it's not just one random thoughtless guy. Is not sitting with your bike something that's part of regular cycling etiquette? Should I contact the CTA? Any ideas or feedback would be appreciated.

Have you tried to (nicely) approach the cyclist who takes up the space?

As someone who has had to take the L with a bike on occasion, I would say part of the problem is that there is not a great place to be on the train with your bike.

You can either sit and take up 3 seats and get dirty looks, or stand by the doorway and get dirty looks from people when they have to squeeze by your bike to get off.  I often take the seat, as people often seem to be even more bugged by having me near the exit.  Luckily, on the stretch of blue line I generally ride, the lighter crowds make it not as big of an issue.

Exactly. On the newer style El cars, there isn't a good place to put bikes except to hold them in front of you as you sit in a seat, unless the wheelchair space near the door is available.

I'd much rather do that (preferably in the corner, where I'm affecting the smallest possible number of people) than block the doorway

Unless it's a SMALL bike, like a folding bike, it usually does take up 3 spaces. As long as it's NOT during a rush hour blackout (7-9 am, 4-6 pm), this is legal and allowed. Unless you have a disability and really need to sit (and there isn't other available space, that person has a right to the seat.

The L cars were not configured for bicycles.  I was in Portland and each car on their commuter trains had 2 of these (4 bikes/car). It'd be nice if they put those here. 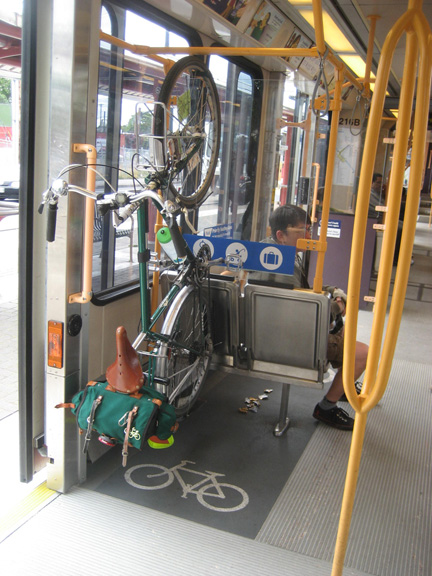 Permalink Reply by Jim Reho on December 1, 2015 at 8:53am
That's a nice idea. Just one of those on CTA train cars would be great. I'm not holding my breath.

I've also seen these on trips to Portland. These would be SUCH a smart addition.

Permalink Reply by Tim Heckman on December 1, 2015 at 10:44pm
Those racks on the Minneapolis trains are nice.
Attachments:

Bike racks on CTA trains?  Good luck with that.  There aren't even luggage racks on the Blue or Orange lines.

On the older Brown Line cars, there are two seats by each door facing the aisle.  Of these four, one of them is only one seat, the others are two seats.  If you can get on at the end of the line and try to get on the first or last car and snatch one of these seats your the best off.

Last summer I took the Red Line, with the newer cars, to the south side to ride with the Slow Roll group on the south side.  I did ride up to Howard, so I could get on at the start.  I thought the fewer seats with more standing room would be a problem.  It turned out better than I thought.

In the seat facing the door I could BACK the bike into the seat at the corner, and turn the front as far as possible, I could bungee the bike in this position and not have to hold it.  If the train really got crowded I could sit in the seat where my bike was attached with my feet spread across the rear tire.

Again, this only works when you get on at the end terminal.  On the Brown Line, there is only one end (Kimball) and I've found leaving downtown in the evening it's best to get on at Washington and Wells, and leaving in the morning to get one at Clark and Lake.

I've also taken Metra, and in that case your blocking three or four seats to bungee your bike where they want you to tie it down.

I take a dim view of those hanging bike racks.  They eliminate any seating possibility when there are no bikes on the train, and it's rare to see a lot of bikes on the train in Chicago.  Also, they usually require lifting the bike to hang it, and this can be an issue for senior citizens that ride heavy bikes.  So the bike racks like Portland or Minneapolis aren't very attractive to me and I wouldn't want to see them installed on the CTA trains.

Taking the Red Line to 95th for a Sunday morning Slow Roll ride, I got on at Fullerton.  That worked out well because after that stop, the doors only opened on the left through downtown.  I was able to stand in front of doors on the right side and was out of the way of people getting on and off.  After downtown, the train was less crowded and I was able to bungee my bike in the aisle to the vertical posts and not obstruct other passengers.

Of course, when I got to 95th Street, the elevator was broken and I had to carry my bike up the stairs.