Watch for painted pavement on ice - like green bike lanes and crosswalks! 3 Replies

You need to be a member of Snow Riders! to add comments!

Comment by Vilda on July 22, 2010 at 8:32pm
Craig you do know you live in Chicago right? ;-) It snows. ;-) I didn't need studs the last two winters (shoudla since 2 winters ago was when daley was saving money on salt) I just use big fatty MTN bike tires.

Kevin, you and me can make this happen! Thinks cold thoughts! ;-)

That being said, I plan to get some studs for my mountain bike and snow riding this winter.... 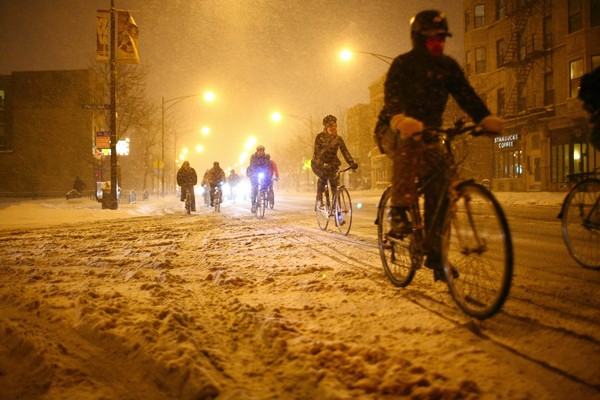 Blame it on brain freeze
How else do you explain bicycling in a blizzard?

Is winter really the time for a bike ride? Some people say yes.

There is a certain kind of person who comes upon an evening when falling snow is creating near-blizzard conditions, more than 600 flights have been canceled at O'Hare and the side streets are being reduced to two tire tracks through the snow, and thinks:

What a great night for a bike ride.

And when I was sailing through the intersection of Damen and Milwaukee avenues, the snow in my face and one of my new biking buddies yelling through the falling ice needles, "Is this winter, or is it just me?", that was the kind of person I was.

How to explain the appeal of snow biking? Is it the challenge, the camaraderie or the beer? Whatever the draw, it pulls a small core of hardy winter cyclists onto the streets in what has become an urban biking tradition.

On any night when there are at least 2 inches of snow on the ground, cyclists meet either at the bike-friendly Handlebar Bar & Grill in Wicker Park or at The Corner, a Bucktown bar, for what feels like a cross between a Critical Mass ride and cross-country skiing.

And because Feb. 9 was just such a night, I brought my bike and my carefully dressed self to Handlebar to experience snow biking. There were only three of us, though more showed up later, but Garrett Padera, 18, a freshman at the University of Illinois at Chicago, told us about the Corner gathering.

Sam Swett, 35, who lives in Ukrainian Village, led us there, taking a side street that would normally be an excellent route to the nearby bar. In the snow, it was something else.

"It's like biking through sand," Swett said as we pedaled hard and went slow. I fell behind, my tires wiggling back and forth. I lasted a few more moments, following the tracks left by cars' tire treads, but when I had to bike around a double-parked SUV, down I went.

Swett and Padera kindly waited for me, and we set off again, sometimes riding, sometimes putting one foot down and pushing ourselves through the snow. A car crept behind me as I wavered. It was hard to tell who was more scared, me or the driver, though my money was on me.

People walking through the snow gaped at us. "That's got to be impossible," one said as we passed.

But when we made it to the Corner, we found it crowded with veteran snow bikers who were generous with both beer and advice.

"You have to expect that you will not go anywhere fast," said Clifford Carson, 43, of Humboldt Park.

Even they sometimes fall down; even they get scared (a danger in itself, said Ignaczak: "When you get scared, the cars get scared."). But they ride through the snow for the fun, for the elite street biker pride and for the beauty.

"You can ride through the park and it's lovely," said John Ladner, 45, of Lincoln Square. "And quiet. The snow muffles every sound."

We trooped outside, brushed the snow off our bikes and, in a long line that looked like a snake dotted with blinking red lights, we were off.

My wheels still wavered, along with my courage, until we turned onto larger streets. But then, now that I was within the comforting protection of the pack, came exhilaration.

Icy needles pummeled our faces; snow blew onto us off parked cars. Snow collected on my glasses. Cars honked support, or at least I think that's what they were honking.

My fellow snow riders -- there were 17 of us now -- whooped and sang as we rode east and south, hitting Armitage, Damen and Milwaukee avenues, then turning west again on Division Street. While I held my handlebars in a death grip, one fellow rode no-hands, flapping his arms like a snow bird.

The guys -- and they were all guys; riding a bicycle through the snow for hours at night doesn't seem to appear to gals -- kept a protective eye out for the newbie in their midst. Ignaczak was riding next to me when I heard an extremely loud engine coming up fast from behind.

"Is that a snow plow?" I asked nervously.

But I survived, and I loved it -- right up until I had to peel off at Division and Damen to get back to where I had parked my car. Snow biking wasn't nearly as much fun alone. In fact, as I made my lone way along icy, high-traffic streets because I couldn't navigate the snowy side streets, it felt pretty scary.

What's more, I ended up missing the group's stop for chicken wings and the 11 p.m. end-of-ride sledding in Humboldt Park.

But next time it snows, I'll get another chance.

When: By informal agreement, snow rides go out any time more than 2 inches of snow falls.

Tips: Dress to keep dry and warm (but not hot; remember, you are biking). I wished I had ski goggles. Consider how you are going to get home. Itineraries are not planned in advance. You won't know where or when the ride will end, or at what point you might want to leave.

Fair warning: Be prepared to ride alone to your car, home or public transportation. And if you transport your bike inside your car, brush off the snow and bring tarps and towels. My car's back seats are still damp.

It was and shall always be
a bike-winter-friendly city.

Comment by Liz W. Durham on January 7, 2010 at 11:07pm
Side street I was riding on this afternoon was a mess!! It was faster to walk than it was to slide all over with my bike. 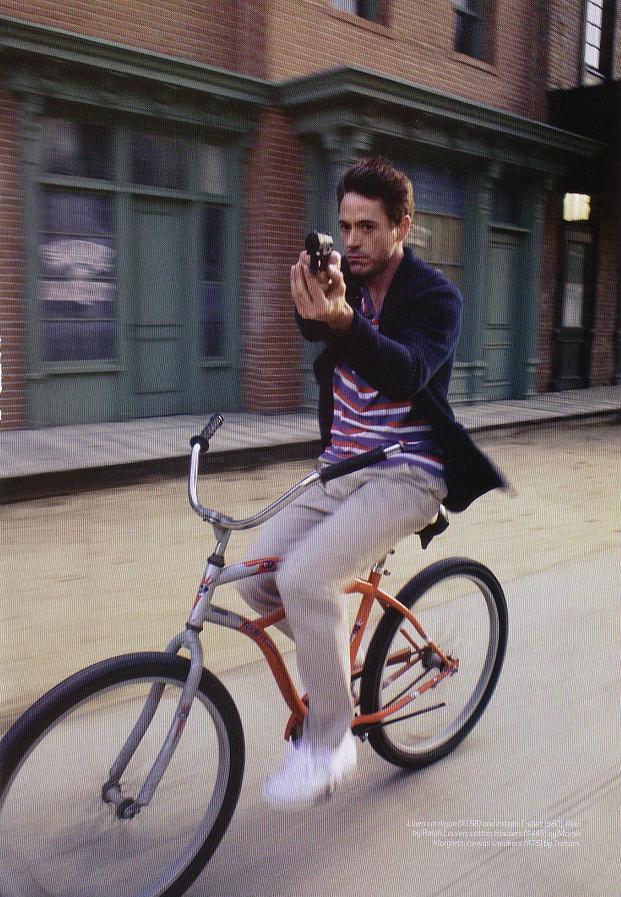