Today is one of those really tough bike commute days. Did you ride today?

Here's an article with 11 motivators for sticking to your winter commute including: fewer sick days, calories burned, bragging rights...

I've noticed many FAT tire bikes in the article. I had to pull out my own version to make it through those piles out there. It's a joy. 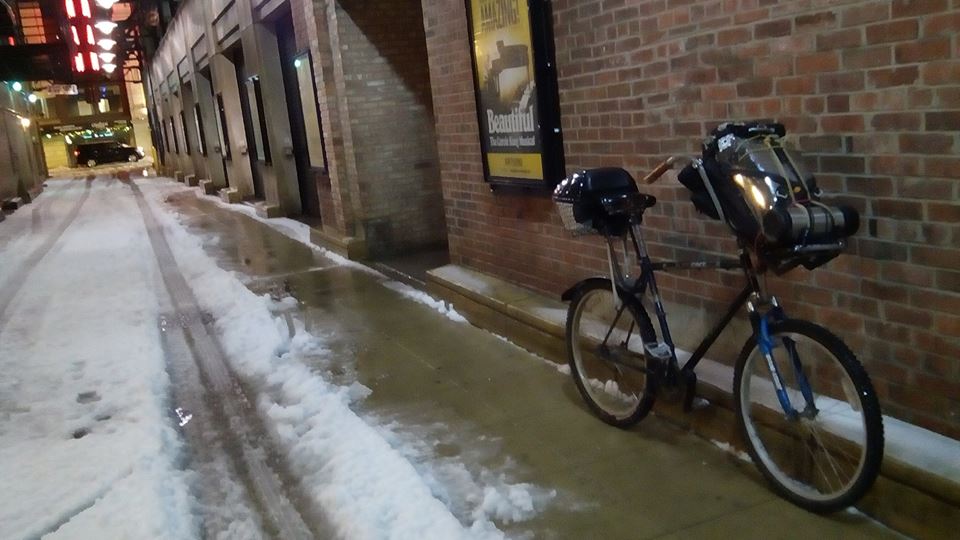 Permalink Reply by Tim Heckman on December 29, 2015 at 2:47pm
I rode morning and evening yesterday, and today as well. Yesterday morning wasn't awful, but eastbound in the evening was terrible. But it stopped raining right as I got on the bike-- and started again-- hard-- after one mile. I'm looking at the roads, and trying to decide if it is time to put the studded tires on. I think it is.

Permalink Reply by V W on December 30, 2015 at 7:41am
I ride everyday. I've been at the point where I don't consider anything else an option. If I get a ride it's because someone else insisted, unless I'm hauling a lot of stuff or going long distance I don't ever consider a car a convenience. I just feel so much more secure having my bike around and having the freedom and independence to come and go as I please with my bike.

This is mostly me, but I didn't ride on Monday. If I ride every day regardless, I will fall. I don't want to fall anymore. So sometimes (bad storm or ice), for safety, I leave the bike at home.

I was out doing some errands as a ped in that $#@! and decided against riding to work that night. Thick slushy uncleared lanes, drivers not even pretending to stop, lakes at all the intersections, and pelting sleet? No thanks.

Live to ride another day.

Permalink Reply by V W on December 31, 2015 at 1:35pm
Yeah I do occasionally slip and fall and do worry about cars not watching out for me- but to me it still beats the other alternatives of public transportation or driving.

I have studded tires, and ride year round, but I stayed off the bike on Monday and Wednesday.  I've learned that no matter how confident I am on my bike in active snow, I can't control how the car handles that still speeds and then proceeds to slip out in an intersection.

The interesting thing is that when I rode on Tuesday, I expected the protected bike lane on Lake to be horrible.  Traditionally they never plowed it until days after a big snow event (if at all), as a normal plow truck couldn't fit in the lane.  This year, though, they took out the protected-lane bollards for the winter.  Sure enough, it was plowed and clear (though some other buffered lanes on my trip, like Washington in the West Loop, were still pretty bad, which doesn't make sense).

The new protected lanes are great and get people out more for sure, but the City is definitely having issues keeping them cleared in winter, and there are stretches where I have felt less safe riding in the winter than I did in the past.  You end up forced back into the lane, and cars now think cyclists shouldn't be there in those stretches since the (now impassable) protected lane is right next to where you're riding.