I had people stop and stand in front of me at a light and didn't move when it turned green for me and they looked at me like I was the A-hole.

There are times I wish air horns were light and
practical for bicycle use...

I think that would be one of them. The air horn is a last resort as I ring the small bell first in order to be polite.

And yes, one should always be as polite as the situation allows, even when dealing with the clueless ones.

This is from Monday in the Dearborn Bike Lane. Note the "Valet Loading" sign to the left. The driver is the guy in the beige suit to the left. He told me he was "waiting on the valet." The more I've thought about it, I think he sincerely had no idea what he was doing was wrong. 100% example of "ignorance of the law is no excuse" but that sign is a serious problem. I've reached out to the restaurant. 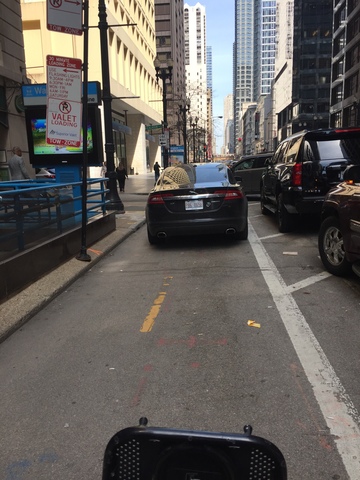 This morning, the mouth of the Washington "protected" lane was completely blocked by a mail truck and a construction truck, which is the case at least half the time that I see it.  Left with no choice, I continued straight in the traffic lane (actually a bus only lane at this point), the only safe and legal maneuver available to me.  After about half a block, the minivan next to me signals and starts gradually changing into my lane.  Unlikely that he didn't see me, as we'd been riding together for a couple of blocks at this point and I'm wearing a neon yellow jersey.

Anyway, I start defensively slowing down and yelling my usual "occupied" to get his attention.  It's 70 degrees outside, so almost everybody has their windows rolled down.  He completely ignored me and continued to drift dangerously into my lane, so that he would have killed me if I didn't slow to a near stop.  At the same time, a nearby pedestrian who sees the whole thing decides to chime in with his opinion.  Did he say, "Holy shit, that guy nearly killed you" or "Are you okay?"  Nah, he says, and I quote, "There is a bike lane right there."

By now, I'm practically stopped, so I have plenty of time to respond, "Actually, the bike lane is blocked if you'd bother to look."  In retrospect, I'm surprised I didn't swear at him for his stereotypical insanely anti-bike opinion that it's actually okay for a driver to perform a potentially deadly and illegal lane change into a cyclist who was riding in a perfectly legal and safe manner.

No surprise here on Dearborn: 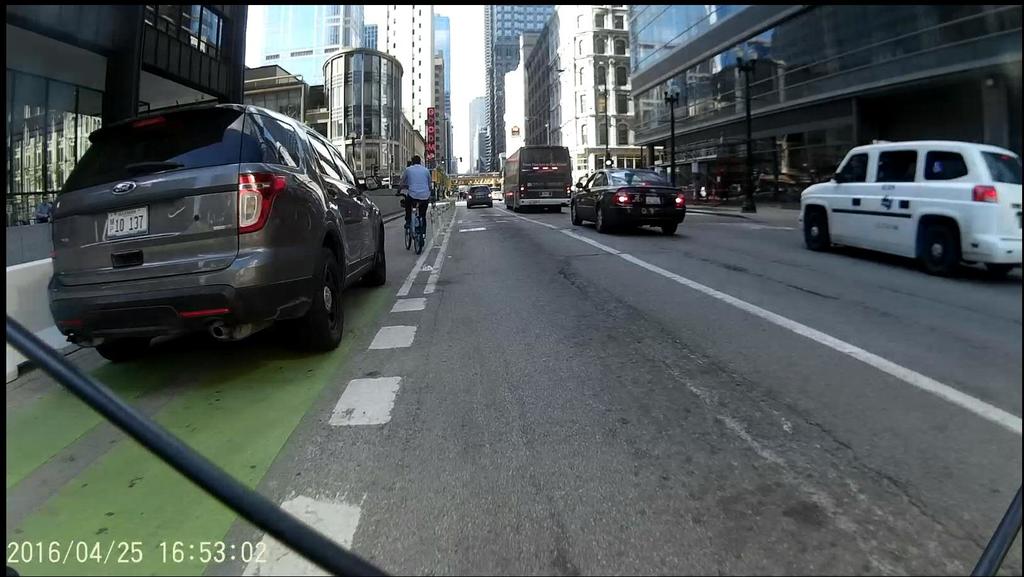 A fun one on Clybourn: I was slightly worried this goose was gonna chase us. It's getting worse.  I only rode about a mile and a half in bike lanes this morning, because I'm pretty sick of them at this point. In that short span, there were at least 10 buses, 3 SUVs, a minivan, and a mail truck parked in them.  Not to mention a delivery truck parked on an angle across a busy Loop sidewalk.  (Also, a very slow skateboarder and 3 women sitting in the Washington lane.)

They do this because they're confident that the city will not ticket them--or even tell them to move.

Similar problem recently on Roosevelt, just west of Wood, in front of the Chicago Lighthouse (for the blind) - numerous cars have been parking in the bike lane for the entire day. Parking is prohibited on Roosevelt in that area (let alone not allowed in the bike lane); police drive by all the time, but do nothing.

Perfectly good set of 2 1/2 spots. This woman had to park in the bike lane. 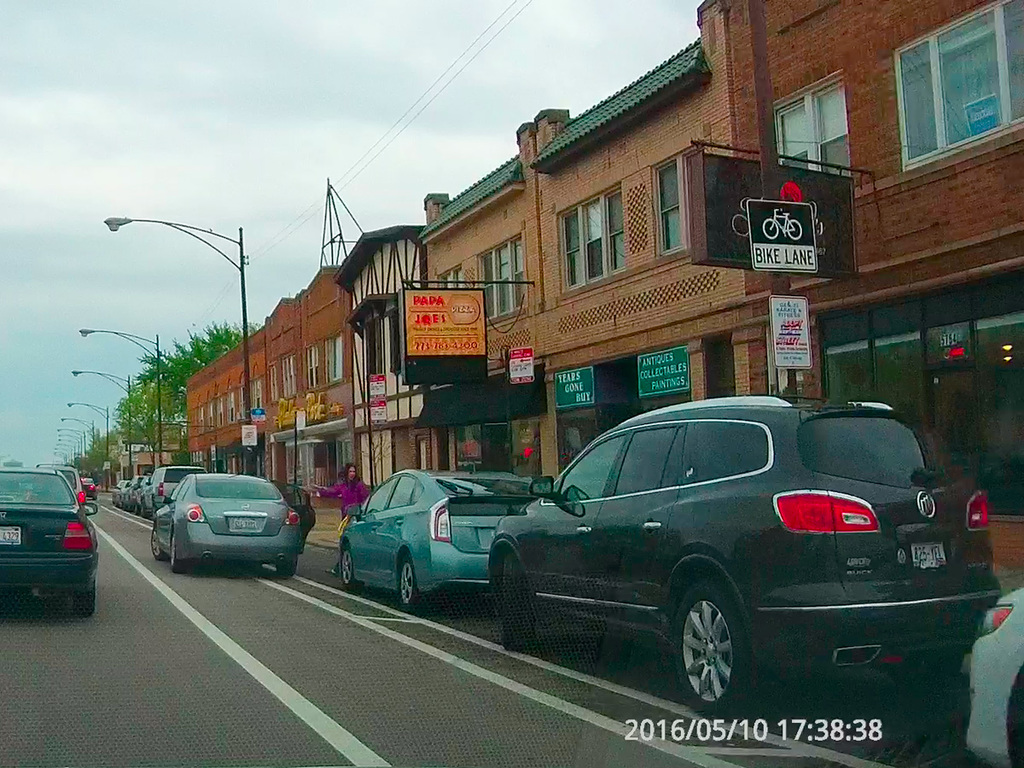 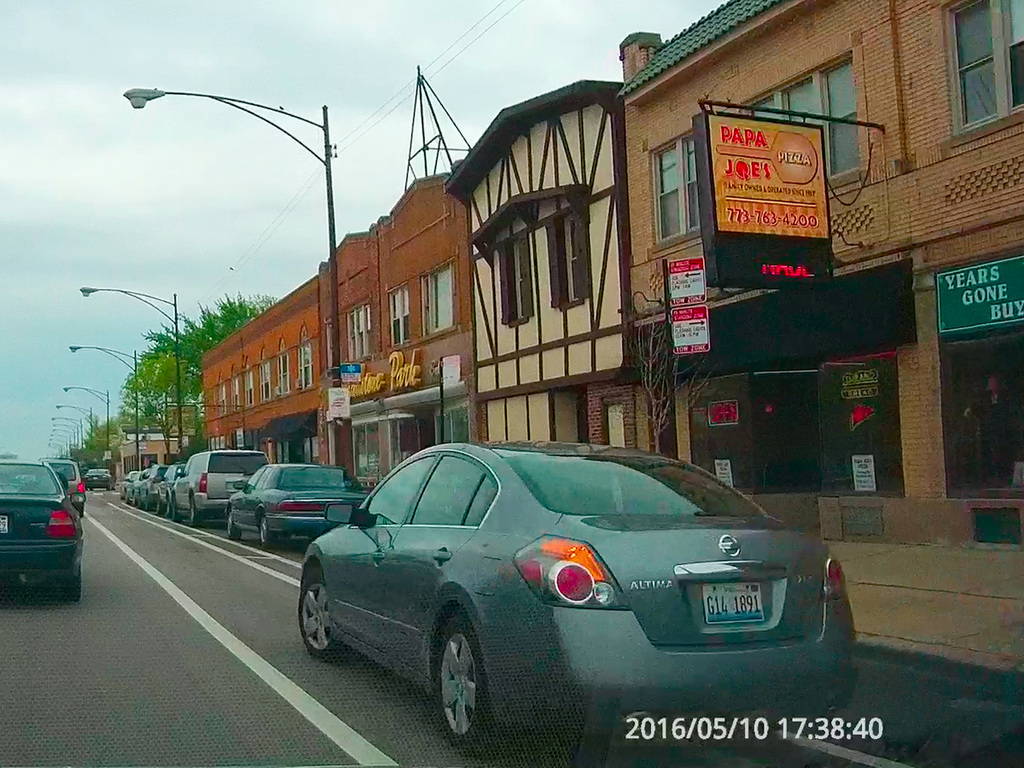 I always wonder what it is like to be so special! :-)

I didn't get a pic of this but has anyone else encountered a horse and carriage in the Clybourn bike lane?