Newschatter: Chicago local news sources are revealing that an unnamed Alderman will recommend a proposal to license bicycles at tomorrow's budget address meeting.

At this point I would be more than willing to pay a small fee (maybe relative to weight/size of vehicle) just to end the stupid "'bikers' don't pay their share for the roads" red herring.

In reality this has no chance and just sounds like trolling.

I can see it now, the actual cost of wear and tear estimated at $1 per bicycle, but the City will need an additional $49 to cover the cost of processing. 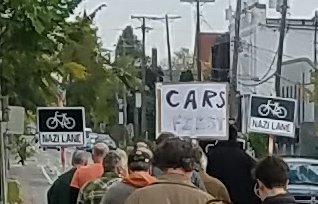 Sounds like the Alderman is part of this group :P

Yeah and it would cost 1.5 million to administer on a good day and it will never be a good day. Its unenforceable.

What if the license fee would be used to pay for parking enforcement to keep cars out of bike lanes?  $5 mio would pay a staff of 25 people to work on this for a year...and they would raise enough revenue from parking tickets to keep the enforcement operation going on in perpetuity!

Would the money collected actually go towards bike-related infrastructure and services, or into the general revenue pot. I'm guessing the general pot. We'd see no direct benefit from the fee, other than a minor temporary halt to increases in other taxes, e.g. property taxes.

As others have noted, it would be basically unenforceable. Unlike motor vehicles, bikes are not required to be licensed by the state, so there is no license plate to identify the owner. A ticket writer finds a bike without a sticker, and writes a ticket. OK, where do they send it? The only time a ticket could be written would be if the officer was in the process of writing another ticket to the actual rider. When was the last time you saw a cyclist receiving a ticket? Yeah, didn't think so.

Joking aside, I see no value in the idea other than a quick injection of revenue. However, the compliance rate would be miniscule. Anybody who thinks more than 5% of cyclists would pay the fee is smoking crack. A tax is only useful when a) the revenue generated is far greater than the cost of administering the tax, and b) the compliance rate is high (due to the fact that getting caught is highly probably, and the fine is penal).

If your registered car gets stolen, some -albeit miniscule- effort is spent by law enforcement to recover it. Would the same effort be put towards recovery of a stolen registered bike?

Quick answer: no hell no.

And when the CPD does recover a bike, it usually goes into the annual auction, where i have seen registered and tagged bikes on the block whose registered owners i guarantee were never contacted on recovery.

So, what's the benefit of a bike license? Any revenue collected will likely go into the general (slush) fund, and not one cent towards anything having to do with making cycling better or safer in the city. And as others have pointed out, the cost of implementing and enforcing the ordinance is prohibitive.

Too bad the esteemed alderman doesn't read the comments on Chainlink.

Clearly the proposal makes no sense from a financial perspective.  But non-compliance would be another way to blame the victim when a cyclist is run over.  "He was not wearing a helmet, AND his bicycle was not licensed..."

Permalink Reply by Filka Bean on October 18, 2017 at 11:31pm
Not so fast- did everybody forget the wave of sidewalk-riding and other tickets on the south and west sides? This would fit into that model of punitive nickel-and-diming really nicely.