Apologies if this has been discussed elsewhere, but while riding on Pratt last week, I came across what looked to be a new trail that runs NE-SW between McCormick and Crawford. It doesn't show up on Google Maps yet, but I've circled the area in red below. The southern end is at Devon, but I don't know how far north of Pratt it extends.

Does anybody know if there are plans to extend it south of Devon (the area circled in yellow)? It could meet up with the Skokie Valley Trail south of Bryn Mawr and extend to the new extension of the North Branch Trail.

It didn't look like there was any work being started there, but is it being planned? 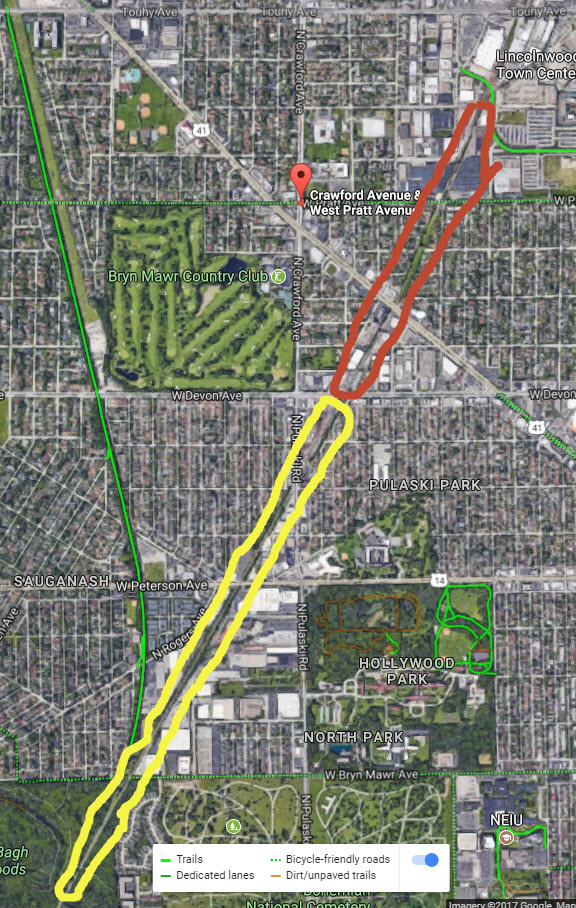 Permalink Reply by Duppie on July 10, 2017 at 5:38pm
That's the Weber spur trail.
One day it will connect to Elston in Chicago, but that is likely a number of years away.

It is part of the Weber Spur.  Union Pacific actually leased the land to Lincolnwood to build this part of the trail.  It goes north of Main Street to Touhy.

If you go south it will end at Devon, and right across the street is a the continuation of the Weber Spur southbound, rough gravel and hardly suitable for walking.

Several month ago I rode up this new trail while it was still under construction.  Pictures at

Union Pacific seems to have it's shorts in a bunch about safety, and this is a big issue about opening up the land.  The North Branch trail crosses over the Weber Spur but there are now large walled of Jersey Barriers locking out bicycles from entering this section of the Weber Spur.  It's only 2000-feet north, to Bryn Mawr, to join up with the Sauganash Trail which continue north, thourgh Lincolnwood, all the way to Dempster.

The wall along the North Branch Trail isolating it from the Weber Spur: 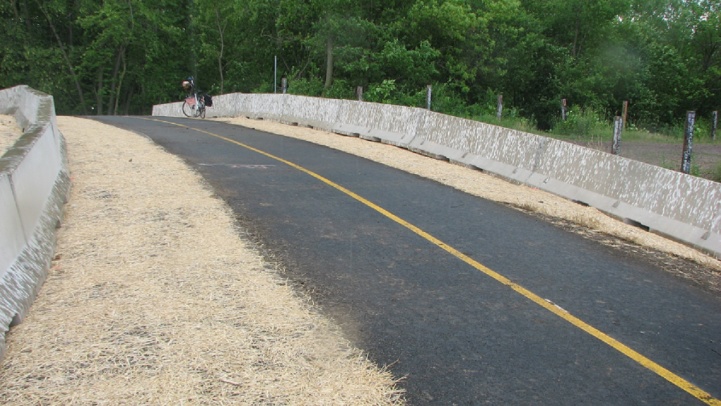 Eventually, the weber Spur could extend south and end at Sunnside, but that is a long way off.

I rode this again. Its pretty short. It goes from Devon on the south end up to Touhy on the north end.

Seems useful mainly for pedestrians in the area.

One benefit: the north end is right across the street from the Jollibee's on Touhy. Tried it for the first time tonight. Pretty good fast food option. Get the Palabok.

What Bob said.  Both of us have been working in the 39th to make this happen.

One super neat thing nearby is Springfield Park in Lincolnwood.  It's just a tiny bit east of the Devon terminus.  Smallish skatepark, great playgrounds, sand to play in.  Good if you have children or like a park.

For some reason the park isn't listed on Google, so you won't see it in the map.