I rode today. Did you?

Nice first ride in the COLD.

Yes - it was pretty great. I love it when the motor vehicle tracks/ruts are still soft enough to fight a bit. My usual (as of this week) 35 min commute took about an hour and a quarter. Mostly fun though. One guy in car offered me a ride, "hey bro, you want a ride or something?" which was nice. I thanked him and told him I was having fun. I got a "You're hardcore!" from a ped on Archer - which I avoided mostly. Prolly rode a mile of sidewalks to avoid traffic squeezes like on State between 15th and 18th.

When I got home I didn't feel like stopping so I took a lap around the park: 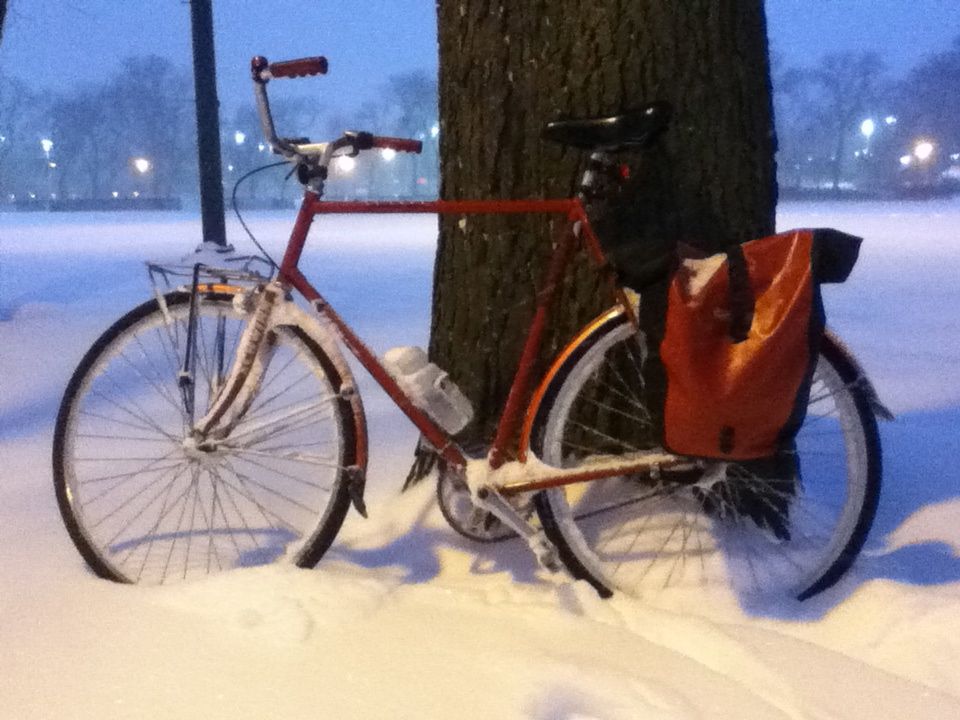 The frankentown passed its first deep snow test with flying colors. The Panasonic Ribmos (700 x 32) - more or less slick - probably somewhere between 75 - 85 psi,  handled GREAT in the snow. A bit slidey here and there where the ruts were more solid - but they were a total joy in the fresh snow. I never got out of first gear - which, may be a tiny bit tall for the slippery stuff.

I was expecting more trouble from the fenders, which don't have much clearance in a few spots, but they performed quite well.

I took washington west from the loop.  Crossing Ogden would have been horribly frustrating in a car.  All the cars on Ogden would creep through the intersection then be stuck there blocking the intersection when the light changed.  I walk to the front of the line, zigged through the cars when I had the green light, and then had washington all to myself.  It was awesome!

other than that, slow going (my commute time doubled), half fun, half terrifying, and 100% awesome if we could just get rid of all those cars!

I think my return commute from the Loop to Wicker Park only took about 5 minutes longer than usual. Keep a light grip on the handlebars, a light touch on the pedals, and steer in the direction of the skid. Yeeeee-Hawwwww!

I haven't ridden in conditions like that since, well, last winter. I already had the studded tires on so I wouldn't get surprised by ice patches earlier this week, and the studs don't do anything for me in mucky snow, but the tread helps and the Hetres would have been useless. A bit of lack of confidence due to being out of practice, but with the choice being between getting in the conga line (nice phrase) and being stuck in traffic or fighting the muck in the curb lane, my 25-minute commute was an hour. Once I got north of Diversey on Milwaukee, though, it was clear sailing.

Anyone know who this is? From the online Chicago Tribune: 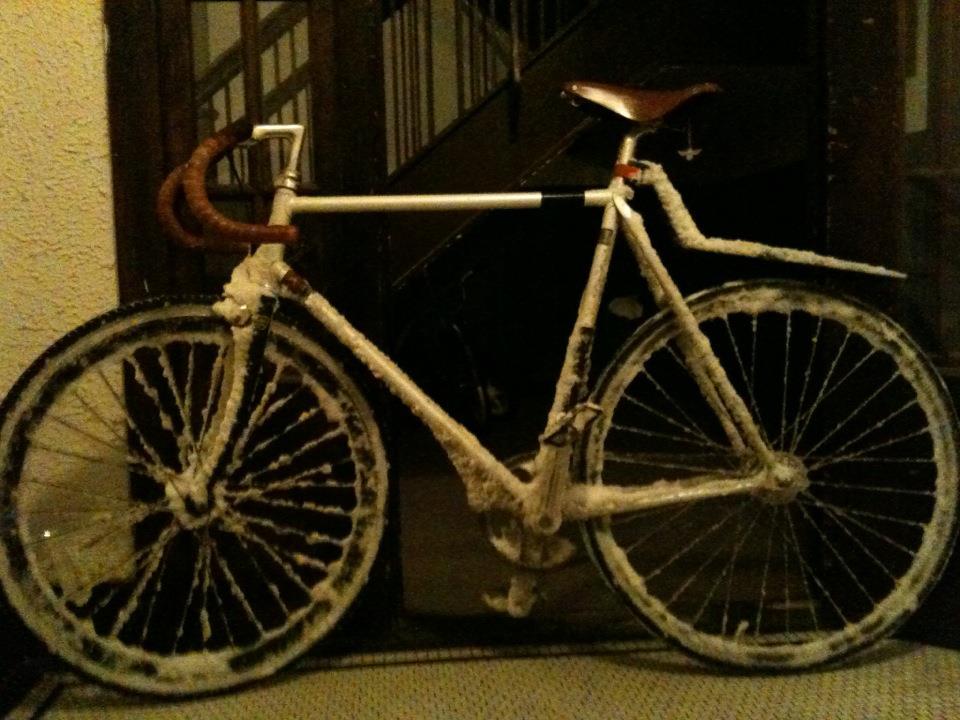 The plan when I left the house was to bike from 6000 North to the Brownline @ Lincoln, Lawrence and Western and lock up there.  But I was having such nice ride, I blew off the station.  Man, my mind was really working me over.  The farther South I got, the worse the thoughts of the P.M. commute ate at me.

So I locked up @ Fullerton.  Redline, Fullerton to work and back.  Took the bike on the Brownline, from Fullerton to Western.  The ride from the Western station home was a sloppy, slippery, soupy mess.

I'M GRATEFUL WE CAN BRING BIKES ON TRAINS IN THIS TOWN. Made it home with out too much of a struggle. But I'm tired.

I rode a few blocks after work for practice on my mountain bike. It was definitely fun but hard work on the unplowed streets. One pedestrian said "I have guts" for riding. My wife (who hates SNOW) said I looked like the village idiot for being out there, but it was FUN, and a confidence builder for my commute.

I'll say this much.

This was my first ride home from work in a LONG time that i wasn't passed by a speedier cyclist.

In Uptown the main streets are plowed and salted. Side streeets are still iffy with slush. The lakefront main path is plowed and salted, but there are not-so-good areas with slush. I tried the side paths around Montrose and followed plowed paths that ended in drifts. Gloomy day, but it is still gorgeous to see trees capped in the white stuff. 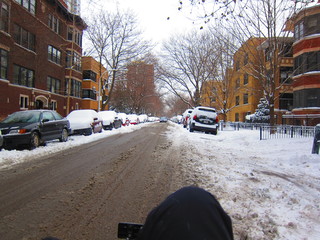 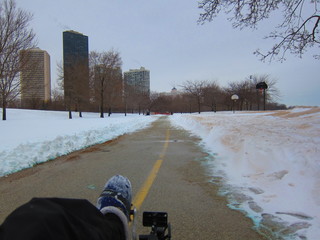 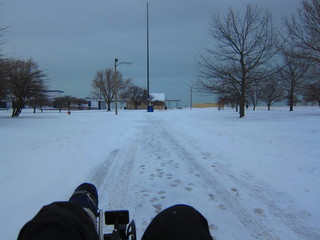 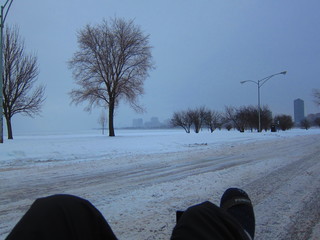 And the ever-curious blue snow. Avatars? I rode today on Wells and Lasalle just to test ride the Civia Halsted Jon Lind has at his shop for the next couple of weeks. It was super fun in the slush but without fenders, the insides of my pant legs were soaked to the bone.