Cyclists assaulted by driver at Lincoln & Leavitt this morning

My friend was riding down Lawrence this morning on his way to work, stopped in the bike lane.  Behind him was a green Mercedes, also in the bike lane.  Another cyclist was beside the Mercedes, and the car was edging him out, trying to get ahead of other cars so it could be the first in line when the light changed. The car pushed the first cyclist into the curb, and the bicyclist responded by yelling at the driver.  My friend turned to see what was going on, and as the car kept pushing the second cyclist, yelled to draw his attention to the fact that the car was about to run down the cyclist.  The driver kept going, so the second cyclist thumped on the car to get the driver’s attention. The driver gunned the car through the red light, speeding down the street about a hundred yards before jumping out in front of an auto shop at Lawrence and Leavitt.  The driver then ran toward the second cyclist and punched him in the head and ran back to his car to drive away.  The second cyclist went to the car while my friend scrambled to get his phone out to get a picture of the car’s plates.  The second cyclist grabbed the driver’s side window to prevent him from leaving, and the window shattered as he tried to drive off.  The Mercedes once again stopped and the man jumped out of the car while the second cyclist dropped his bike on the curb.  The driver attacked the man, ripping off his helmet and punching him.  My friend grabbed the driver to stop the beatdown and also got punched. This happened in front of the Lincoln Square Service auto shop.

The best part - workers at the auto shop (you can see them briefly in the movie) were standing around watching like it was their morning entertainment and wouldn’t help until my friend screamed at them to call 911. After reviewing my friend’s cell phone vid, the police put out an assault warrant for the driver (they said they know who he is).

This is an example of where civil law and criminal law overlap. The police and the state's attorney's office can push charges for traffic violations (driving in bike line, harassing bicyclist, 3 foot rule, etc.). They also could press criminal charges for assault and battery. In addition, the victims can pursue a civil action for the assault that caused personal injuries as well as punitive damages. "Punitive" shares the same root as punishment and this is a special claim made to serve as a deterrent from repeating the same action as well as retribution for the harm caused.

Violent behavior like this is inexcusable and is flat out criminal.

Yeah, technically Illinois has civil penalties to cover this action, but LA's anti-harassment statute (linked to earlier in this thread) provides for fee shifting and statutory civil damages so that a cyclist and her attorney can recover fees against drivers who harass cyclists.  This would make it a lot easier for cyclists to find attorneys willing to sue a harassing driver when no injury resulted.  Right now it's difficult even for guys like you or me to justify taking a run-of-the-mill harassment case with no injury.  Give me a statute that provides for my fee and I'll pick up the ball where CPD falls short.

Sure, guys like you and I will take cases because people come from our client base, but how many times have you fielded a call from a cyclist who was harassed with no injury?  It happens, and there's nothing we can really do about it as the law currently stands because costs will eat up a recovery (not even thinking about the possibility of collecting a fee) assuming you can effectuate a recovery with no injury.  Statutory civil damages and fee shifting...  Now that gives me something to work with.

I get that we sometimes take cases for reasons other than fees (I do it all the time), but it would make it easier for people to hold harassers responsible if CPD refuses to do anything.  ...and I've seen more than one instance in which CPD refused to charge a harasser.

One time a guy threw a beer bottle at me.  I went to the police station to file a report, and they were almost making excuses for the guy.  "Are you sure he didn't just throw the bottle out the window?"  I'm like, "Yes, I'm sure, but you can go give him a ticket for littering if you think that's more likely to stick."  They declined to give the driver an assault charge or a littering ticket.  I had no injury.  What recourse do I have?  Sue the guy for civil damages?  Good luck with that, but if we had LA's statute?

Funny thing is, we have an anti harassment statute in Illinois, but it only provides for criminal fines.  No provision for civil damages.  I think I see a blog post coming.  BikeLaw.

One of the trolls on DNAinfo repeatedly claimed that the cyclist's thumping on the side of the car (while being run off the road) is "also assault" (and that the cyclist therefore "contributed to the escalation").

I'm sure we all agree that the "contribution" idea is utter BS, but what's with that assault definition: is that true at all?

Unfortunately it may legally be viewed as an escalation unless it can be shown as an act of self defense or as simply a message to the driver that "hey, you are about to injure me". If the intent is to punish by inflicting damage to the car or a message that the "thumping cyclist" will respond to being offended with physical violence that would probably be considered an escalation. An escalation may change the outcome of how these things can play out in a courtroom and would be decided by a judge or a jury but first the police need to make arrests. If witnesses on the scene describe a biker as intentionally striking the vehicle with his hand the Police can arrest the cyclist; however, an arrest is not a conviction and that would ultimately have to be decided in court.

It would probably be best practice to move out of the way of the crazy people (if you can) even though you are in the right.

Permalink Reply by Tom A.K. on July 13, 2015 at 10:53pm
Fergie, I would like to make a comment to your friend that shot this video, and thank him for putting down the camera and coming to the aid of the other cyclist. Who knows what worse could have happened if he didn't intercede. I know he's getting thrashed for the video out there (comments elsewhere) for providing what he did.

My thanks to Tom and everyone else for your support, I appreciate it.

Just wanted to sign on and post a few pics of the driver.  He seems the angry sort...

Thanks for posting the pics LG. I ride by there all the time.

I'm so sorry this happened to you. Any news on whether the police caught the driver? 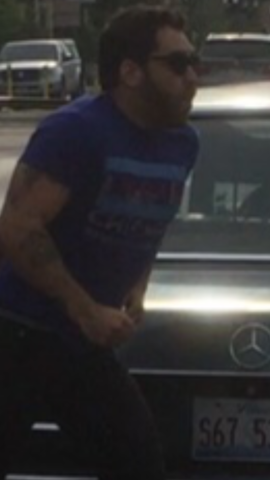 This guy sure looks like an angry nut job. Great evidence for a case. Glad there were no serious injuries. I bought a gopro for the same reason a month ago, and the one night I didn't have it on some A-hole purposely drove within inches of me as I rode on the left side of the bike lane.