A pilot program seems likely to attract dozens of eager volunteers.  It would raise awareness about the issue, and if it were successful, it would help keep Rage Cagers out of the bike lanes and in the streets, where they belong.

When does this pilot program roll out? 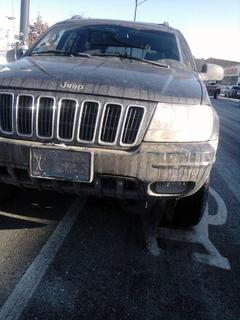 I like the orange ticket idea :) .  I wish we could guarantee that all cab drivers can read...English.

Btw, for the rest of us:

Oh mai.  Fake tickets is genius.  Official-looking Orange envelope, but inside it says "This isn't a ticket, but it could be.  Please don't park in the BIKE ROAD".

Maybe they could do this robotically....If a car is stopped in a certain place for more than 3 minutes a picture is taken and they get a ticket sent to them.

Another idea is make up fake tickets (obviously fake, but with a real orange envelope) and we cyclists stick them on the front of their windows as a warning....

Hmmm, lets say for example 2 or more Chainlinkers took pics of the offender and sent them along to this site tagged with the proper information so that they end up in the same folder. Then let's say we had some sort of automated complaint system that forwarded this evidence to the appropriate municipal service. I guess what I'm suggesting is that we create something akin to the automated traffic light ticketing system until the city steps up to do it for us. Maybe the Chainlink could get a cut of the revenue as well.

Let's say the Chainlink put up some ads along the Dearborn bike lane making this known. Maybe spend some of that donation money on advertising.

In an age of ubiquitous camera phones, crowdsourcing reporting of violations to the people affected by it - cyclists - makes sense.  Subject their submissions to the same standards as the red light cameras: 3 pictures, one of the plate.

Viola - drivers learn super-fast to stay out of the bike lane, and the city gets FREE revenue.

While i understand the need to keep the bike lane clear i am NOT a fan of this form of combating the issue. I have been an outspoken critic of red light and speed cameras automating the job of ticket writing. This really is no better. not a fan of rating your neighbours out, or having cameras everywhere. 1984, THX1138, F 451, Blade Runner all of these stories paint a drab controlled dystopian society whet we are all watched all the time with both the govt and neighbours "doing the right thing".

I give em a look or the finger but will not suppprt this citizen justice brigade. Maybe its a slight over reaction to where you all are going.

Would you support a cager stopped at an intersection with a camera phone sending video via email to the city for facial recognition automated tickets for bikes running a stop sign?

The "Active Citizens Ticket Brigade" idea sounds like a bunch of neighborhood busy bodies that think they should be able to dictate the lives of everyone around them. I would actively oppose such legislation.

And yes, never going to survive legal challenge. Oh, and how long till one of the busy bodies gets shot for pissing someone off?

Back to the "fake" ticket idea.  That would be cool.

"I loiter in bike lanes..." and slapping them on the back of offending vehicles.  Wonder how long it would take before the driver noticed it was there?

Reminds me too much of: http://www.youtube.com/watch?v=rwEvysDpNm0 Bike Lane? I thought this was a tank lane.