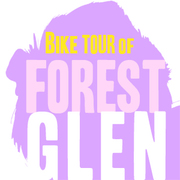 Forest Glen is community area #12 and sits 10 miles northwest of downtown Chicago. Bordering the Northern border suburbs of Niles, Skokie and Lincolnwood, Forest Glen was a suburb itself until it was annexed by the city in 1889. The surrounding forest preserves, golf courses, parks, cemeteries, bike and hiking trails and beautiful homes of varying vintage and styles still preserves a suburban-community look and feel on the edge of the city.  Our tour takes on a circuitous route of the side streets, park district paths and main arteries of a northwest community that includes the neighborhoods of Edgebrook, Old Edgebrook, Sauganash, Wildwood and Forest Glen, the neighborhood within the same named Community Area. We’ll get a chance to take in significant, but hidden architectural gems including works by Meyer and Cook, Clarence Hatzfeld and C. W. Lampe and Co. In all, the course is just over 17 miles and features stretches of peaceful bike trails through city parks and forest preserves.

This is running of the Tour of Forest Glen is being done in association with Good City as part of the Indian Boundary Bike Tours series, marking the 200th anniversary of the signing of the Treaty of St. Louis of 1816.

RSVP for Tour of Forest Glen 2016 to add comments!