Who cares for the LFT???

As a daily bike commuter on the lakefront path on and off for years, I've often felt insulted by how long serious life-threatening surface condition problems are allowed to persist.  It feels like despite tens of thousands of daily users, we're just those little cyclist people.  Meanwhile just a fence-width away on lakeshore drive such dangers would never be left to fester so.

This year in particular though the problems are so egregious and dangerous, some now months old, I felt something had to be said.

I've tried the 311 app for several problems such as a specific huge pothole, and a boulder on the path (too large for one person to move, a construction crew left it there), and gotten "the problem has been resolved" messages back a few days later, with nothing actually done.  The boulder one I even resubmitted, and got the same reply again, though it's still there.

I figured next step is contact the appropriate agency directly, but not sure who that is.

Can perhaps an Active Trans rep followup and pester the city on behalf of this lifetime members?

This streetlight, downed by a car, was left completely across and blocking all lanes the entire first day.  This picture is four days later, rotated but still blocking some.  Why hasn't it been cleared yet?!?  When will it be?? 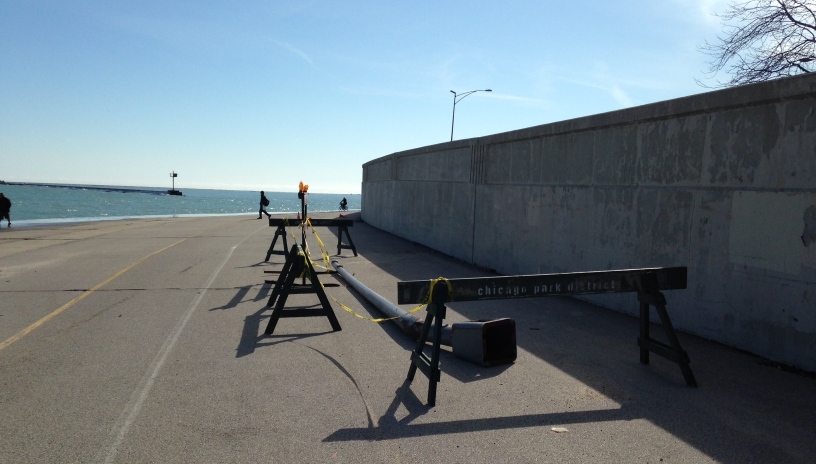 I have been wondering that too as I go by it every day. Does anybody know if its a result of that recent accident?  Seems like it is in the exact place , around 500 North. 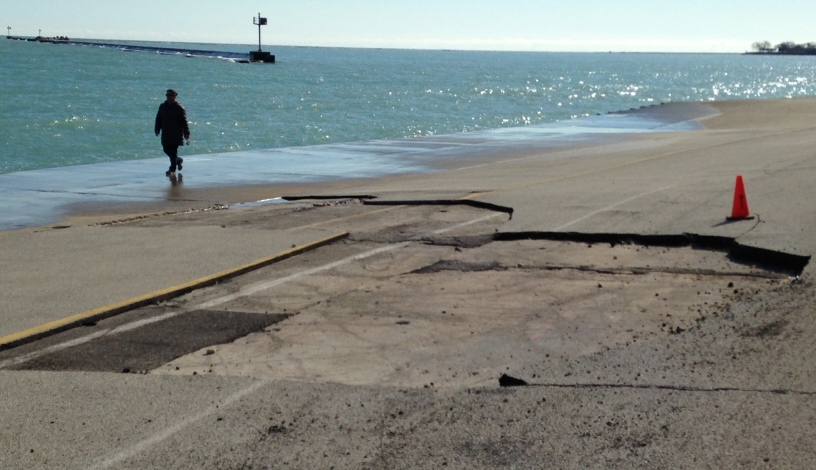 This deathtrap south of the Oak turn has surely hurt some cyclists, but has been left this way FOR MONTHS following one of our late winter storms.  A few cones is not adequate remediation. 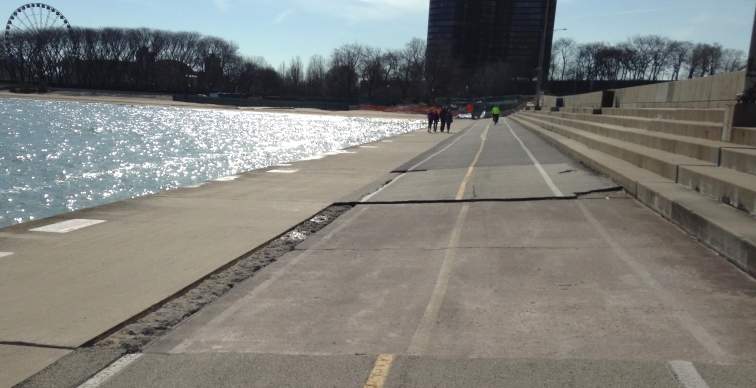 This chunk of pavement north of Navy Pier has been missing for months.  At least they cleaned up the massive pieces of it that were randomly left strewn during the first month.  Seriously, we're not Detroit.

You are slightly exaggerating. It has been there

I picked my way through there a year or so ago when a huge storm lifted all those slabs of asphalt (up north around the bends as well). The city had a construction company out measuring the area to make an estimate just a day or two after the storm. The region in your picture is part of the approach to the flyover. If I had to guess, I'd guess is they are going to redo the entire section as part of that project.

I ride the northern part of LFT (North Ave to the Ardmore terminus) pretty much year round. I think the Park District does an excellent job maintaining the trail on a day-to-day basis. Structural repairs take longer. I doubt the Park District can do this sort of work themselves, and probably has to put all such jobs out for competitive bids incurring all the delays of modern bureaucracy. Finally, there is the small matter of the boneheaded politicians in Springfield, who make the US Congress look like a marvel of efficiency. If they haven't sent a dime to the state's universities in the past nine months, can you imagine how much they've sent the cities for infrastructure repair?

The asphalt issues tend to get fixed in late spring.  My understanding is that the ground needs to be at a certain temperature or above before the asphalt will stick and set properly.  Plus having a winter storm come through and tear up the new asphalt a few days after it's been put down would really suck.

Asphalt plants close over the winter since asphalt cant be applied at low temperatures.

I'm worried it's the same team managing the site that manages 311.

I am looking at the resources people listed for blocked bike lanes on this thread: http://www.thechainlink.org/forum/topics/what-s-this-doing-in-the-b...

Thanx S, about the construction details.  I've realized that before, and it's somewhat reassuring.  But one must question, what are they building with that simply peels off in a storm?  And why doesn't the same happen everywhere on the path?  Or on lake shore drive?  I feel second classed.  If it requires special treatment to endure where it is, then it should have it.

Remembering Halloween 2014, it's been under two years since big chunks were destroyed. Like it's made of papier mache. I call shenanigans on the contractors.

Looks like it needs to be ground down, so the asphalt can lock into the small holes.