Does the city (and/or neighborhoods) have a public posting board of some kind for bike project ideas?

South Branch Chicago River as well has no bike- or pedi-only bridges. Only dedicated crossing is at mouth of the Chicago, new lane opened up for this? Otherwise, it's been essentially "sidewalk" across the river here.

Thanks for the message clp!

"Gee David, you're an optimistic guy!"

"I agree, all those projects would be 'nice' for a few cyclists."

It would be nice for a few cyclists to start with. Then add in the millions (in Chicago, at least) of non-cyclists who would become cyclists. It isn't simply for those few brave souls who risk their lives in car-traffic. This is about reaching a huge share of the population. Think 90-99%. Here is a story. At the beginning of car culture, where there was 5% of households with cars, car (and oil) companies had a proposition: Let's get cars into the hands of 90% of households. With that goal in mind, they worked many years taking over and tearing up public transit systems, pushing dirty and oil-friendly bus transit, tearing apart cities to install massive highways at the expense of the taxpayer. It is really funny you mention budget concerns. Let us remember that the average US household pays $10k on ownership of a car. That is great that for many years you have paid $0 per year on a car. But you are still in the US, and you fall into average of $10k/year on a car, like it or not. Not to mention the buku bucks coming out of your wallet every year to support highway and road infrastructure - all of which is mainly used by cars and not bikes. Why not put all of that excess money into bike lanes? Why? So that is the story. Car ownership per household quickly reached 90% levels in the 50s. Unfortunately, in this country there has not been a backlash against car culture. In some countries, such as Nordic ones, this backlash went through in the 70s, and they've managed to at least have a much lower rate of car ownership - and more biking, as you state. Per person, in the US car ownership is 83%. Why? Is it really that great to have a 3,000 lbs machine to make doodie-trips to buy groceries, slum it to the fitness center, wasted hours hands clenched stressed like someone's behind you with a knife?

"But in 40 years of biking around Chicago (haven't owned a car), I can't think of any time I might have used those proposed bike infrastructure ideas....the existing streets have always seemed adequate."

Great for you. Have you taken your kids with you: 1) most of the time; 2) some of the time; 3) never? How about your parents?

"And when you consider how much unnecessary time and money was spent on the over-built, over-engineered Navy Pier Flyover....as a Chicago taxpayer, I say no, no, no!"

Again, see excess waste spent on car infrastructure. Let us also consider war culture, e.g., 50% of free money going to military expenses! What a waste! Add to this many wars are over oil. Oil!

"If you've ever visited Holland, France, the Nordic countries...or just about any other enlightened country, you'll notice very simple bike infrastructure: just a wider shoulder or an expropriated car lane, converted to bike lanes with a little paint or curbing.  And with gas at $9 or $10 a gallon, those bike lanes are USED...fancy bridges and flyovers not needed!"

Sounds like you are arguing my point. Actually, I referenced the flyover simply as one small example of a "safe" crossing. Most of my original comment revolves around "very simple bike infrastructure", as you put it. Actually, a "few expropriated lanes" pretty much sums up the argument. At least to begin with. Down the line, let's image 5% car ownership. Hey, why not!

"Maybe the world will someday 'transition to sustainable transit.'"

Some people might beg to differ on the time scale. There is a growing number of people, like it or not, who see climate change as the foremost political issue facing the world! From this corner come calls of "50% by 2025", "100% by 2050", and so forth. If this is to be taken seriously (transit currently accounts for about 1/3 of CO2), then, for whatever it's worth, moving to 5% car ownership, away from air travel, to more local not global is undoubtedly in the cards. Governor (Pritzker) and former mayor (Emmanuel) both at least pay lip service to near-term 100% renewable energy.

For what it is worth, I think renewable energy is only a part of the solution. I think cars are way too big to be useful. They sit around doing nothing 98% of the time. EVs are only viable in the ultra-mini scale, e.g., anywhere between electric bikes to EV scooters to mini-EV two-seaters. AI for driving is a joke. It's called a "train"! Really, getting rid of oil will go a long way. I doubt whether car manufacturers will even really care to make cars when the oil $$ dries up.

Too bad for your kids. Maybe someday they'll talk about how you were one of those "ignorant" ones?

"So I don't think we need to worry about creating a place to 'post' bike projects quite yet.  Chicago, Cook Co, and Illinois have much more pressing issues to finance first...like our ballooning debt."

In any case, care to discuss in person over coffee or tea?

I think the Navy Pier flyover is great. There's nothing about it that I would describe as "over-built or over-engineered".

Here are some examples of similarly "fancy" bike infrastructure in Europe that go well beyond just adding a wider shoulder or converting a car lane to bikes. I'd love to see similar types of investments made here in Chicago. IDOT has an annual budget of $5 billion, by the way: 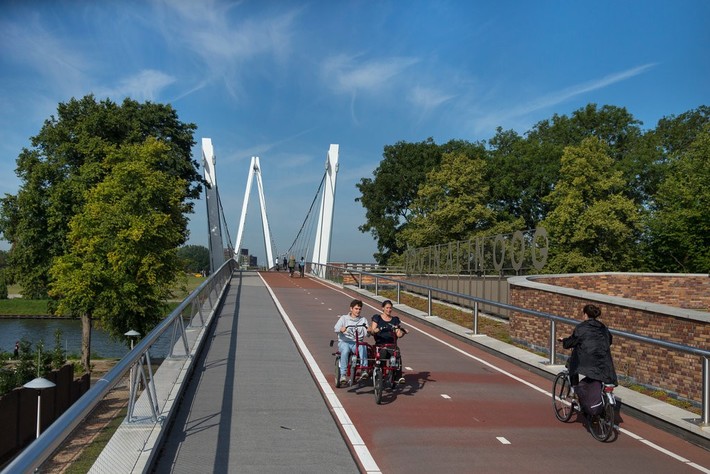 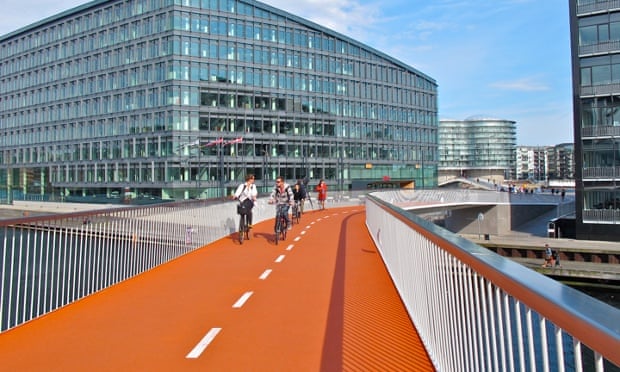 I greatly appreciate your original post as well as your thoughtful follow-up post to clp. I share your general desire for fundamental changes in our transportation norms and infrastructure. I also agree with your criticisms of the American mass-integration of the private automobile and how that has caused more destruction to American communities and public health than "TV or drugs", and that the private automobile has been and continues to be a colossal waste of public and private finances. The future we seek begins today. Momentum is building. Necessity is the mother of (re-)invention.

If you would like to begin building a coalition for a bike/ped-only bridge over some part of the Chicago River, count me in to help. I've long-dreamed of this and would love to put some energy behind it.

Hi -- Check out the City of Chicago's "Streets for Cycling 2020 Plan" at https://www.chicago.gov/content/dam/city/depts/cdot/bike/general/Ch....  Improving conditions for cycling across the whole city (not in just one part of it) has been a goal that CDOT and other agencies have been working on for decades (literally). The main issues are: balancing users of the surface transportation system, the age (and "built out" conditions) of our city, the sprawling land use patterns (often unfriendly to cycling and/or walking), availability of funds, and old-fashioned, old-school thinking (automobile-centric) in engineering and among many elected officials (i.e. alderpersons).