yeah, I probably should have muted that out before posting :)

Interestingly, the water/air-proof camera case actually cuts out all but the loudest of the audio.

A fuller transcript of the audio would have been something like: "on your left ... if I don't get run over first" then the bit you can hear (think of it as a horn honking...) and later as I caught back up "well - that didn't feel safe"  and his response "yeah, just another lovely ride home"

I've forgotten what the other guy yelled at the car in the moment.

Uber driver in the Kinzie bike lane across from 555 W. Kinzie at 6:25 pm last night. These Uber drivers have gotten really bold about parking in bike lanes to pick up fares, and Uber doesn't apepar to be doing anything about it. 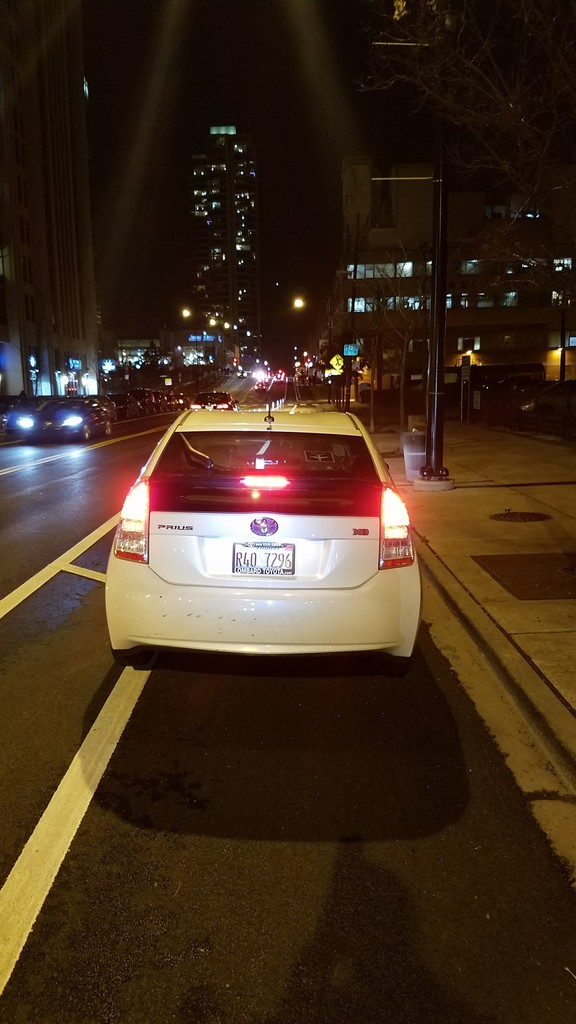 I don't use uber, but I've been told drivers can loose their ability to participate. Does anyone know of a way to report drivers and have an impact?

I've reported it thru the app, but you can report it here if you don't use Uber: https://help.uber.com/

I use "My driver drove dangerously", then fill in the details stating that you weren't in the car but provide time, car model and LP# in your report. I've reported 2 and received emails back that didn't appear to be canned responses.

Looks like they have a number for emergencies as well 800-285-9481, depending on how serious the issue is with a reckless driver.

Permalink Reply by HumanPoweredTransportation on December 1, 2016 at 11:57am

Good work! Shalini gets GOLD stars for not just posting a pic here to complain, but contacting the people who can make it stop!

Drivers park in the bike lane because it is 'convenient.' If professional drivers are finding this to be convenient, one thing that will make it much LESS so is delay. They do not like it when I park directly in front of their motor vehicle with my bicycle when THEY are ready to move.

I somewhat sympathize with the uber driver's position even though it makes for something totally unacceptable for my daily life, and more often than not when I see someone driving 'stupid' its an Uber or Lyft driver, lost, following a GPS that's not giving good directions etc., and do think that the solution will have to come from UBER itself on this. And they won't do anything until they get enough complaints that it hurts their bottom line.

The uber app (and chicago weather) encourages people to call for a ride right where they are. For the older Taxi model, there's an inherent incentive to walk to the nearest corner, you can hail a potential taxi down from either of 2 streets than just one, double the odds. The way the roads are designed, it often happens that, there is more of a flexible zone at the intersections (the corner) compared to the middles of blocks usually for a right turn lane where this can be accommodated.

For, the uber driver, they won't get credit for 'arriving' until they go to the exact spot where the user requested, not 1 block away where there's a convenient drop off spot, the App assumes that there's enough space on any road anywhere for the driver to 'pull off' and wait up to 2 minutes for the fare to arrive, and then inexperienced drivers see the 'bike lane' and use that. its worse when there are actually parking spots etc nearby that the driver could use instead.

Personally, I can't wait for self driving cars to solve this, though, the way things are going, I'm sure those will be worse somehow. In the meantime, and even with self driving cars, Uber would need to have a better GPS map of where good 'standing' zones are, and direct the fare to walk to the nearest one rather than standing still, mid-block and mid-lane.

Permalink Reply by Maurice on November 30, 2016 at 7:05pm
I've seen a growing number of Ubers swerving into the bike lane without looking, because of course they're invariably looking for their fare or at their phone.

I definitely agree - if I see an Uber or Lyft logo sticker on the back of a car I approach/pass with extra caution.

Permalink Reply by HumanPoweredTransportation on December 1, 2016 at 11:59am

Please report such dangerous driving to the POLICE and to UBER. Video/screencaps are great.

Jaded cynic that I am - I don't think the results will be worth the effort. It took me some hard convincing and lots of time  to get the police to file a report when I walked in, in person with video footage showing me stopped at a red light, then moving into the intersection after a green light, then getting T-boned from the side at 15mph. Helmet crushed/broken, still frames from the video show me up on the hood etc. (I didn't file the report at the scene because: E.R. trip.) In that instance I had license plates, contact info and video footage, and i went to the station right after I got home from the ER and ate some food. They only wrote the incident up after I cited law/procedures for such a thing only needing to be filed within 24 hours from their own website... and they still weren't going to do it until I called the other party and handed my cell phone to the officers to discuss the incident with her.

Cynic that I am, I  have a sense that based on a little incident I wrote up on here last year, that their take on something more 'subjective' as 'dangerous' driving or 'minor' like double parking in the bike would be 'no accident' = 'no report'. Its an issue, minor in today's world, but I think if the cop isn't there in-person to witness it and issue the ticket, nothing will be written up, or formally documented.

I would love to see a law on the books that lets someone with a good photo or video of a traffic violation/parking violation and a sworn affidavit for a minor misdeed be able to turn that into a 'parking ticket' similar to a red light camera, not a hit on their drivers' license points, but a fine to be paid... better yet if the person reporting it got a $10 'bounty' when that ticket is paid in order to cover part of their time and effort in filing such a thing and swearing out an affidavit. I imagine someone could walk back and forth at any of those cross walks with the neon 'yield to pedestrian' signs for a couple hours with a stationary camera mounted nearby and make some serious bank - and solve the city's impending budget crisis in the process. Win-Win?

I've previously posted about my dream job as independent contractor ticket writer who is paid only in kickbacks.  Hell, I'd quit my job today if the city offered me that.