The trail can be lonely and hard to exit from at night.

I am going to ride up and down this and wait to get mugged. Then I am going to cut their faces off with a razor and send it to their moms for not raising them right.

This is the bike that was stolen - a National Ultra Sport. 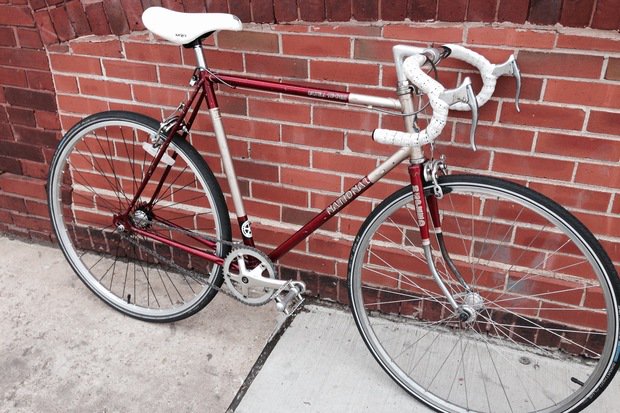 Permalink Reply by Thunder Snow on February 25, 2016 at 5:25pm
Thanks for tracking down a photo, Yasmeen. I left a post on the victim's Reddit post, suggesting posting to the Chicago Stolen Bike Registry, but as of yet he hasn't done so.

It should be safe 24 X 7 but reality says it's not.  One needs to be careful anytime riding alone, especially at night.  I'm 75 years old and ride through some pretty dicey neighborhoods during the day but wouldn't consider doing so at night -- to dark, too isolated, too vulnerable.

"Bicyclists riding on the 2.7-mile-long path were tackled and robbed by a group of attackers in three different incidents between Feb. 19 and Thursday, according to a news release from the Chicago Police Department"

Be careful out there.

That's one way to stop gentrification.

Permalink Reply by Tom A.K. on March 6, 2016 at 1:36pm
I'm guessing we may soon need to get the Guardian Angels/Chicago to patrol up on the 6O6.
Attachments:

Another DNAinfo article about the 606 - a few excerpts:

It also goes against Chicago Park District rules that say parks close down at 11 p.m., but people can cut through them for transportation purposes — as long as they don't stop.

And therein lies a rub: police say the Bloomingdale Trail (the elevated trail that's the centerpiece of The 606) is city property and not subject to that Park District clause. But the Trust For Public Land, the city's public/private partner that manages The 606, disagrees, saying that the "travel through" exemption applies.

The Chicago Police department issued a community alert warning of robberies along the trail Saturday after they said three people had been robbed along The 606 since Feb. 19.

The commander said the five parks alongside the trail are Chicago Park District parks, but the trail is not.

A spokesperson for the Trust For Public Land disagreed.

As of now, cutting through after hours is allowed "only without stopping, and only if the park provides a direct route from current location to destination. Once the park closes, people are not allowed to congregate, walk dogs, or engage in other activities," according to Alka Nayyar, a spokeswoman for the Trust For Public Land.

It doesn't seem like anyone can agree with usage of the trail. Considering the cost of the trail and the need for more safe options for cyclists, it makes sense to have the trail open 24/7 and patrolled to ensure the safety of those that use it.

I agree it should be open 24/7, and it should be patrolled better, BUT cyclists also need to exercise a little street smarts when using it late at night.  The trail is narrow with few exit points, meaning that a rather small group of three people can pretty easily block the width of the trail and attack a cyclist.

Routine patrols can help, but there's going to be stretches (especially late night but before 11 pm) where groups are going to be up there legally with little the cops can do. How can you tell who's just using it, and who intends to commit a crime, outside of the groups acting outrageously and obviously up to no good?

If you're a solo cyclist late night, I think you owe it to yourself to consider whether the trail is the safest stretch to be traveling on, and at a minimum a cyclist needs to be prepared as to how to get off quickly if their spider sense starts to tingle and a group up ahead looks like they're up to no good.

You also need to weigh those considerations against the alternatives. North Ave to the south is practically a freeway. Armitage to the north is a little better if you can avoid the drunks late at night. And it's been a hotspot for gang crime as well.

Ultimately, the end-game of blaming crime victims for not having enough "street smarts" is a hollowed-out city because everyone is too scared to venture outside.