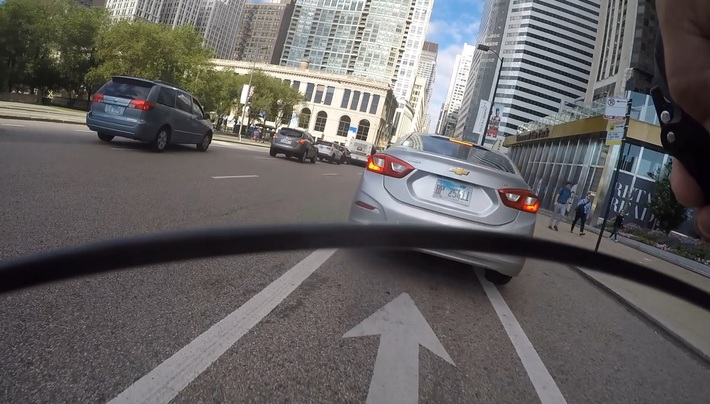 This looks like the eastbound Randolph to Michigan crossover configuration problem again.  Unfortunately it's almost the perfect design to render these results.  Curious if the two parties involved in this roadway collision both exchanged their insurance information and filed a police report?

I was the rider. As soon as I said I had everything on video, he told me to F off. So I left.

Well at least the car is registered so this can be reported to the police with some details.  It's probably another thread, but the "how to" when the other party in a collision is unruly usually means bailing out and just filing the info you have.  (This is what's so great about vehicle registration in terms of driving accountability - we have the plate #)

Yes, and it's one of those things... why waste time. I had to go to work, he had to pick up another fare and park on another bike lane. Perhaps a few small scratches on his car from my watch. But as soon as I said I had it on video, I could tell his demeanor change. He got yelled at by the biker who had been behind me in the Randolph underbelly. I hope he got no stars.

Good point Ernesto.  No stars for sure!  Somehow we need to convince the city that this spot isn't working.  I imagine there'd be a myriad of reasons offered up for why, like it would work fine if the drivers follow the rules (true) but as their flow backs up at Michigan they then have to work a cross-over maneuver for their two lane change (one being across the bike lane) to pull off the right turn ahead.  The cross-over to the left too, same situation, all while both transitions have to jockey for their turn.  Be careful!

No reason to hit the guys car.  It’s happens to all of us.  It’s part of city riding, driving and walking.  Plus turning back and puffing up just escalated the situation.  Your other video I’d take down, it doesn’t help your story if you go after Uber.  With that said the ride share drivers suck and you can’t easily report them like a taxi.  But we don’t live in the suburbs - you know the city is going to be nuts at rush hour.  When I’m driving I don’t fly down the right turn lane and hit a car just because someone is stopped and blocking it.

While he was certainly in the wrong for stopping in a bike lane (PULL TO THE DAMN CURB PEOPLE!), that was some pretty poor bike-handling.