An autonomous Uber vehicle struck and killed a woman crossing the street on her bicycle:

Not commenting as to who or what was at fault, just saying it's sad whenever a cyclist (or driver or pedestrian, for that matter), is injured or killed.

Thanks Jim.
Heard about this also this am, they said pedestrian, didn't know it involved a cyclist.
Are they saying that she was jaywalking?
What does that matter?
Stupid robot cars!

I think (but don't know for sure) the implication is that she was walking her bike across the street, but not in a crosswalk.  Also, there was a human driver in the vehicle, as I think they still have in most autonomous vehicles, even in autonomous mode.  I thought the drivers were there to take over if necessary.  So, I wonder what was going on with that, too.  If you look at the video from the scene, that is an absolutely hellacious area to be trying to cross the street, period, for everybody.  Check out the photo:

It was at night, too.  Just a confluence of bad circumstances.

This United Kingdom article covers everything. It really looks like a 'higher' speed impact from the pictures/videos. I've predicted in the past that autonomous cars would fail, looks like i might be right.

The spot where cyclist Elaine Hertzberg, 49, was hit was where a new right turn lane starts, by crossing over the bike lane.
The self-driving-uber-car was doing 38mph in a 35mph zone. Sources are also saying that Elaine, who was from Mesa, Az., was possibly homeless.
So, with the first death of the autonomous car driver period, authorities already are blaming the pedestrian/cyclist victim. 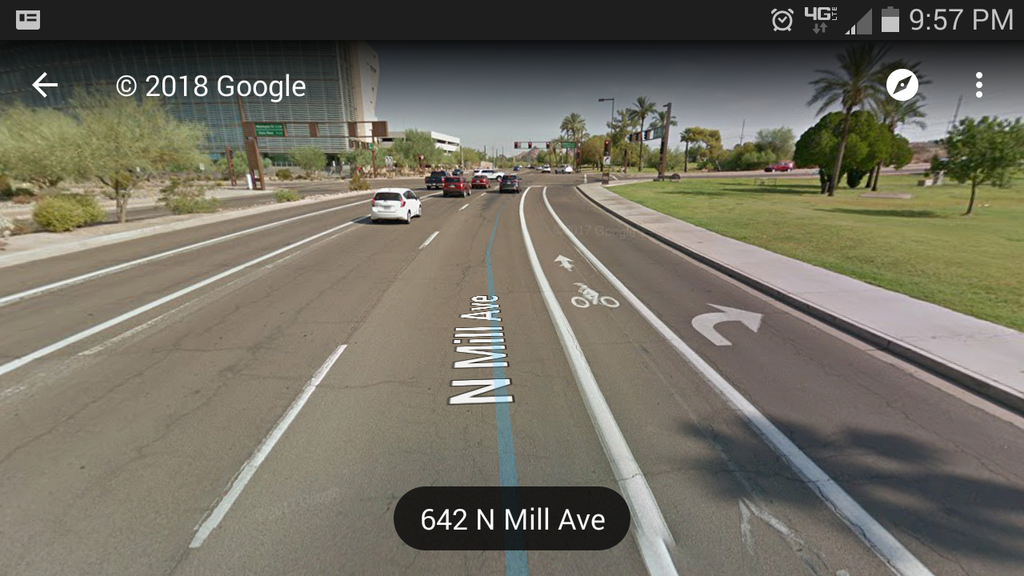 The Uber car was loaded with cameras and recording devices.  It should not be too difficult for the police and and investigators to determine, and actually see, how this occurrence happened.  I think that the truth will be forthcoming.

Tom,  where are you getting the information that the car was doing 38 mph?  I can't find that anywhere.  And how does a self driving car speed?  Is it programmed to speed?  what gives?

Take a look at the picture you posted.  Is this supposed to be safe cycling infrastructure?  I mean, good god, a three lane speedway with a painted bike lane in between two traffic lanes.  Who designs this kind of stuff?

Hey David. I was looking at a lot of sources reporting on this last night and writing to my notepad anything different/important details like I usually do. I do mostly keep note of the sources and I could try and go back and check. It may have been a U.K. media outlet source. They cover cycling stories worldwide better than U.S. sources do. The 38mph speed was (can't solidly confirm) from a Arizona police report.

Yes, Chicago also has some 'dedicated vehicle right turn lanes' that seem dangerous to cyclists also. Some have street markings that are worn down and not noticed by unfamiliar riders. These so called lanes are supposed to prevent right-hooks from occurring because right turn mixing lanes are thought more dangerous.

Yes, that Google picture is the actual pre-vicinity spot on that Arizona road that the stoopid robot car saw and was unable to decipher and react quickly enough a cyclist walking their bike on the far right of the roadway. And yes, there is no sidewalk there for pedestrians.

Edit correction above. The sidewalk is there.

My answer would be yes, that would be my preference (lane to the right) especially on any faster moving street. I just don't want to get surprised by a driver or robot with a improperly-merging -quick -right-hook.
I expect David and clp would also have the same preference.

Amen.  I guess it's a lot less expensive to paint lines on a roadway than really create a bicycle/pedestrian friendly environment.