I look forward to improvements on the Lakefront Path but detours must be provided while construction is underway.  This is unacceptable: 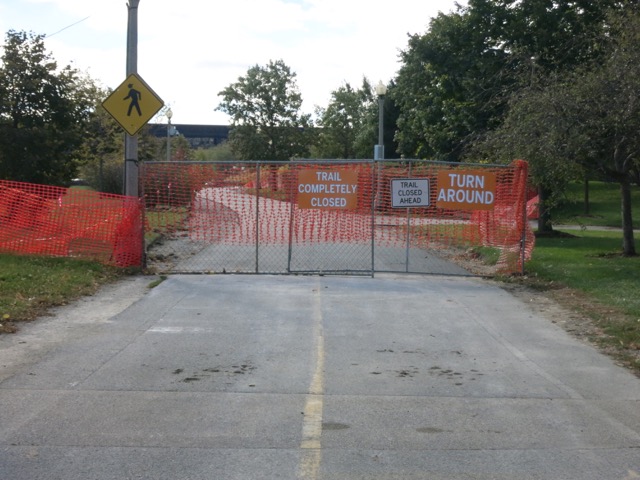 It is annoying that they don't post the detour options and I agree that they should. I assume you already know this: the seawall path is available (400 ft to the east) and can be taken to avoid the closed of LFP section. 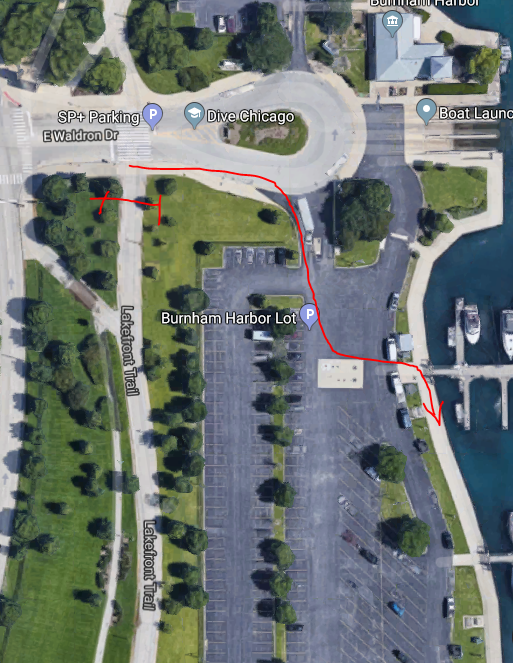 i have a somewhat bad habit of ignoring those signs (when work is not actually going on) and seeing for myself just why a path is closed and if the stretch is still passable, if i can get around the barricades. Recent work along the Salt Creek Trail had signage directing a detour along a busy, fast road. Bad detours can be worse than risking a rough trail.

Imagine the fury if they did this on a street to cars!

I rode through here a few weeks ago early in the morning and all the pedestrian lights were switched off. It was pitch black and I nearly ran into the fence/gate across the path at the south end of this section because I couldn't see it (even with a headlight).

The seawall is also a little dangerous to ride on when the sun is down. It's very dark out there, no pavement markings, and hard to see other peds/bikes, plus it's slippery when wet.  I encountered several people riding through here with little/no lighting on their bikes.  It seems crazy to me that this is an acceptable detour route from a liability point of view.

I had the same thought... "Imagine the fury if they did this on a street to cars!".

I am not sure but my reading of the plans on the Park District website is that they INTEND for the seawall to be used by runners/walkers once this is complete. If that is the case it would be totally crazy!  I've ridden on the sea wall many times, including at night and including when the water has been flowing on it. However, I am talking about less than an inch. If I were to encounter even an inch of water I'd probably turn around for fear of getting pulled into the lake at any moment due to an unanticipated wave.  As it was some parts of me (feet and butt) got pretty wet.

Permalink Reply by Phillip Hutchinson on November 8, 2018 at 1:37pm

It'll be interesting to see if pedestrians/joggers actually use the seawall, or just run on the bike path. The plan shows the existing switchback ramp to be part of the ped path, which seems like something most people will just ignore.

I kinda suspect that the seawalls won't be the pedestrian path even though this plan shows it. I think they are widening the existing path such that half can be pedestrian and half can be cyclists.

While the construction crews were ramping up to begin the path work, they placed stakes several feet out from the existing path through this area. Additionally, they cut down all the trees that were in the zone between stakes and the existing path.

I could be totally wrong, but I hope that the widened path will accommodate both cyclists and peds.

Due to being completely terrified of riding along the retaining wall, especially on a dark and windy autumn night on the eve of ice season, what I did here was bang right, cross Museum Campus Drive, and take the sidewalk down to the south end of the parking garage. Cross Museum Campus Drive again and go past the George Lucas Museum Memorial Parking Lot. Last time I was down there (Disclaimer: it was about a month ago), you could pick up the trail again at the Divvy station at the south exit from the Burnham Harbor lot/drive.

But if the trail is closed for the entire length east of McCormick Place, then almighty help us all, because that is the one and only pathway along that link. Unless you can still, like, get inside Lakeside Center and just walk through it from one end to the other.

Almighty help us all, the one and only trail is closed all the way to 31st St Beach. (Or from there, if you start south.) People are taking the seawall like it's the safest thing in the world, so good luck to you all. I am guessing that lawsuit about the algae has prompted the Park District to cover their butt by simply instructing people to turn around.

This is my commute. We have to ride along the seawall. You can take an "upper" path along the seawall to avoid the worst and wettest patches, but I won't even attempt this if it goes below freezing or on an especially windy day. I watched an experienced commuter slip on her bike and almost go into the lake yesterday morning. This morning, most of the 31st St Beach was blocked off, but it's possible to detour into the parking lot.

I'm really upset by the sudden closures. They've nearly made me late a few times, and the first time I encountered the McCormick closure was late at night, when I didn't know the path to the seawall so well. I was about to call a freaking Lyft and considered abandoning my bike, since I don't ride with a lock. Fortunately, another cyclist came by and tipped me off.

Am I missing some way to be notified about these stupid closures?

There are some lyft/uber drivers at night that will agree to pickup you and your bicycle if you take your front wheel off and their trunk is big enough to close with a bungee cord. (don't abandon your bike because you don't ride with a u-lock! )