It’s Been 2 Years Since The City’s Bicycle Safety Council Met. Advocates Are Pushing For It To Come Back

CHICAGO — A city-run group that worked to make Chicago streets safer for bicyclists hasn’t met in two years — despite its members, cyclists and safety advocates repeatedly asking for the work to resume.

The Mayor’s Bicycle Advisory Council hasn’t met since March 2020, though its members and stakeholders are supposed to convene four times a year to advise city officials on infrastructure, safety issues and other topics that affect bicyclists.

The group’s online meeting archives haven’t been updated since 2019.

The rest of the 2020 meetings were canceled via email after the pandemic hit. Kyle Whitehead, a spokesperson for the Active Transportation Alliance, said city leaders have not updated his organization about meetings since then, “despite repeated outreach by Active Trans and several other advocates.”

While the council meetings have disappeared, the numbers of bicyclists killed and injured have gone up in Chicago.

The Chicago Metropolitan Planning Agency reported a more than 25 percent increase in the number of bicyclists and pedestrians who were seriously injured January-September 2021 compared to the same period in 2020.

A Chicago Department of Transportation spokesperson did not answer questions about whether the council will return, but he said the agency is going to announce in “coming weeks” a new way for residents to engage with CDOT. But CDOT’s kept mum on the details, and transportation advocates said Chicago’s officials have long shrugged off accountability when it comes to bicyclist safety.

“It’s been a really inopportune time to basically have no more feedback but still have constant pushback from drivers against the small, life-saving improvements that CDOT was putting forth for cyclists,” said Jacob Peters, the council’s West Side community representative.

The group had nine community representatives who would “stay abreast of all the different complaints” in their area, and give presentations on “what the city is doing well and where they can improve, what the barriers are to cycling in the part of town [they] represent,” Peters said.

Residents could also use the meetings to comment and ask city officials and council members about bicycle-related concerns. The city’s representatives were “guarded” about what they’d say, but “at least there was a meeting, and there were notes,” said Joe Sislow, the council’s Northwest Side community representative.

Christina Whitehouse, founder of bicyclist advocacy group Bike Lane Uprising and a member of the council, said bicyclists have asked for the council’s meetings to come back “over and over and over,” especially since other city-run groups have met remotely during the pandemic.

Were the bicyclist council still meeting on its regular schedule, members would have convened the day after this year’s first cyclist fatality, when Gerardo Marciales was killed on his bike crossing DuSable Lake Shore Drive.

Officials had been warned about the kind of traffic violation that led to Marciales’ death during a 2018 meeting for the Mayor’s Pedestrian Advisory Council, which is similar to the bicycle council.

“There has always been a really effective cycling advocacy community in Chicago that could be tapped into by any part of the government,” Sislow said. “The Lightfoot administration hasn’t really done much to continue past community outreach to figure out ways to solve problems.”

Sislow joined the council when Rahm Emanuel was mayor. Emanuel “never showed up,” but he supported the process, Sislow said.

After Lightfoot became mayor, there was some uncertainty about what would happen to the meetings, Sislow said. Shortly before the pandemic hit, CDOT told council members it was going to hold “an investigative period” on restructuring the council, Sislow said.

Now, the council has “drizzled out into nothing,” Sislow said.

The Mayor’s Office did not respond to questions about the council. 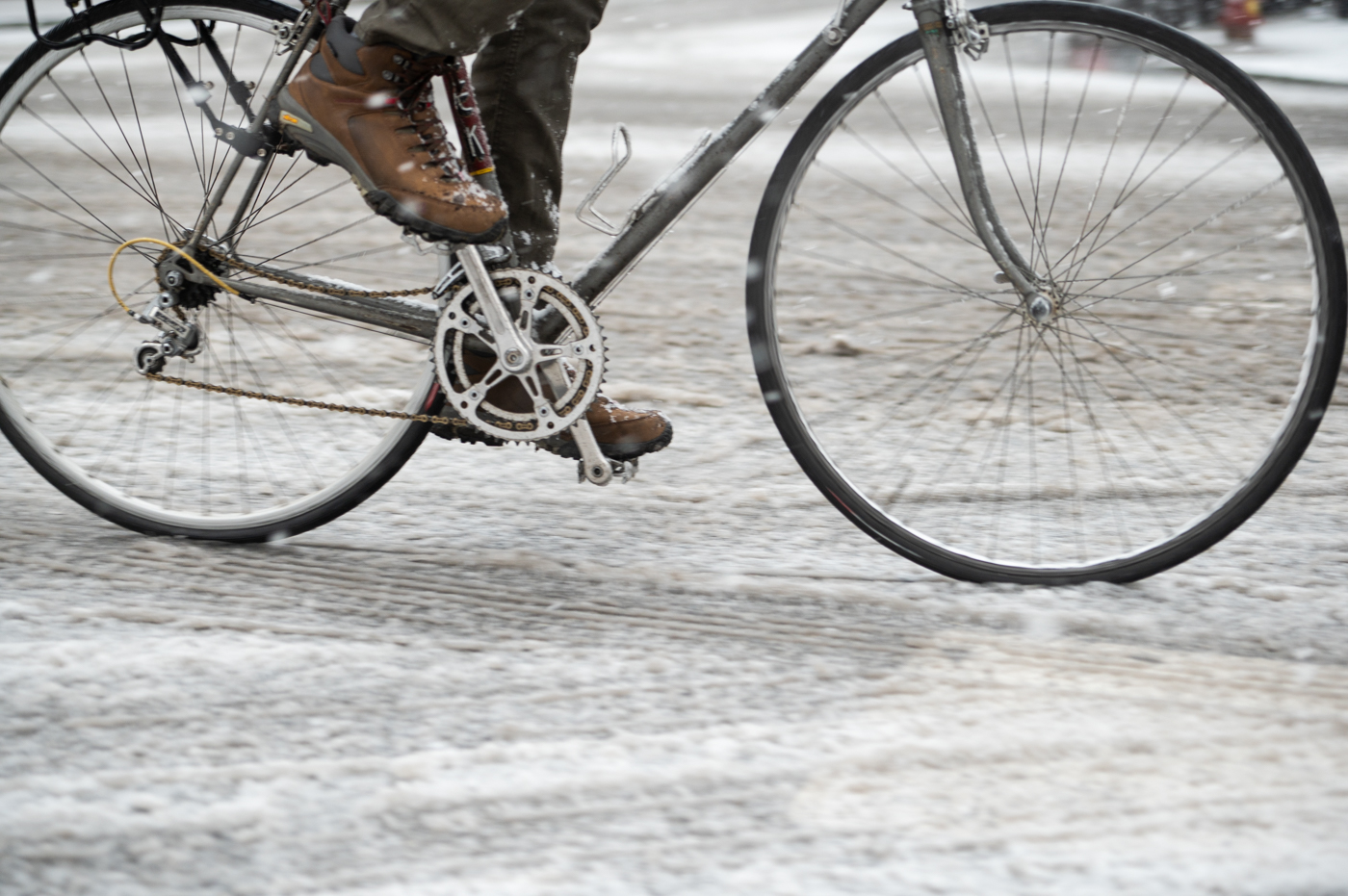 By ending the council without explanation, the city is effectively saying, “If you don’t have a driver’s license or access to a 2-ton car, your voice matters less,” Peters said. “Be happy with what you’re getting and don’t complain, even if it means you die.”

CDOT partnered with the Transportation Equity Network to create a Strategic Plan, which was released in June, and “to hear and learn from community perspectives on transportation and our work,” a CDOT spokesperson said.

Lynda Lopez, who co-founded the Transportation Equity Network and once served as a bicyclist council community representative, said the meetings between the network and CDOT aren’t intended to replace the council’s meetings.

“It’s not the same format and doesn’t address the same issues,” Lopez said via email. The network “is more comprehensive in its scope in addressing and discussing transportation (walking, biking, transit) issues in the entire Chicagoland region.”

And the bicycle council’s community representatives weren’t given a chance to be involved in the meetings between CDOT and the Transportation Equity Network, Peters said.

“It’s harder for [CDOT] to do their job to make something transformative happen when there aren’t opportunities for advocates to pressure the people who are standing in the way,” Peters said.

A CDOT spokesperson said the agency will launch a “new forum for advocates and stakeholders to engage with the department on transportation-related issues at the intersection of walking, biking, commuting, safety and other mobility concerns.”

Bicyclists and advocacy groups have long called for more action from the city when it comes to making the streets safer for bicyclists.

But with the council no longer meeting, there’s “really no centralized location” to find out information about the city’s bicycle safety plans and issues, Sislow said.

“Other than occasionally reaching out to CDOT, and they do a lot of shrugging,” Sislow said.

CDOT released a plan in June to build safer streets and create more bike lanes, among other efforts. But Active Trans — one of the biggest bike advocacy groups in Chicago — isn’t aware of any progress on the plan because CDOT hasn’t shared information or hosted a forum where residents could ask questions, Whitehead said.

A CDOT spokesperson said the agency plans to provide an update on the plan “this summer to coincide with the year-one anniversary.”

It “seems counterproductive” that CDOT has said it will expand bike lanes when it’s gone years without hearing from bicyclists through the council, Peters said.

“When there aren’t public avenues for feedback, it’s harder to hold people accountable for promises that are made and to let people know that there are a lot of us who don’t think that enough has been done,” Peters said.
Credit: Colin Boyle/Block Club Chicago
A person bikes along 71st Street in South Shore on Aug. 19, 2021.

The Mayor’s Bicycle Advisory Council had flaws, which its members said they flagged to city officials — only to see no changes.

Whitehouse said she repeatedly asked the council’s coordinators to hold meetings after typical work hours, rather than during the day; to record meetings and to provide a virtual way for people to watch and attend. Nothing changed, she said.

Whitehouse ended up hiring a film crew to record the meetings so people could see what happened if they weren’t able to attend, she said.

When Divvy was coming to Chicago, the meetings provided “an avenue to ask questions and get answers” about the program, Sislow said. But he didn’t feel the community representatives generally received support from the meeting leaders, he said.

Despite those problems, the council benefitted Chicagoans, transit advocates said.

“It definitely didn’t follow a format that was probably the most productive, but it was better than nothing, which is what we have now,” Whitehouse said.

Despite their flaws, the meetings gave members a way to get updates about biking infrastructure and cyclist deaths, Sislow said.

“That avenue has even been cut off now,” Sislow said. “They’ll release a press release or do some stuff on social media, but the information doesn’t get out the same way it did before.”