Is the new Halsted Street bridge a scary ride?

The Illinois Department of Transportation likes big bridges, even on two-lane Chicago streets. The beautiful new Halsted Street bridge features wide sidewalks, bicycle lanes and a bike-friendly concrete surface. But does the new four-lane configuration turn what would otherwise be a very bikeable bridge into a scary ride?:
http://gridchicago.com/2012/does-the-new-tied-arch-bridge-on-halsted-encourage-speeding/ 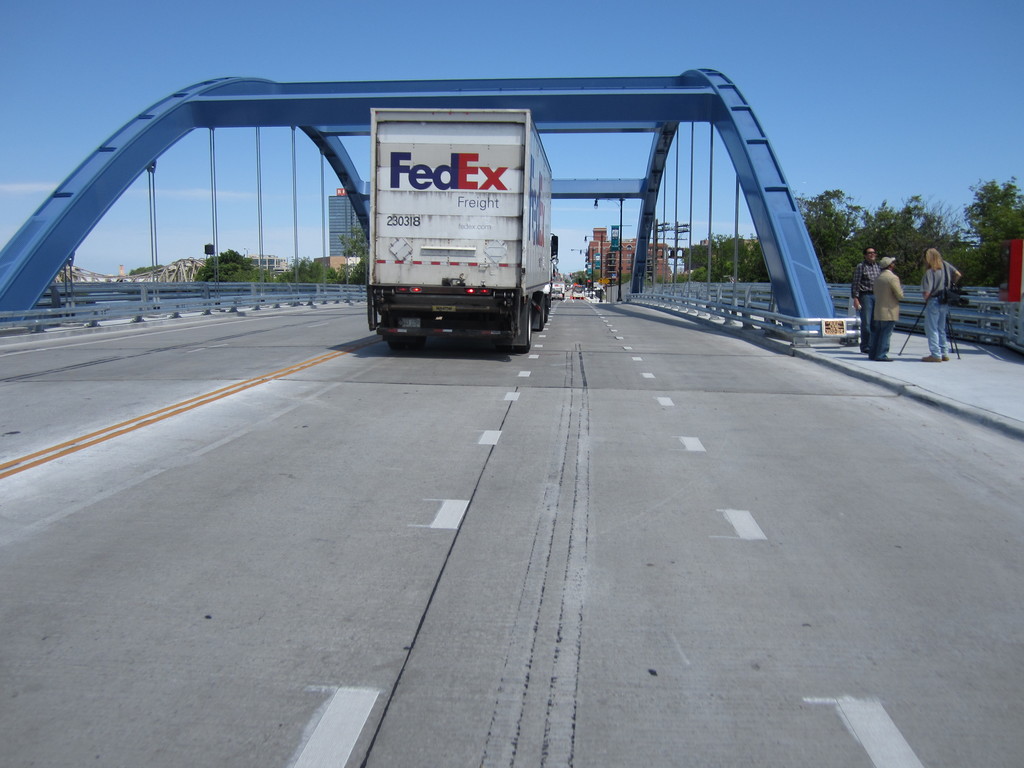 I rode it the other day.  Thought it was nice.

I notice automobile drivers speeding all day/every day.  I (unfortunately) expect it in my daily commute.

I was comfortable with the bike lane.

in it to win it said:

I notice automobile drivers speeding all day/every day.  I (unfortunately) expect it in my daily commute.

I was comfortable with the bike lane.

My sense is that for experienced riders like us, the solid bridge decking makes up for the faster car traffic and floating bike lane. However, I think the new configuration might be a dealbreaker for novice riders who would have been comfortable on a solid-deck, two-lane bridge with bike lanes.

I work right on Goose Island by the bridge and don't really use it when I commute on my bike (95% of the time - I prefer to enter goose island by the Cherry St bridge).  When I do drive and use it I have observed some real confusion with bikers going north where the floating lane starts and some dangerous car crossings over the floating lane at rush hour.  Last week  while driving home there was a cyclist in the floating lane on the bridge and one riding adjacent to him to the far right in the car right turn lane.  Compounding the issue was a bunch of cars speeding in the right lane and trying to cross into the left lane on the bridge.  When the light changed there were at least 3 cars stopped in the bike lane. Personally I don't like the arrangement at all.

Interesting. If you feel like it, please keep an eye on the bridge next week and keep me posted on what you see.

Traffic passing bikes on both sides? That's a no-no! Where's the escape route for cyclists?

City traffic planners evidently still have a lot to learn. Put it this way: if pedestrians had to walk an unprotected lane like that there would be a huge outcry. Cyclists are no less vulnerable.

This configuration is terrible. I'm not sure if the rain made motorists more idiotic, but I had a number of conflicts on my ride home yesterday. A few people swerved in front of me on the bridge and were generally going too fast. One driver even tailgated me while I was in the bike lane! I stopped my bike in front of her, turned around, and informed her that this was in fact a BIKE lane and pointed to my bike repeatedly. Not sure if she got it, because she just gave me a dumbfounded look.

As much as it might be an annoyance to right-turning drivers, I refuse to ride in bike lane that's sandwiched between two lanes of car traffic. Same as on Roosevelt bridge, I always ride next to the curb. It's way safer.

Northbound on the bridge, the right turn lane is about 650 feet.  There's no telling when someone is going to switch lanes to turn right with that amount of distance.  The right turn lane also isn't marked very well, so some drivers will be in that lane, until they realize that Halsted narrows from four lanes to two after Division.  So after switching to the right lane, and realizing their mistake, they'll switch back into the left lane.  Then there are the drivers who like to use it to cut in front of traffic, who also change lanes twice in the span of 1000 feet.  All of that happens with cyclists stuck in between.  It's an accident waiting to happen.

Then you compare that stretch of Halsted with the rest of the entire corridor.  It is in many places a major retail, pedestrian street. But the area between Division and Grand is partly industrial with a huge right of way.  Of course people are going over the 30 mph city limit.  There's nothing for people to slow down for.  The height of those bridges would make it difficult to develop anything on the street level, but having four lanes on the entire stretch does nothing but give people the cue to go even faster.

It's a little selfish on my part, but I just wish they never would have finished that bridge.  Those weeks when they had the sidewalk open, but the rest of the bridge closed were heaven.  Then there's this last Friday when traffic was congested from North and Clybourn down to Halsted and Harrison.  Delivery trucks were constantly parked in the bike lane, but traffic was so dense you couldn't move into the car lane without getting honked at.  I might just hop on the bus the next time I have to go through that stretch.

Thanks for your input, Chainlinkers.

I feel that this design fails to meet any of the standards that CDOT has been promoting in the past few years (Complete Streets policy) or in the past 1 year (8 to 80).

I think the next step is to advocate for a pavement marking redesign, without waiting for an evaluation of the current situation.