Almost two years ago today I had my bike stolen. It was my second bike stolen in Chicago, but the first one was about a week old and I never had time to bond with it. This one was different. I had three years of bonding. I grew with the bike.

I lived in a loft with five other people on Milwaukee. Below that loft was another loft that had some new residents. There was a common area where we could lock our bikes up, rather than carry them all the way to the third floor of the building. There wasn't a ton of people in and out of the building, and we had just become friends with our only neighbors. I had come back to the loft one night with my girlfriend and we left our bicycles unlocked in the common area downstairs. There were three or four other bicycles down there at the time from my other roommates.

The next morning I went to leave for work and my bicycle wasn't there. It was gone. The first thing in my head was that I had taken it upstairs. That wasn't uncommon. I went upstairs and looked. Then I asked my roommates. One of my roommates went down to check on his bike, but it wasn't there either. We looked at the door, but it wasn't damaged. Someone had either propped the door open, or invited someone in that left with them. Since it wasn't us, it had to be the only other people in the building...on the second floor. I asked them about it while my roommate filed a police report. As it turns out, they weren't home, but one of them had left their son and his friend there with some booze, they got trashed and then decided to take our bikes to go home. He called his son and told him to come over. After talking with him, his son said my bike was too difficult to ride and he had left it somewhere. He didn't know where. My roommate had his bike returned that day. We worked out an arrangement for my loss, although I never quit looking for my bicycle.

Today as I was cooking lunch I received a phone call that I almost didn't answer. It went a little like this:

Guy: Hi, this is Jesse from Comrade Cycles. I am calling to let you know that we recovered your stolen bike. The KHS Flite 100.

Me: Wait. What? Which one...The black or purple?(my roommate just had a purple one stolen)

Guy: The black one, with the tire stitched on it and the short handlebars.

Me: No shit. It's been two years since I've seen that bike. That's crazy.

Guy: Yeah, someone came in and it seemed a little shady, so we looked it up. It showed up on Stolen bike registry.

Me: This is great! I really don't know what to say...Thanks! Where are you?

Me: No, it's no problem, I'll be in there today. I'll see you in a little while.

Guy: Okay, See you then. 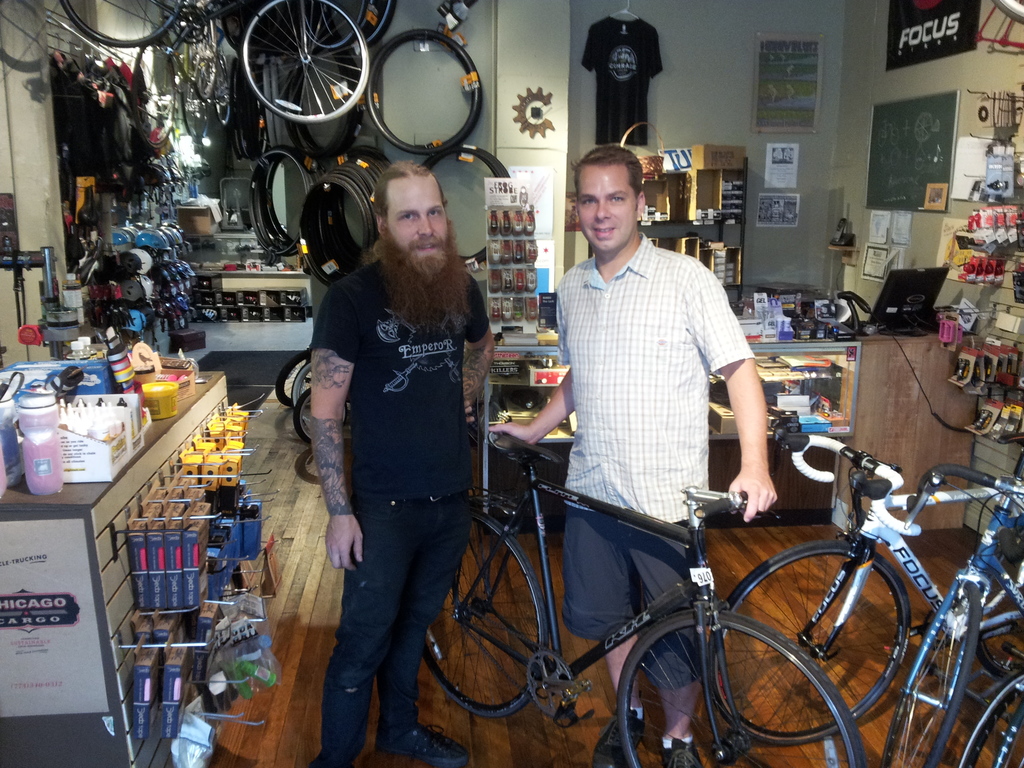 Jesse from Comrade Cycles, My recovered bike, Me!

My roommate and I went into the shop, both so excited to see my bike. My heart was pounding. I was patient and let the other customers go ahead. Finally it was my turn, I told them they had called, and that I was there to recover my recovered bike. He went to the back to get it and rolled out my bike. It hadn't changed. After two years I could only see two things that had been removed. The chain that was locking on the seat, and my U-Lock. Other than that, visibly it was the same bike. It was a flush of memories.

The story was that this kid had brought the bike in for something, but something didn't seem right about it. I had stitched a few inches of tire to the frame of the bike to create a bumper when I lock it up. I don't think this kid knew why it was there, and couldn't explain it either. I guess the bike had been sitting in a warehouse for almost two years. Jesse(the mechanic from Comrade Cycles) had searched my bike SN after it didn't feel right with this kid. He found my ad on Chicago Stolen Bike Registry and called me. When he told the kid that the bike was stolen and he couldn't have it, the kid said his dad was a police officer and he wanted it. So his dad was involved. His dad asked for the Police report number, which I'm happy to say I had on my C.S.B.R. ad.  Officer Dad said that it was two years ago, and that it had basically been forgotten or something. Jesse was kind enough to remind Officer Dad about the laws of trafficking stolen goods. I think Officer Dad was just upset about his son getting ripped off on a stolen bike.

The whole period of my bike leaving my loft and ending up in Comrade Cycles is a mystery to me. I'll never know exactly where it was and what happened. Who had had it, etc. I do know that Comrade Cycles is about 1.5 miles from where the bike was stolen. The bike didn't go very far.

There's some work that needs to be done to it. I need to get my rims trued, I'm going to take better care of it. Starting with a nice cleaning. It's great to have my bicycle back and I thought I would share it with you.

Great story, great beard.  It's so nice to see more and more cycle shops helping to bring back stolen bikes to their rightful owners.

Jesse had said that that was the sixth bike they had recovered in six months. That's a pretty good average in my opinion.

Yeah, congratulations!  And a BIG thumbs up to Comrade Cycles for their bike recovery efforts.

I think this is a fantastic stolen bike recovery story!!!

Those dudes at Comrade have an unbelievable spidey sense for shady characters. I hope thieves don't wise up any time soon.

Congratulations! It seems like a couple of bad apples getting overcome by genuinely good people.  I bet it feels good.

Permalink Reply by Crazy David 84 Furlongs on September 2, 2012 at 11:53pm
A great idea and a bad idea. If they did so, the bad guys woud stop bringing the stolen cycles in.

What a great story!  Comrade Cycles should paint some sort of symbol on their window every time they recover a stolen ride, such as Air Force pilots do on the side of their planes to count combat missions.

Thanks so much for telling the story with such skill.  And to Comrade:

I appreciate all of the comments! My post on Chicago Stolen Bike Registry is now marked as Recovered. The ad now has all contact information removed and a nice brief info box about the recovery.

What a great story!  Comrade Cycles should paint some sort of symbol on their window every time they recover a stolen ride, such as Air Force pilots do on the side of their planes to count combat missions.

three cheers for comrade !!! those guys are the best !!!

they are the anti- top 10 most wanted on the CSBR !