A spontaneous citizens group has risen up to stem the flow and control the speedway along Foster Avenue, between Kedzie and the Edens Expressway entrance. 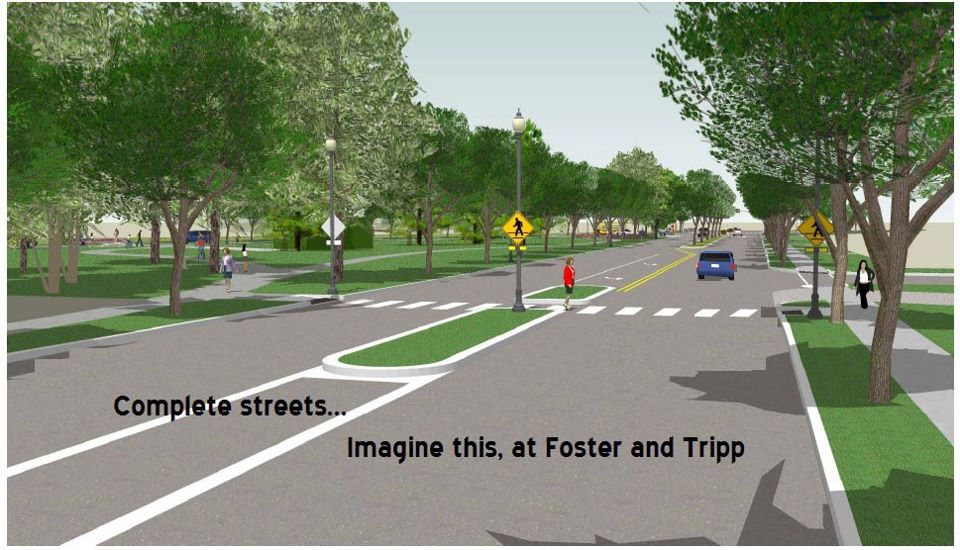 There was a meeting at the Mayfair Library on Apr 10th at 7 PM (the library closed at 8 PM) and over 70 people showed up to voice their opinions and concerns.  There were representatives from CDOT and IDOT but only Malihe Samadi, a coordinating engineer for CDOT, gave an extended presentation and list of "suggestions".

All of the suggestions are about painting and signs.  None of the suggestions were about reducing the four lanes to two, precisely what the audience was seeking.  The presentation focused on cars, not on pedestrians, children, seniors or cyclists. The Foster Safety ad-hoc committee wanted the lanes reduced to two lanes, one in each direction, adding bicycle lanes on both sides, and providing parking on one side.  Along this stretch of Foster Avenue there are two large parks: Eugene Field park and Gompers park.

A report on the story is at:

The subject of the Weber Spur extension of the Sauganash Trail was mentioned.  This will increase the number of cyclists exiting the trail to take Foster Avenue.

I wholeheartedly support this. As a frequent user of Foster heading west-bound, I can say that in its current form, Foster is maddening. I think there is a lot of potential to make this cyclist friendly, and that reducing this to 1 lane each way will have a positive, calming effect. As it is right now, there is an invitation for cars to speed and pass on the right, as they jockey for position. I see the same type of behavior on the two lane section of Lawrence from Western to Ravenswood.

I agree this is good news and a welcome improvement.

I avoid the stretch of Foster between Pulaski and the Edens as if my life depended on it. Literally. Drivers easily go 50+ mph on that stretch and the faster ones are usually on the right passing slower cars. At least there are good alternates with Bryn Mawr, Argyle, and Lawrence.

Foster could end up being a good alternative commuting route to Lawrence, which is a mess at evening rush-hour.  As long as they don't put a protected bike lane in (keep that crap out of the NW side).

This would be a better idea with the medians removed. Installing medians will speed cars up, because the drivers will be further from oncoming traffic and will end up treating Foster like a highway.

Getting it down to one lane would reduce the speeds.  It might even create stop and go traffic for a few hours a day.

This would be a better idea with the medians removed. Installing medians will speed cars up, because the drivers will be further from oncoming traffic and will end up treating Foster like a highway.