We have a few threads here and there with introductions, but nothing organized. For this thread, post your picture, pics of your bikes, and a small blurb about yourself (favorite foods, commuting routes, etc).

yes, this was ripped off from chifg... 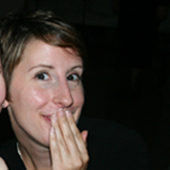 This is my baby. I named her Claudette, because she is a Peugeot and thus French. I always name my bikes and they are always lovely ladies. 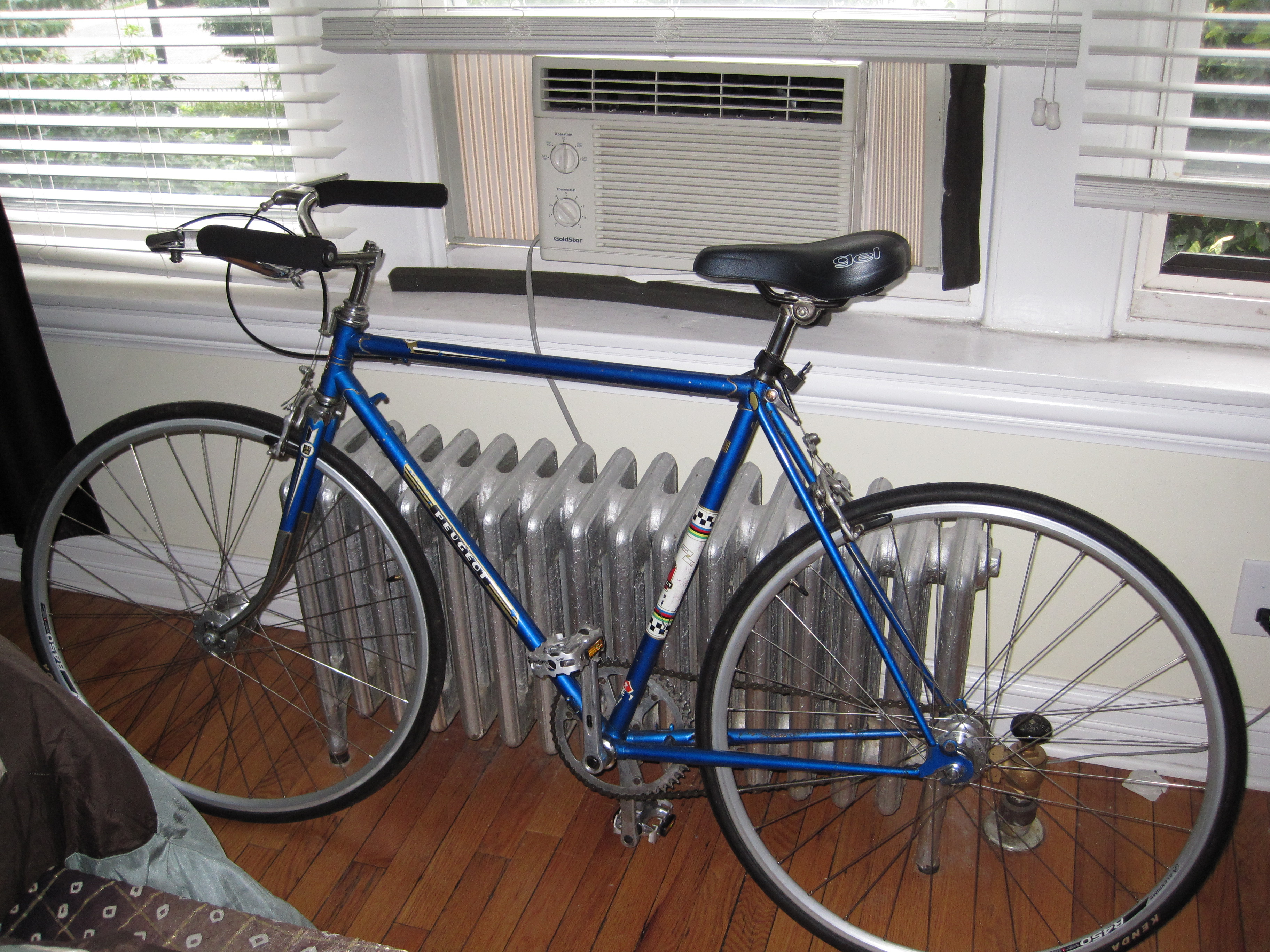 I live in Logan Square and work at The University of Chicago.

I'm new to the Chain Link and I'm hoping to find new friends and people to ride with. :)

i'm impressed with your dedication to waffles. have you tried the Giant Butter Waffle from the golden nugget?


i cant say as i have, last time i was in a golden nugget i think i had french toast but that was a couple of years ago.

working on that old columbia shouldnt prove to be too difficult, looks like all you'd really need is a 12" pipe wrench and maybe a hammer. :) ---obv kidding--- nice ride!

Permalink Reply by Morgan on August 28, 2009 at 10:28am
well, if you're really into waffles, those are the best value for the money in the city. they're 7 bucks and so light and fluffy...i always wish that there were 5 sections to them, not the standard 4.

i'm impressed with your dedication to waffles. have you tried the Giant Butter Waffle from the golden nugget?


i cant say as i have, last time i was in a golden nugget i think i had french toast but that was a couple of years ago. This is me avec helmet: 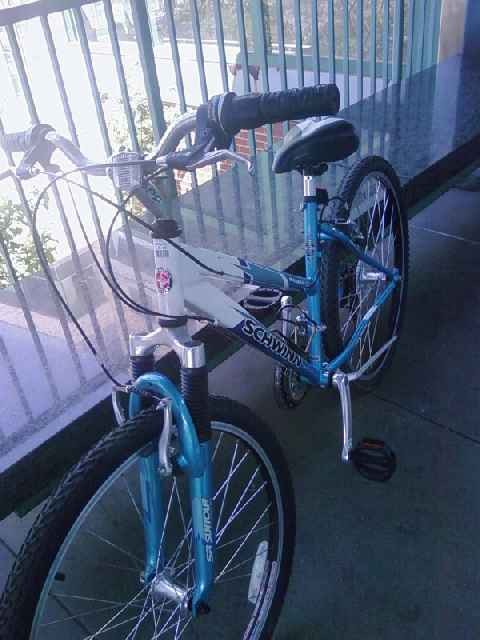 I'm interested in shorter rides (for now), particularly ones that involve drinks and/or are informational. I live way up in Rogers Park so rides near there are good too.

I love Chicago, socializing, drinks, etc. I'd hang out with me if I were someone else.

Kelli, I have the same Schwinn at home. That was my first baby!

Permalink Reply by lauren sailor on August 28, 2009 at 3:41pm
hello all! i never opened this thread before yesterday, fearing TONS O PHOTOS would slow my browser too much. but it wasn't so bad, so now i will slow all of YOUR browsers with pictures.

before i begin, a particular welcome to Shay and her blue Peugeot! my first bike was a light blue Peugeot from Working Bikes—also assuming the name must be French, i called it Pierre (even though it was a mixte!).

if it wasn't obvious, i also name my bicycles. they are mostly mens names, but i do have an underused green ladies Schwinn that i call Cadence (sorry, no photos).

i used to have this SWEET trek 1200 named Sancho. i got it via, and rode it across the country with, Bike & Build in 2007. it was mostly stock, though i did add a black Brooks B17s (ladies version), red bar tape, rear rack, and stickers galore.

here we are on a North Side Critical Mass (photo credit: bob kastigar) i should clarify that i still HAVE Sancho, but a head-on collision snapped the (carbon-fiber) fork and bent the (aluminum) frame in three places. so Sancho's waiting in legal limbo until i get an insurance settlement from the driver who hit me. once that headache is over with, i plan to strip the frame and hang it on my living room wall. (sorry, no photos, too depressing)

these days i am all about my fixed-gear, aka Ichigo, a Fuji Special Road Racer. ichigo got me through winter's EPIC headwinds with a relatively low 47-19 gearing (not to mention full fenders!!), which is perhaps too much spinning (i.e., sweating) for summertime, but what can ya do. these days ichigo has a front rack, but the fenders are off (until it cools off, at least!).

Ichigo and i can be seen on BikeSalute.com (photo credit: Dubi Kaufmann)

here's a picture of me before the 2009 Ride of Silence (photo credit: don sorsa) and another one by Don Sorsa at this year's Tour de Fat (after taking it, he bragged that he'd managed to get a picture of me with my mouth closed! i guess i AM pretty gregarious...) i live in bridgeport and work at a restaurant in the loop, usually commuting up halsted to canalport. my home-away-from-home is my boy's place in logan square, though, so i'm just as likely to be haulin' it down milwaukee. i grew up in florida and pennsylvania, and have been in chicago for six years now (cycling for four, doing it all year for three). i like to eat food, all food really, and my favorite drinks include beer, whiskey cokes, and white russians.

i roll with Critical Mass whenever possible, both citywide and local, as well as the Midnight Marauders. i put my biking enthusiasm to work with Break The Gridlock and BikeWinter, and i co-instruct the occasional Basic Maintenance class at West Town Bikes. thanks to my boyfriend's influence, i have been getting into bike polo recently. and of course, you can find me (and ichigo!) in the 2009 TyK pin-up calendar (bonus points if you can identify my legs in the lineup!).

ok, i think that just about covers it! if you see me rolling around, do say hello! don't be afraid to introduce yourself, and please feel free to RE-introduce yourself... i do suffer the occasional bouts of CRS (can't remember, uhm, stuff)... and you know, all you bike people start to look the same after a while :)

Permalink Reply by Vilda on August 28, 2009 at 5:37pm
Hey Lauren, saw you on Halsted a couple of days back but i didn't wanna honk at ya from the other side of traffic. Here's a belated hi! ;-)

I live in Logan Square and work at The University of Chicago.

I'm new to the Chain Link and I'm hoping to find new friends and people to ride with. :)

Hi Shay, just fyi there are a few of us on chainlink at the U of C or in hyde park if you're looking for people to ride with to critical mass or other after work rides. You should also like at the U of C Velo Club.

Hey, I'm DUG! I like hugging lamps after ingesting inappropriate amounts of alcohol...

As well as, from time to time, dressing up after consuming inappropriate amounts of alcohol... 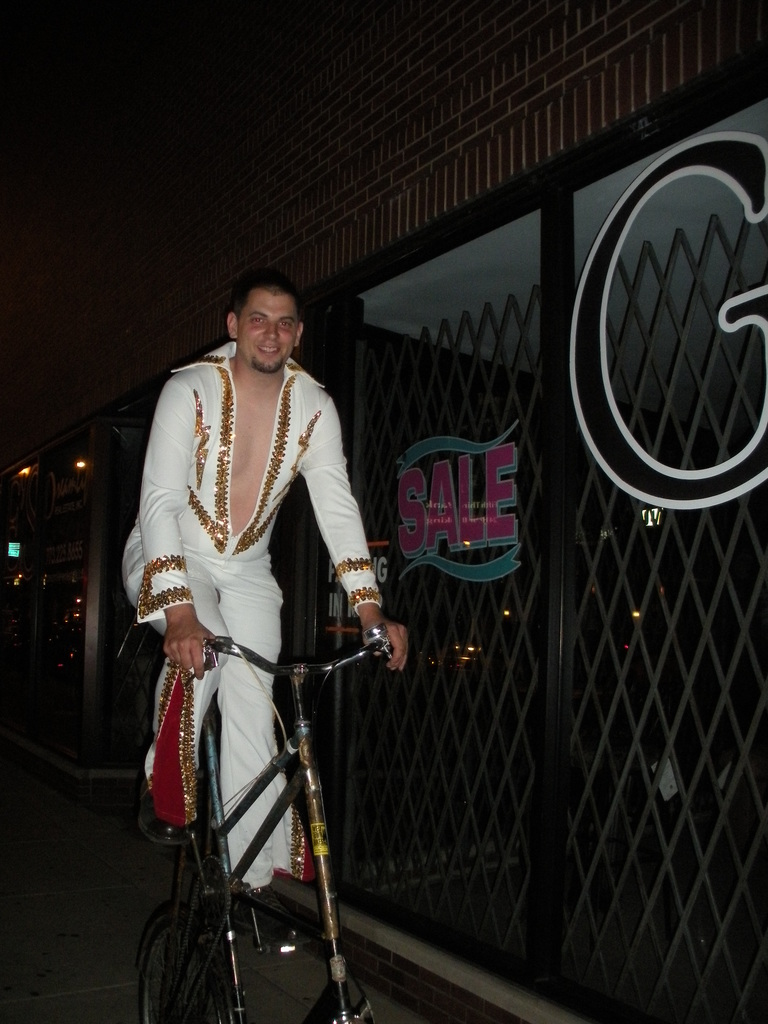 I also like the riding and building of bikes and a whole bunch of normal, and not so normal shit, that most of you probably don't care about what with this being a bicycle type thing here but I'm pretty sure we can all agree I'm freakin' awesome.

Often I ride this: 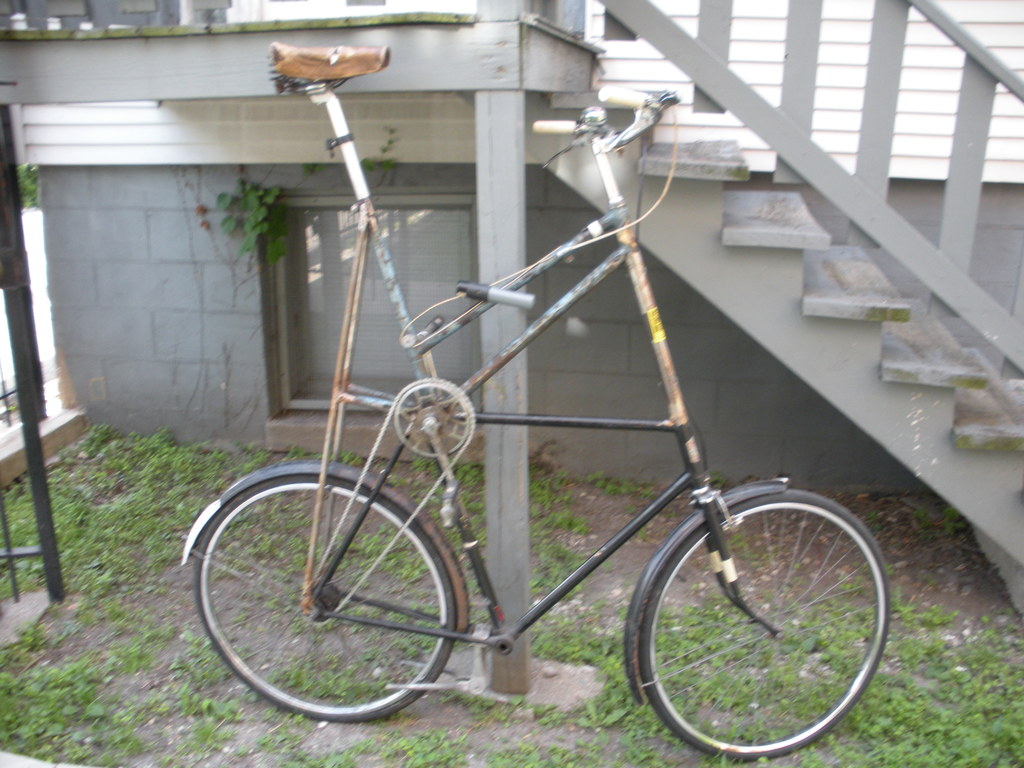 But I mostly ride my janky old conversion: I also have this cool old thing for trips to the store:

Beyond that I have a old Fuji road bike I'm not sure what to do with and a couple of more bikes I'm in the middle of building.