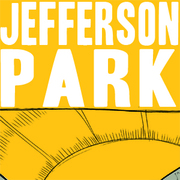 Jefferson Park, Chicago Community Area #11 is 10 miles northwest of the Loop. Nicknamed, the “Gateway to Chicago”, farmers once came from far and wide to sell their goods in Jefferson, named to honor Thomas Jefferson. Jefferson’s ideal location began as two Native American trails, grew to include the area’s earliest toll plank roads, and was thereafter augmented by rail and commuter lines. Today the area has a population of over 40,000, a tremendous amount of green space, historical homes and buildings throughout, and a namesake park on the National Register of Historic Places. Hop on your bike to visit an extra and intra-urban experience that barely feels like Chicago at the same time that it typifies it.

This is running of the Tour of Jefferson Park is being done in association with Good City as part of the Indian Boundary Bike Tours series, marking the 200th anniversary of the signing of the Treaty of St. Louis of 1816.

RSVP for Tour of Jefferson Park 2016 to add comments!