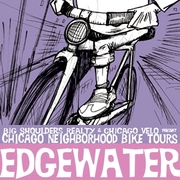 Edgewater is one of the most densely packed areas for fantastic architecture, the community has a variety of neighborhoods filled with unique homes, places of worship, schools, civic and commercial buildings. From beginnings as uninhabited brush, to early roots as a farmland, the area was first developed by a Philadelphia tobacco salesman named John Lewis Cochran who bought some farmland and began subdividing his lots in 1885. He named the area Edgewater, appropriate to its lakefront local, and developed much of the area. He is responsible for naming many of the streets and some of the homes in his five original developments are still standing and will be on the tour. Many other entrepreneurial developers contributed with their own developments, that along with Cochran’s helped Edgewater become known for its neighborhoods. Edgewater Glen, Andersonville, Edgewater Beach, Lakewood-Balmoral and several other smaller neighborhoods and historic districts help make up this diverse Community.

RSVP for Tour of Edgewater 2014 to add comments!