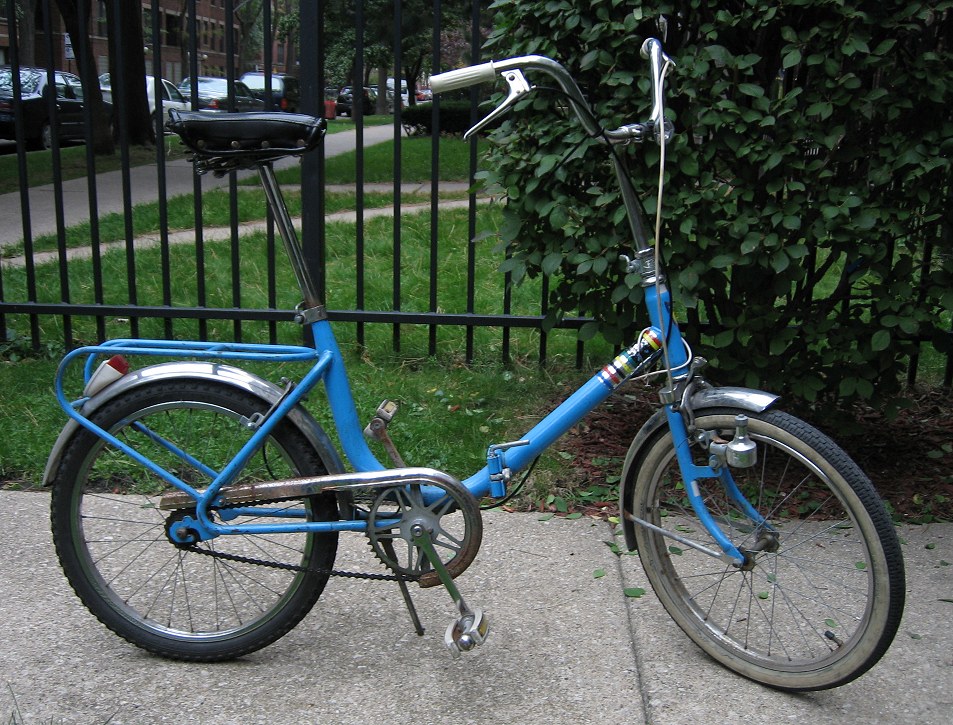 I rode it home and it felt mostly great. Needs just a little love. I'll probably remove the electricals, and maybe the rusty chainguard, and the back brake cable is seized, and may replace the seat, and add a new front light and rear reflector, and oil, and straighten the pedals, and measure it for a carrying case...
NOTE: This article is now maintained at http://bedno.com/body/bike/mine/folder
Was originally created here, but now mirrored from personal primary and subject to drift.

Comment by Andrew Bedno on October 13, 2009 at 1:43pm
On your advice, I'll leave the chainguard for now. But the electrics can go. So if I'm already not retaining it's original character, I'd still think to strip fenders and a brake, as it is quite heavy, and those parts are rickety. With all features restored this bike could fetch $200. As is, I may as well make it my own. Needs a name...
Acquisition story: Great example of modern social messaging working, walked just 8 blocks down my street to a group home bike sale on Spencer's e-advice. Damn, now I'm indebted providing bike doesn't suck. So he's there, goes check it out only $30, but soon guy says wanted $50. My imaginary girlfriend nagged don't I have enough bikes already, and we settled in the middle. Rode it home with much delight.

Comment by buddaa38 on October 13, 2009 at 12:46pm
Hey Andrew; Don't get rid of that chainguard. I have something that will take the rust off, and make it shine once again. You can call me or I'll see you at bar night this Thurs. Gannon's. SWEET BIKE not because it's Italian! !! :-) But it doesn't hurt to be...