A lot of people left the U.S. Cyclocross National Championships, held last weekend in Austin, Texas’ Zilker Park, dissapointed. The reason was that the final day of the event was unexpectedly postponed due to heavy rain and potential damage to 100 year-old “heritage trees” located along the muddy course.

Many racers, who had been training and preparing for months, were either forced to scramble to change flights, hotel reservations and take an extra day off work...or head home with nothing to show for their time and effort. 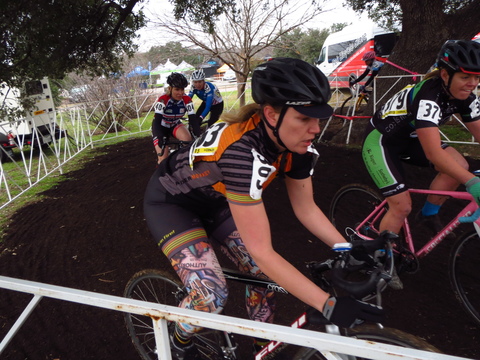 Fortunately, a lot of people did manage to have the ride of their life before the plug was pulled on a great weekend of racing. One of those people was Chicago’s own Katie Kolon. Racing for Spidermonkey Cycling, Katie got to experience the same twist, turns, climbs and drops that the pro riders do.

If you want a feel for what it’s like to tackle a technical, challenging, national-level cyclocross course, read on:

I decided kind of last minute to go down to CX Nationals in Austin Texas. As a category 4 racer, I could only race in the women’s non-competitive and the single speed races. I chose to race in the non-competitive category, which included all categories and some big names. The women who took the podium were all category 1 elite races. Carolina Gomez Villafane took first, Katie Clouse took second, and Jenny Park took third. The race was filled with around 100 women, including tiny juniors and a woman who looked to be in her 70s.

After packet pickup on Tuesday, I pre-rode the course in warm, 65-degree weather. I enjoyed the sun while wearing shorts and short sleeves on January 6 while Chicago suffered under oppressive negative degrees. On race day, the temperature dropped to around 50 degrees, which I prefer for racing. The course was almost a 2-mile loop and went like this.

The race started with a long and wide straight section on pavement with a little uphill at the end. Once on the grass, the turns started, and there were 180 degree turns on small hills, loops around trees with shredded woodchips, and ramps up and down the curbs that we constantly crossed. I had never raced in such a big field so I got to experience the clogging of riders. Women were getting off their bikes as the race slowed because it was so packed and there was nowhere to go. It took at least half a lap before it started to thin out. I started with a call-up of 70 and managed to pass a lot of people while also getting passed.

As the course progressed, everything technical got bigger badder and more extreme. The 180 degree turns on hills turned into blind turns on bumpy off-camber dirt and rocks. The little hills turned into big hills. We ran up one set of limestone stairs so we could white-knuckle back down the hill. This was the kind of hill where, as you approach, you keep craning to see the bottom because it drops off so steeply that by the time you can see the bottom you are headed back down.

Later, we climbed an even taller set of limestone stairs. These stairs were treacherous. They were uneven, bumpy, crumbling, and some stairs were as high as my knee. I shouldered my bike and used my left hand to grab on to the rocks in front of me while stepping up. I saw people run up these. I did more of a scramble and hoped not to sprain an ankle as I teetered on my cleats.

After the long stairs and some more riding around turns, there was a long weaving off-camber section followed by a steep downhill, 180-degree turn, and steep short climb. This was my favorite part to ride. If you went fast enough it was fine. It was a little muddy but hard enough not to slip. After the last little climb, which people chose to ride or run depending on the situation, there was another long fast descent followed by another 180-degree turn, two barriers on the uphill that seemed higher than 18 inches. After hopping over these barriers I had to run back up the hill I had just descended, jump back on the bike, and descend it again to the finish line. I have never ridden such a fun and technical course and I had a lot of fun just riding it. In my second lap, I was focused on passing three women ahead and gaining ground. On an off-camber bumpy blind downhill turn I was perhaps too focused on these women that were just bike lengths ahead and I went over the handlebars. I landed hard on my shoulder and hit my head. I wasn’t sure how bad it was and the course marshals were asking me if I needed medical, but I could not speak because the wind was knocked out of me. It took me what seemed like several minutes to recover and they called medical, but I started to get up. They asked me if I was ok and I think I said, “I don’t know, but I’ll find out” as I got back on my bike.

I lost a lot of time and places while on the ground and was out of my race mentality but I wanted to finish. I kept going, but slower. By the time I reached the wheel pit, which was in the last half of the course, closer to the end, I noticed I had a flat. I think it might have been leaking slowly from bottoming out on my rim going over one of the curbs. Anyway, I thought there were no neutral wheels so I asked if the mechanic would just pump up my tire so I could finish the race. He gave me a wheel instead. I finished my second lap and was pulled. I lost a lot of time on that lap and if I had not had the mishaps, I think I would have been able to complete a third lap.

In any case, I was happy to have completed the race without breaking anything and while having a blast. There were a ton of people there saying really nice encouraging things to me even though they didn’t know me. I also wore my crazy tights and I guess because Austin has a big affinity for tattoos, several people thought both my legs were entirely tattooed and were telling me how awesome they were. That was fun.

Thanks PJ. Update: I think I cracked my rib, but it's not too bad.

Katie, that's awesome!  I'm so proud of you going down to the biggest annual cyclocross event, nationals, and hammering out a race on probably the toughest course you have every faced, not to mention an extremely tough field.  Great job!  Can't wait to see you back at next season.