Chicago Women’s Elite Cycling: Teaming Up to Take on The Nation’s Best 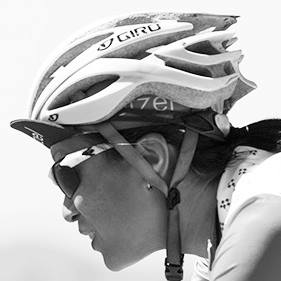 A 90mph fastball won’t get you to the big leagues, no more than 4.30 40-yard dash guarantees you a trip to the Super Bowl.

Athletic potential can only be realized when combined with the right coaching, training, nutrition, and (perhaps most important of all) a great team. Nowhere is this more true, some could argue, than in road cycling.

Perhaps to the casual observer, a road race may look like a bunch of people pedaling in a group, the winner being the one who pedals the hardest at the end. But in reality, road racing is incredibly nuanced and complex.

To put it another way, a whole lot needed to go right before that brutal, late-race attack or ferocious final sprint could be unleashed. The winning effort likely entailed months of hard work and preparation, equipment that performed flawlessly, and a perfectly-executed race strategy requiring several supporting team members to play a crucial role.

For all those pieces to fall into place, particularly at the elite level, a well-developed organization needs to exist. Without it, even the best cyclists fare no better chance of winning than, for example, LeBron James attempting to take on the Chicago Bulls all by himself.

The problem is this: If you’re a talented young football, basketball or baseball player, there’s a fairly well known, straightforward, and structured path to elite level competition. If you’re a talented cyclist in most of the US, this is certainly not the case. This is particularly true for talented women cyclists.

The result of this problem is that lots of women racers never get to reach their full potential. Forced to find their own way, oftentimes they don’t even know what they don’t know. Then when attempting to compete as individuals against highly-developed West-Coast race teams (let alone European race teams), many feel discouraged, frustrated and wind up leaving the sport without ever truly knowing what they could have been capable of. In a nutshell, CWEC will aim to perform two functions. The first is to provide elite-level resources to Chicagoland’s small pool of female category 1 and 2 road racers. The second is to provide promising category 3 and 4 racers an avenue to develop into elite-level cyclists.

For most of the year, CWEC will provide their athletes top-level coaching, training and nutritional advice. Locally, the racers will continue to compete on their respective teams. Then, when the members compete at national-level events, they will join forces as a “composite team.”

Leading up to and during these race events, the composite team will be armed with full mechanical support, a team manager and even a directeur sportif. Just like in the pros, the directeur sportif will follow the peloton in a team chase vehicle, communicate with the riders as the race unfolds, provide real-time mechanical support (such as spare wheels) and ultimately help the team execute their race strategy. The strategy will take into account the nature of the race itself (the course profile, for example), and then assign roles to the team members based on their strengths and abilities. A flat course, for example, might require the members to work together to reel in breakaways and then lead out their best sprinter at the finish.

With this support system in place, Chicagoland’s best female riders may finally have an opportunity to realize their full potential, and possibly find success against the best riders in the country.

On Sunday, January 25, the CWEC was unveiled to Chicago’s cycling public. The “Town Hall” meeting took place at the Edge Athlete Lounge. Featuring a short presentation and Q&A session, the organization’s directors and members had a chance to describe their motivation for improving women’s racing in Chicago. 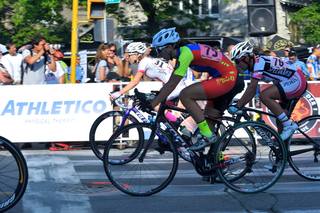 CWEC Co-Founder and Team Captain Daphne Karagianis described a crucial moment that helped inspire the creation of the CWEC. During last year’s Joe Martin Stage Race. She recalled looking around the peloton and seeing all the familiar faces from Chicago’s local scene. Everyone was competing as individuals against well-organized teams, doing their best not so much to win, but merely to hang on to the pack. Photograph by Fernanda Guzman.

“I thought if we could all compete as a composite, as a team, how much stronger we would be, how much more of a difference in the peloton we could make,” Karagianis said. “We need to represent Chicago on a higher level, and to do that, we need to do it as a team.”

CWEC’s Head of Development, Francine Haas, added that knowledge is power. And as a coach, she loves seeing young racers become empowered.

“Bike racing can be scary sometimes,” Haas said. “The more you know about bike racing, the more likely you are to succeed and continue in the sport.”

Guest speaking at the event was Elaine Nekritz, Illinois State Representative for the 57th District. A successful category 1 road racer during the 90s, Nekritz recounted an enlightening experience from her competition days.

Specifically, a timely, somewhat serendipitous late-race move netted her a 3rd place finish in a race where she was pitted against national champion-level competition. She said the experience taught her that she and her fellow Chicago-area racers truly could succeed on a national stage. But in hindsight, a well-organized group effort could have yielded more consistent results than hoping for the occasional stroke of good luck.

“What it showed was that we could compete,” Nekritz said. “We just didn’t have the wherewithal to make it happen. None of us ever thought ‘maybe we should join forces.’ That’s why I’m so excited about this program.”

When asked why not simply form an elite team, CWEC Co-Founder and President Cathy Frampton said that a composite team enables Chicago’s best to be competitive at national events, while maintaining the high quality of local races.

“To be sustainable, the CWEC program needs a healthy pipeline of women racers that want to aspire to compete at the national level,” Frampton said. “That means we need to keep the local racing scene dynamic and exciting. We also need to help develop and encourage these prospects. With the composite structure, CWEC riders will race for their local teams in local races, providing comradery, mentorship, and encouragement.”

Leah Sanda will be performing team manager duties. Currently, CWEC is in search of a directeur sportif.

As you may imagine, providing elite-level support to promising local races is not inexpensive. The financial burden will partially be carried by the racers. But to truly develop young talent, support for the community will be necessary.