Permalink Reply by Anne Alt on August 5, 2009 at 6:28pm
This week I've ridden from the trailhead at 83rd to 115th. There is minimal broken glass - scattered tiny pieces only. Trail conditions are excellent.

Permalink Reply by Anne Alt on March 12, 2010 at 4:59pm
The other day I rode from 83rd (Dan Ryan Woods) to 95th. The snow was all melted and the trail was mostly dry. There's a bit of tree debris (twigs and small branches) in the woods, and a small amount of broken glass (2 bottles or so) from 91st to 95th - easily avoidable.

This morning I rode from 105th to 115th. Found a small amount of broken glass and dog poop, also easily avoidable. I'm hoping to ride down to Whistler Woods sometime in the next week and check out the rest of the trail. Anyone want to take a ride?

Permalink Reply by Anne Alt on March 15, 2010 at 6:14pm
Yesterday I got a trail report from Peter Taylor, who rode the trail from 105th down to Whistler Woods. He reported the same conditions I encountered from 105th to 115th. He said that the worst conditions (broken glass and trash) were between 115th and 119th, but that the debris there was avoidable and that conditions were better south of 119th.

Permalink Reply by Anne Alt on March 29, 2010 at 4:07pm
Last week I did a ride with Larry Unruh from 105th to Whistler Woods and back. There were some fairly bad areas of broken glass, especially from 111th to 119th, where the glass was spread all the way across the path and was unavoidable. We cleaned up the worst areas so that these sections would be easier to ride or walk.

We noticed a fair amount of trash in the same area and in a few other locations. I've made reports to the park district and 311 about trash and overall conditions.

Regular maintenance by the park district should be starting soon.

Permalink Reply by Anne Alt on April 15, 2010 at 3:13pm
I did a ride today from 105th to 119th and back. Regular park district maintenance has started for the season. The path has been swept and trash has been picked up. There was only a tiny amount of broken glass on this section of the trail and minimal trash. Riding conditions are excellent.

Permalink Reply by Anne Alt on April 29, 2010 at 8:23am
On 4/24, we had a TreeKeepers workday on the trail between 111th and 115th. We trimmed some larger trees, cut down many smaller ones, and cleared some deadfalls. Hopefully this will greatly reduce the amount of overgrowth we have later in the season. I hope to schedule other workdays in the future to work on sections we didn't touch last Saturday. Thanks to everyone who came out to help! 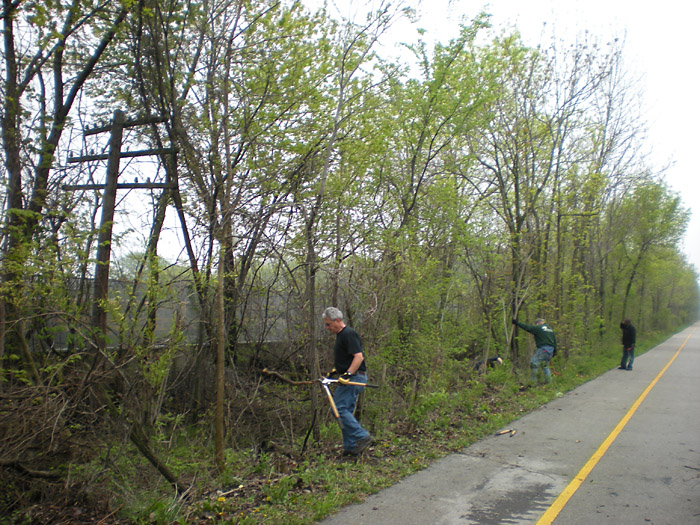 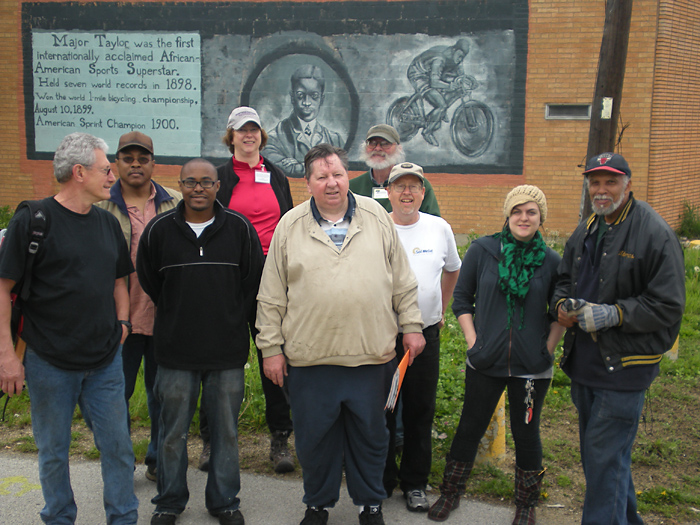 Permalink Reply by Anne Alt on June 8, 2010 at 1:19pm
I've ridden the trail a few times recently from 95th to 83rd, and broken glass has been minimal from 95th to 91st and non-existent further north.

We did a clean-up day on Sunday from 91st to 95th and trimmed trees, removed weeds and cleaned up some trash and broken glass. We'd like to offer a big thank you to Brian Lewis-Jones of Americorps and the amazing group of volunteers he brought from the American Red Cross and Mayor's Bike Ambassadors. They talked to folks up at the 83rd St. trailhead about bike safety and first aid, and also helped us with clean-up.

While we were working, many riders and walkers stopped to say hi. A Beverly Bike Club member stopped to chat with us near 95th St. He thanked us for our work and said that he'd just ridden all the way to Whistler Woods and back and that the trail was in great condition. It was good to get that positive report.

Permalink Reply by Anne Alt on June 8, 2010 at 1:20pm
Here are a few pictures from Sunday's workday. Permalink Reply by Anne Alt on June 19, 2010 at 2:24pm
I rode the trail this a.m. from 95th to just north of 87th. As expected after the intense storms last night, there's plenty of debris on the trail, especially in Dan Ryan Woods. I was unable to go beyond 88th St., as a crew was working to remove a large fallen tree.

There are a few large cottonwood trees between 91st and 87th that took a hit from the storms. One is bent over so it's only a few feet above the trail, blocking the southbound lane. The others are bent over much further than in the past, looking like the next big storm could take some of them down.

As after any storm, keep a careful eye out for branches and other debris so they don't take you down.

Permalink Reply by Anne Alt on June 27, 2010 at 5:56pm
I just wanted to relay a report and compliments from a Beverly Bike Club member who rode the entire trail from Dan Ryan Woods to Whistler Woods on Thursday 6/24. He said that the entire trail was clean - no broken glass, no downed trees. He especially appreciated that in light of Wednesday's storms. He also saw a few police patrolling the trail.

Permalink Reply by Anne Alt on June 29, 2010 at 2:50pm
I rode the Major Taylor Trail this morning from 105th down to Whistler Woods and back. Conditions were mostly good. There is almost no trash. Most of the area was freshly mowed. On most of the trail, there was almost no glass, with the exception of a 50 foot section just north of 119th and some street crossings south of 119th.

I noted the following issues:

* Graffiti on east side of I-57 bridge

* On 107th St., there are low hanging trees on the north side of the street just west of trail blocking the view of eastbound traffic.

* At 111th, parked cars and buses interfering with the trail crossing are still an issue. This makes it difficult to cross the street safely. See below. Wouldn't it be great to get NO PARKING signs for the crosswalk itself and for 8 feet on either side? 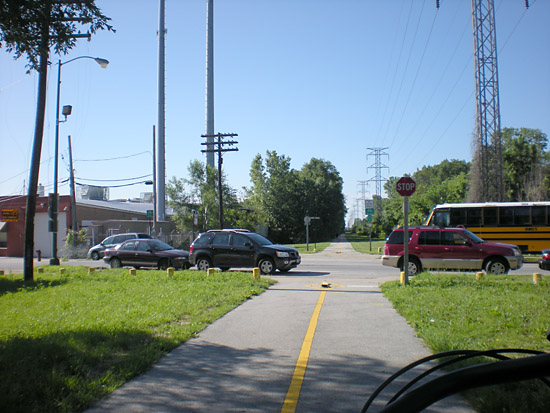 * At 112th, there is a fallen dead tree partially interfering with the northbound lane of the trail.

* The east edge of the trail is starting to get blocked by trees immediately north and south of 115th. Good location for a TreeKeepers workday.

* On the south side of 118th St. opposite the stone factory, the signpost for the southbound lane of the trail has been knocked down and is lying in the weeds. * There is major overgrowth just north of 119th, blocking much of the right of way for about 30 feet.

* At the 124th St. crossing, the signpost with trail and stop signs for northbound traffic is being engulfed by a small tree, which partially obscures the signs. 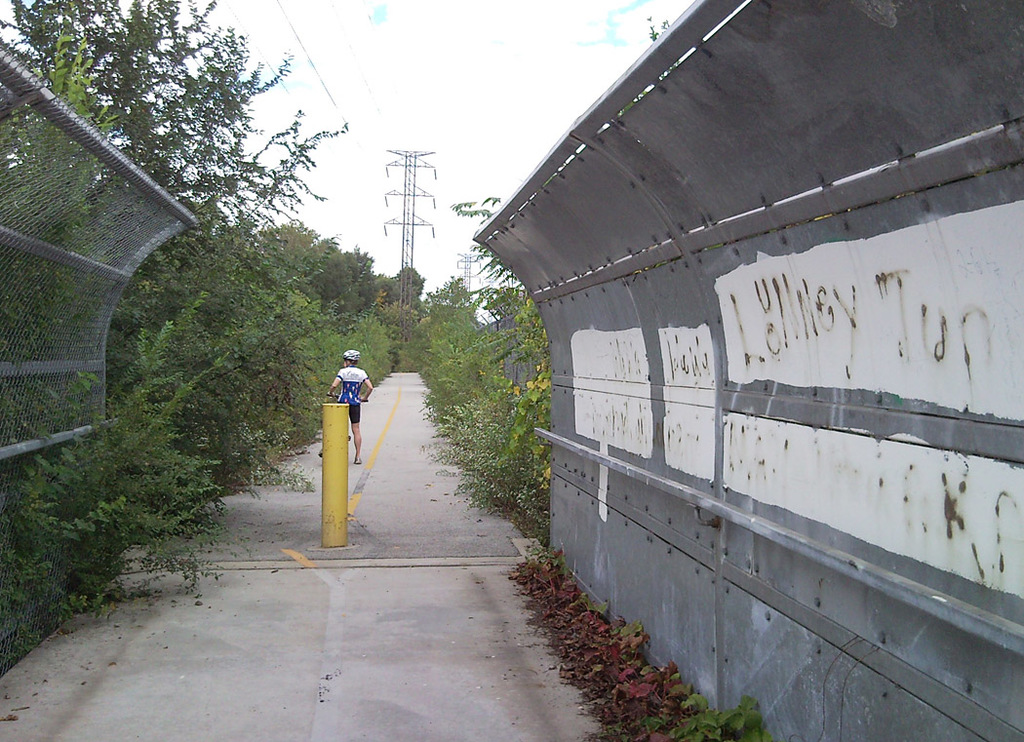