Why Fixed Gears Are Cool

Aside from the absolute recklessness of this guy its still flippin sweet....


Mash from romk on Vimeo.


Funny how we lose that as we get older

If want a more receptive audience you should have posted it on chifag. Then the discussions would be more about how the rider color coordinates his deep vee rims with his u-lock holster & vans.

I think this discussion is why so many people are still on chifg.com and refuse to sign up for thechainlink.org


Wow! this thread has everything! macho posturing AND homophobia. How about we just give it a rest guys?

Permalink Reply by Dr. Doom on February 11, 2010 at 5:23pm
On the one hand I think these guys are douchebags and on the other I'm kind of jealous because I just don't have it in me to ride like that. I think everyone complaining should at least admit it looks fun.

Permalink Reply by Ryan L on February 11, 2010 at 5:38pm
It's the "I'm so cool the safety of others means nothing to me" a-holes like this who are pissing off all the drivers that decide to take their frustrations out on me when I'm out riding. Boooooooo!

On another note, I uploaded my own fixed gear video last night. Um, well, kinda, sorta, uh, not really.


Funny how we lose that as we get older 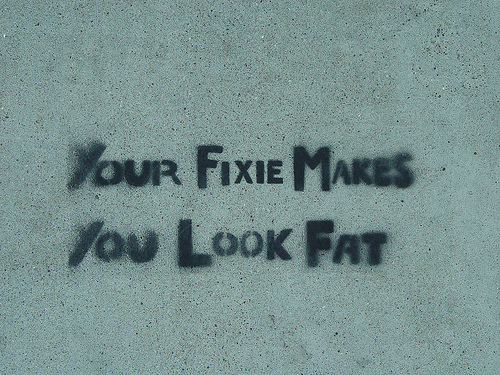 Since we are talking about flippin sweet dumbass tricks, how about this one. Look at the car in the far lane at 0:54. He would have done the cycling community-at-large a big favor by being less attentive.

Hmmm... "Aside from the absolute recklessness..."
My personal opinion is posting this display of brazen death-baiting with the herald, "flippin' sweet" is social recklessness. I would like to slap that rider with a couple hundred dollar fine and a court-order to not ride a bike for four months for that display around 01:00. As in, lost his license---if only that were possible in this case.

Permalink Reply by Doug Haynes on February 11, 2010 at 7:37pm
This is missing the point to the highest degree.

While I am pretty sure they would just find new and interesting ways to be douche bags if there where fewer cars that is beside the point; the issue with videos like that is the fact that the glorify and promote horribly irresponsible ridding and behavior that only makes motorists more aggressive and upset at cyclists. No brakes on those hills in that kind of traffic is dangerous enough to start with and those guys are, with little to know thought about other people, making the conscious decision to cut things as close as possible for the sake of getting a thrill.

Not only do you have them encouraging yet another kid to get out there on a bike with no brakes and make bad choices but they are putting others at risk. You don't think a pedestrian who gets in the way of one of those idiots is not going to get hurt? What if it's a kid? What about the costs, both mentally and monetarily, of a motorist who ends up hitting one of them because they broke the law and put themselves at risk? One of those guys misjudges a guy going 5 over the limit through an intersection and he's dead; oh yeah, the speared broke the law but the rider was still running a RED light, should that driver have to live with that? How about somebody who makes a turn they thought they where clear for only to strike one of those idiots skirting around their car?

Stuff like that is stupid and dangerous, it puts the riders at risk. It puts others at risk. It makes other cyclists look bad and generates ill will towards cyclists. When one rides like that they are thinking of no one but themselves and there is really no excuse for it beyond complete and total selfishness; making videos to glorify and promote that is even worse.

Also don't even use that as an excuse of why there are not more ChiFG kids here; I can not speak for them but I would be willing to bet that most of the serious cyclists on that forum may not feel as strongly about it as I do but still do not endorse that kind of riding. Fixie tricks are neat, I like to watch them, when preformed at the right time and place.

And before I see the standard come back about me and laws: No, I don't follow every one but I also do not take unnecessary risks and I try to think about the people I share the road with.

I still like watching it - these guys wouldnt be such d-bags if less people drove...

Permalink Reply by h' Zerocats on February 11, 2010 at 8:00pm
Edit-- originally called cutifly on his own lack of follow-through but deleted out of respect to OP and topic maintenance.

Permalink Reply by Aaron Bussey on February 11, 2010 at 8:21pm
DUG - good points and well written....I agree wholeheartedly, but still find it awesome to watch. Maybe we need a closed track where we can have these guys do these things without endangering others - like a X-Games version of Crazy Taxi....

This is missing the point to the highest degree.

While I am pretty sure they would just find new and interesting ways to be douche bags if there where fewer cars that is beside the point; the issue with videos like that is the fact that the glorify and promote horribly irresponsible ridding and behavior that only makes motorists more aggressive and upset at cyclists....(edit)