Almost every bike lane I use regularly looks like this one (taken tonight): 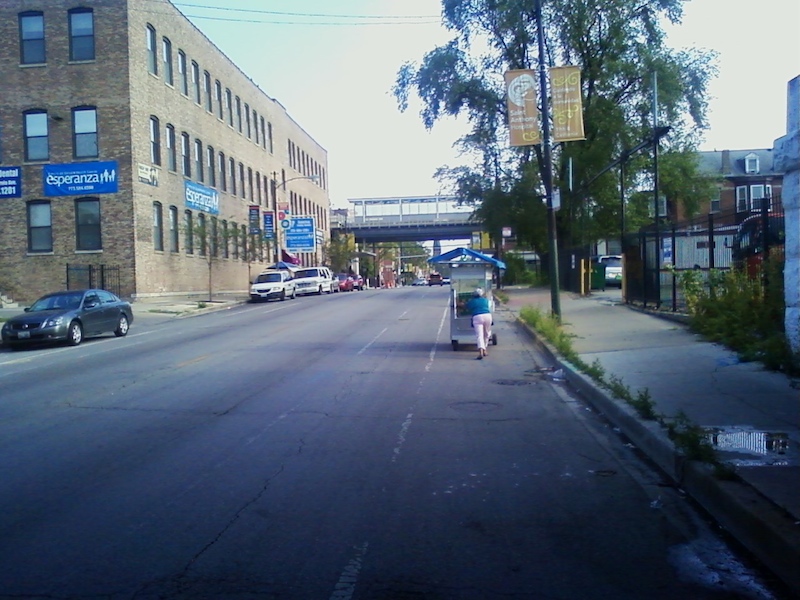 Anyone know if the city still intends to maintain the current painted bike lanes, or are they being abandoned in favor of protected bike lanes?

Permalink Reply by Kelly on August 9, 2011 at 8:37am
I know we have had recent stretches of Lawrence WIDENED and painted for cyclists due to action from our newly elected alderman. Contact your alder(wo)man to get on the "to paint" list.

Permalink Reply by Active Transportation Alliance on August 9, 2011 at 11:28am

Chicago’s bike lanes are definitely in need of restriping.  Most of the money that pays for bike lanes and protected bike lanes comes from the federal government’s Congestion Mitigation Air Quality grants.

Active Trans believes we should continue supporting the city investing in new infrastructure (protected bike lanes, which are safer for everyone) while finding ways to update and maintain our existing bike lanes.

And many aldermen have done a great job of supplementing the city’s efforts by using their aldermanic menu funds to restripe crosswalks and bike lanes around the city.

I'm not one to make excuses for the City (usually) but last year there was a shortage of titanium dioxide, the white pigment for road paint. There were (still are?) also issues with other materials for road markings either being hard to get or crazy expensive.

These are old news, but it might at least partially explain why the striping got to the state it is in now.

I wrote about this very topic on Grid Chicago in June.

The story I told is essentially the same as Adolfo's. The shortage of titanium dioxide doesn't explain why the striping got to the state it is in now. Bike lane stripes use thermoplastic, not paint. Paint lasts about a year (say goodbye to Kinzie Street unless it's refreshed or replaced with thermoplastic), but thermoplastic lasts about 5 years.

Thanks for the info Adolfo, Steve, et al.

Last night I rode on the Halsted bike lane btw 31st and 21st and noticed that only the outer stripe, i.e. farthest from the curb, separating the bike lane from the car lane had been repainted recently.

The stripes closer to the curbs are almost gone.

Strange effect, which seemed to result in cyclists riding almost to the curb where no cars were present.

Any explanation for this?

Permalink Reply by Cruz Cardenas on August 15, 2011 at 12:51am
Archer avenue I feel needs some repair.

Permalink Reply by John Wirtz on August 15, 2011 at 7:46am
They're being converted to protected food cart lanes.

Permalink Reply by Steven Vance on August 15, 2011 at 9:58am
The Grid Chicago article mentions that CDOT completed a survey to inventory the conditions of all bike lanes and marked-shared lanes in 2008 - and nothing came of it. CDOT's contractor, Sam Schwartz, will apparently do the same thing this year for the "Bike 2020 Plan" (aka the new "Streets for Cycling Plan").

Permalink Reply by h' Zerocats on August 15, 2011 at 10:33am
Any chance you could put a word in with George Cardenas?

I've been meaning to post on this topic on our blog for Bike Walk Lincoln Park and did so today with my thoughts.

The problem is that bike lanes run through numerous aldermanic wards, and the users of the bike lanes may or may not live in the wards, especially in long commuter corridors. Any given alderman has little incentive to allot menu funds when they are only "responsible" for a half mile of the street in question. This is all so very wrong.

I find it amusing that both cyclists and the Amish have complained about them.

﻿﻿They're very common on rural roads and are for the most part hated by cyclists because they destroy otherwise comfortable and safe to ride on shoulders.

If used in the city to separate bike lanes from motorized traffic I would be afraid that the width required for rumble strips would be taken out of the bike lanes. This would effectively narrow the bike lane and push cyclists further into the door zone. Wikipedia has quite a bite of information.

I believe those horizontal raised ridges that vibrate cars are called "rumble strips".  I saw an example of that when I rode to Bong Recreation Area last September.  They were in the middle of WI 142 and they are the bane of many bicyclists.