So I was having a great day until this happened... 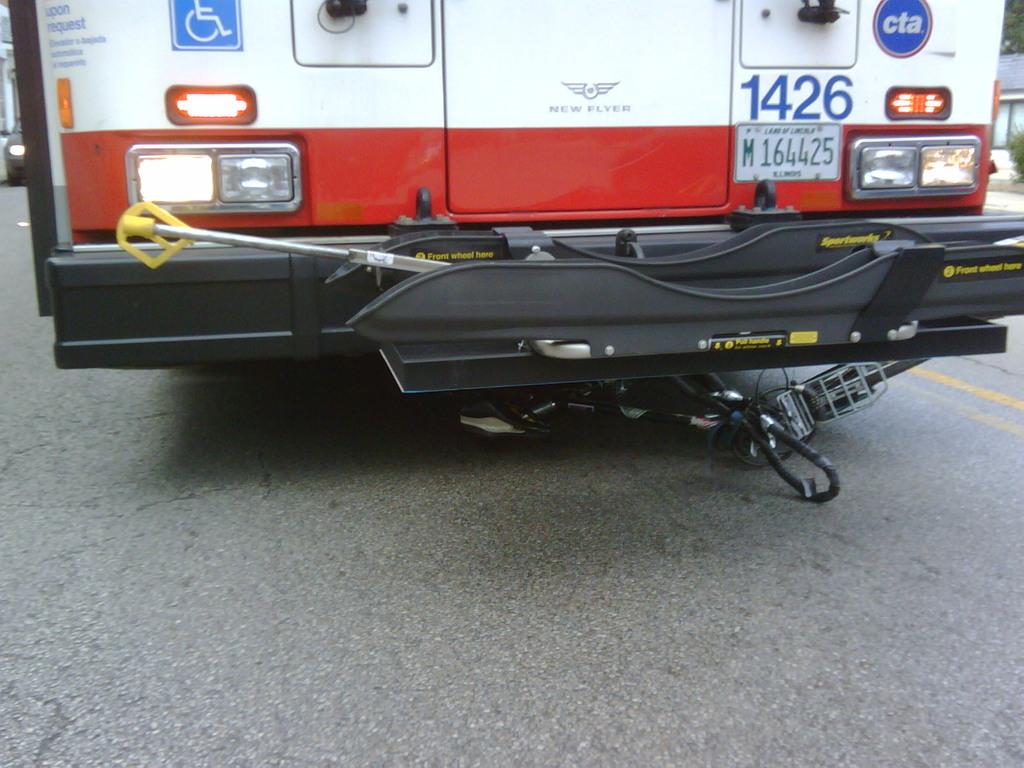 Permalink Reply by A.K.A Paul on July 31, 2010 at 7:30pm
In the interest of full disclosure, I should mention I was not on the bike at the time. The bike was on the bike rack on the front of the bus and fell off about three blocks afther I put it on the rack

Permalink Reply by A.K.A Paul on July 31, 2010 at 7:49pm
The rack totally failed. Check out the arm on the left that is supposed to clamp down on the front tire, it's fully extended. The spring was working when I put it over the tire. Unfortunately something happened to the (spring?) after that because there was no longer a spring keeping the arm in the "Non-extended" position over my tire.

The operator could not believe it either. She and the supervisor that came out were great about the whole thing. A CTA emergency truck came out and "disabled" the the inside position on the rack afterwards so that it couldnt be used.

Permalink Reply by Finch on July 31, 2010 at 8:44pm
Oh man, I always tell my boyfriend that I am always a tiny bit nervous putting my bike in the bus rack. He always tells me, nonsense, they're totally solid. Eeep.

Permalink Reply by A.K.A Paul on July 31, 2010 at 9:08pm
Believe it or not the bike is not toast, which I thought it would be! Aside from the handle bars being turned to the side and I'm sure more scratches, scratches I couldnt distinguish from the ones that were already there. It's my work bike so it always been very functional but not pretty in a non-theft, non- attractive sort of way.
I think the driver stopped just in time. She yelled back "Ah- sir, your bike is under the bus".

The supervisor that came out said that "we put our bikes on the rack at our own (the bikes) peril. I told the supervisor if that is the case it would only probably count if their equipment were working properly. Not sure if that's true or not. I took lots of pictures and had an accident report made out just in case it.

I never had a second thought about putting my bike on a bus rack until now. I probably will choose to ride more in the future rather than put it on the bus. I wish there was something I could have done but I think it was just some freak accident thing where the spring broke while it was holding my bike.

Permalink Reply by Tank-Ridin' Ryan on July 31, 2010 at 9:50pm
I hope you can get it running again without too much work/cost.

Not Nathan Fillion (aka Paul) said:

"Ah- sir, your bike is under the bus"

Permalink Reply by Vilda on August 1, 2010 at 1:19am
So if the driver rear ended another car and crushed your bike in the process they would say sorry it's your problem? Or in this case the device fails and they say sorry your problem? Seems like BS to me. Fuck the CTA. Glad you are ok as well as the bike.

Not Nathan Fillon (aka Paul) said:
"The supervisor that came out said that "we put our bikes on the rack at our own (the bikes) peril. I told the supervisor if that is the case it would only probably count if their equipment were working properly."

Permalink Reply by Adam "Cezar" Jenkins on August 1, 2010 at 8:12am
Some people lock to the bus when putting their bike on. Might be a good idea.

Permalink Reply by dav on August 1, 2010 at 8:18am
Please give us updates. I'm interested in knowing how the CTA follows up.

Permalink Reply by h' Zerocats on August 1, 2010 at 9:42am
I actually did use a bungee on Friday when I encountered a rack that had a worn out spring (the style they're phasing out with the red tire retainers)-- I asked the driver if it was OK and he was very nice.
All it takes is a short bungee between the wheel retainer and any part of the bike (I used the bottle cage).

As to the OP's problem-- the new style racks that they're phasing in can get stiff-- typically that makes the wheel retainer a bear to extend (frikkin' hate it), but in Paul's case I'm guessing he extended it and it stuck in that position rather than retracting in on the wheel? I always give them a nudge and try to make sure they grab the wheel towards the back of the high point-- if it wants to stick in that position, fine.

The style you're referencing Clark . . . I think we only saw a few of those in the city that were early prototypes-- not sure exactly what you meant to link to but the wheel retainer is shaped like a cane handle, right?

And I'd also like some suggestions for the rest of us who use those bus bike racks...how can we make sure this doesn't happen to us? The bus bike rack shown in your picture isn't like those that I've used, which are totally made of steel and have no springs as far as I know.
The pictured rack (above) looks a lot flimsier. I'd assume that front wheel stabilization bar and spring might fail in other instances. Could we keep the bike on the bus by using a bungie cord somehow? Perhaps to positively attach the clamp arm to the front wheel? What do you suggest? I don't like the option to ride my bike down the bus route, instead of using the bus.