Has anyone noticed the random guy directing traffic on Lake Street just west of Des Plaines, near the Kennedy exit?

He seems to be there every morning, dutifully waving cars through and telling others to hold up. Sometimes he's wearing a neon vest, sometimes he's not. I'm pretty sure he's not a duly authorized traffic enforcement official, so he's doing this outside the bounds of the law from what I can tell.

I find this concerning because it seems like a matter of time before someone gets hurt. He seems to mainly focus on cars coming off the highway and the middle lanes of traffic on lake, and he tends not to notice bikes in the outside lane. On a few occassions now I've seen him waving cars through with no regard to incoming bike traffic.

I did report him before but apparently nothing has been done. I don't tend to go out of my way to be a whistleblower, so it takes a lot for me to report someone, but this just seems like a bad situation. Its possible the man might be homeless, and/or doing this out of the goodness of his heart, so I dont harbor ill will towards him and in a way feel bad about reporting him, it just seems like there's a potential for something to go really wrong.

If you feel bad reporting him, don't...

Write him a letter expressing your concerns and hand it to him so you don't distract him with a conversation.  Maybe print out bicycle and applicable vehicle traffic laws.

I'm constatntly concerned that this guy is going to wave forward one of those vehicles exiting the expressway while I'm passing in front. I don't have a stop sign, they don't stop if traffic is backed up from the light. It's a terrible intersection. The only possible solution I can suggest is a light, hopefully with a camera. It would be much safer than this guy. He hasn't been there for two day though, so now it's back to fully unregulated chaos.

I have no clue if this guy is legit or not, but the City has sent out traffic enforcement people in the loop/west loop area in the past to direct traffic (instead of CPD) at problem spots.  They wore pretty distinct vests back then that said traffic management, along with a pretty standard traffic uniform

I haven't seen it in a while, but they were fairly common 5 to 10 years ago during rush periods.  And, unsurprisingly, they often created as many problems as they solved.

Here he is, taken this morning.

Here he's helpfully waving me through but just as often he completely doesn't see me coming. 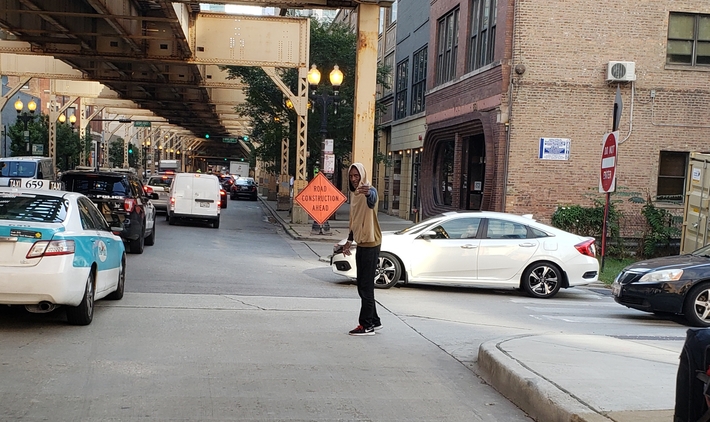