Outa' the Loop (with Bikes and Books) I like to bike and I like to read … a lot on both counts. I really like to read about bikers who travel way beyond the city limits or who, more importantly, reach beyond their intellectual horizons. As long as it’s on a bike, I'm in. I'll read it; but there are seven books I can read over and over and over again. There’s Le Surmâle by Alfred Jerry, the French proto-Surrealist. Written in 1902 about a six-man bicycle racing a train, it hugs together his three obsessions: sex, alcohol, and cycling (Midnight Marauders anyone?) Like Jerry, Dervla Murphy carries a revolver while biking. Unlike our Parisian, she leaves her native land far behind in 1962. In Full Tilt: Ireland to India on a Bicycle, she describes the Balkans, the Middle East, and Central Asia during these regions’ worst winter in two decades (now that’s Bike Winter). 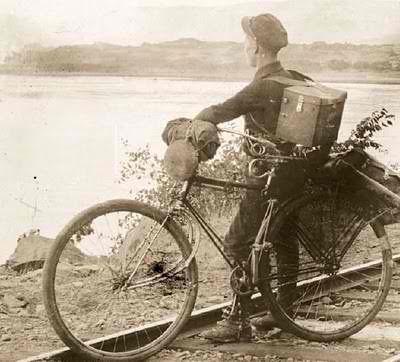 At least Dervla returned (four years later she wrote In Ethiopia with a Mule). Frank Lenz never did. The American accountant turned long-distance cyclist disappeared in eastern Turkey in 1894. David Herlinhy’s The Lost Cyclist reminds us how the now forgotten Lenz not only inspired later cyclists and motorcyclists to circumnavigate the globe. He was also an early champion of the safety bicycle. Perhaps it takes a woman or a good Jewish mother from Boston. One year later Annie Londonderry negotiates a lucrative contract to promote bottled water (!) and circles the globe (!!), as told by Peter Zheutlin in Around The World On Two Wheels (BTW, her revolver had pearl grips). 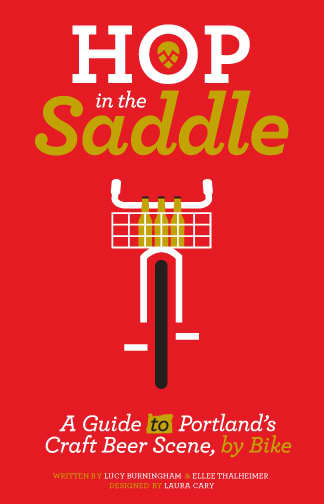 A bit more Downton Abbey is Three Men on a Bummel, the "Mother of All Tweed Rides". Jerome K. Jerome follows up his enormously successful Three Men in a Boat (… no shit) with this Grand Bicycle Tour through Germany’s Black Forest in 1900. Imagine Wooster & Jeeves meets Colonel Klink & Sergeant Schultz (again … no shit). A bit more Monty Python is Flann O'Brien’s The Third Policeman. Whether it's a ‘60s thriller or a tradition vs. modernity polemic this has got to be the only of literary work where the romantic lead is played by a “bicycle of unusual perfection”. Other bike books come and go for me but, like I said, these I can read again and again at home … or in bars. One place I’d like to do that one-day is in Portland, way beyond my suburban limits. And when I do, I can Hop in the Saddle with Lucy Burningham’s and Ellee Thalheimer’s guide to Portland's craft beer scene.

Flann O'Brien wrote People who spent most of their natural lives riding iron bicycles … get their personalities mixed up with the personalities of their bicycle. And so it's the same with bike books.  What are your favs? Why? Make this a robust resource with your comments below!

Thanks and Roll & Read On,

Dug up this old thread: http://www.thechainlink.org/forum/topics/bike-book-recs?xg_source=a...

I still stand by French Revolutions being hilarious, and Cycling Home From Siberia as well as Miles From Nowhere being really good reads.

Thanks Tank! We thought it was time to revive the thread, especially since bikers keep writing & rolling :) And as we move into the website and newsletter redesign do feel free to give the reasons behind your choices :0

Dug up this old thread: http://www.thechainlink.org/forum/topics/bike-book-recs?xg_source=a...

I still stand by French Revolutions being hilarious, and Cycling Home From Siberia as well as Miles From Nowhere being really good reads.

I had no idea Jerome K. Jerome wrote anything other than "Three Men in a Boat (to say nothing of the dog)".  Thanks!  Thanks for all of the other ones, too.  I need another dozen books to add to the TBR (to be read) which has grown since I started cycling.  Just because I take up time on my bike does not mean I have stopped accumulating books--I have only taken away time for reading.

Complete Guide to Bicycle Maintenance and Repair by the Editors of Bicycling Magazine. I have the dog-eared, lube-and-grease-stained 1986 version.

Following the Sun, A Bicycle Pilgrimage from Andalusia to the Hebrides

A Dog in a Hat: An American Bike Racers Story of Mud Drugs Blooed Betrayal and Beauty in Belguim

It's All About The Bike, The Pursuit of Happiness on Two Wheels

If you can find it, check out

Major: A Black Athlete, A White Era, and the Fight to Be the World's Fastest Human Being by Todd Balf. True-life tale of late-19th-century world bike champion Major Taylor. As well as being a story “bikies” can identify with, there's a good deal of New England's social, industrial, and bicycle-manufacturing history worked in.

Abe Books.  One can find almost anything at Abe Books.  I found the Three Men and the Major Taylor.  They are used and in good condition.  Full Tilt is available, too, but only from the U.K. and the shipping is more than the book.

One would have to have a Kindle!  I will never get over wanting to have real books.

While I am here, I have two recommendations that are travel related but not bike related:

Towers of Trebizond by Rose Macaulay.  This one has made a comeback recently.

Travels with Herodotus by Ryszard Kapuscinski

I can never remember how to make the title into a link--sorry.

Three Men on a Bummel is free from the Kindle store.

http://www.downtheroad.org/ Three books published, a lot more info on the web site than the books.

http://familyonbikes.org/ A whole family riding bicycles for years on end.

A book series that I love, but which only tangentially involves bikes, is the Flavia De Luce series of mysteries.  Flavia is a child genius essentially left to run amok in the decaying ruins of the family mansion.  Her means of getting just about everywhere is to ride Gladys, her hand-me-down bicycle. Gladys is as much a character in the books as an inanimate object can be.

"Until I rescued her from rusty oblivion, my trusty old three-speed BSA Keep Fit had languished for years in a toolshed among broken flowerpots and wooden wheelbarrows.  Like so many other things at Buckshaw, she had once belonged to Harriet, who had named her l'Hirondelle:  "the swallow."  I had rechristened her Gladys.

Gladys' tires had been flat, her gears bone dry and crying out for oil, but with her own onboard tire pump and black leather tool bag behind her seat, she was entirely self-sufficient.  With Dogger's help, I soon had her in tiptop running order. In the tool kit, I had found a booklet called Cycling for Women of All Ages, by Prunella Stack, the leader of the Women's League of Health and Beauty.  On its cover was written with black ink, in beautiful, flowing script:  Harriet de Luce, Buckshaw.

There were times when Harriet was not gone;  she was everywhere.

As I raced home, past the leaning moss-covered headstones in the heaped-up churchyard of St. Tancred's, through the narrow leafy lanes, across the chalky High Road, and into the open country, I let Gladys have her head, swooping down the slopes past the rushing hedges, imagining all the while I was the pilot of one of the Spitfires which, just five years ago, had skimmed these very hedgerows like swallows as they came to land at Leathcote.

I had learned from the booklet that if I bicycled with a poker back like Miss Gulch in The Wizard of Oz at the cinema, chose varied terrain, and breathed deeply, I would glow with health like the Eddystone Light, and never suffer from pimples:  a useful bit of information which I wasted no time in passing along to Ophelia.

Was there ever a companion booklet, Cycling for Men of All Ages? I wondered.  And if so, had it been written by the leader of the Men's League of Health and Handsomeness?"  excerpt from The Sweetness at the Bottom of the Pie by Alan Bradley

There's more about Gladys, but you'll need to buy or borrow the book. They are all deeply engaging tales and written with much wit.