Updated story (after cyclists wrote to comlain about previous iterations)

Bicyclist killed by semitrailer while swerving to avoid car door

As Chicago has tried to transform into a bike-friendly city, advocates say more work is needed to keep cyclists safe

There was only about five feet between the line of parked cars and the semitrailer — and no room for error. Into that narrow space rode a bicyclist, a lawyer who was on his way to work at 9 a.m. Friday.

Along the curb, a driver had just parked his white Nissan Altima. He put his hand on the car door and pushed it open.

That small act — the opening of a car door — is something many of us do every day without thinking, and often without looking. But on this morning, it had deadly consequences.

The semi was passing. The car door was opening. The bicyclist, caught in between, swerved and fell under the wheels of the truck.

The victim was identified as Neill Townsend, 32, a North Side resident who bicycled to work almost every day in all weather. He was killed as he rode southbound on North Wells Street just north of Oak Street.

The driver of the Nissan, Alexander Squiers, 22, of the 1000 block of West Wellington Avenue, was cited by police with violating a 2008 ordinance intended to protect bicyclists.

After the collision, Squiers, who police said was very shaken, remained in the area cordoned off by yellow tape, showing officers what had happened, opening his car door several times. A black bicycle lay on the ground nearby.

"This is why I don't ride a bike in the city. I'm too afraid," said Tara Werling, 18, shivering as she stood near the scene of the collision. "The bike lanes are too narrow. You're right up against the cars. If someone opens a door, you have to swerve."

And, she added, "no helmet is going to save you when you go up against a car."

In recent years, Chicago has attempted to transform itself into a bike-friendly city. Mayor Rahm Emanuel ran on a platform that included promises to add 100 miles of protected bike lanes in his first four years in office.

Last summer, the city's first protected bicycle lane, which separates cyclists from vehicles, opened along a half-mile stretch of Kinzie Street. And next spring, a much-heralded bike-share program that will allow people to check out bicycles in one area and drop them off in another is scheduled to kick off.

But on city streets crowded with people, cars and bicycles, there often is just not enough room.

Bicyclists say they perform a careful calculus each day, hugging the shoulder to stay out of traffic while also keeping a wary eye on lines of parked cars. At any moment, a car door could open into their path without warning, leading to a collision known by bicyclists as getting "doored."

"Every time I bike, someone opens the door without looking," said Chelsea Gebhardt, 27, a nurse who bikes three times a week along the stretch of Wells Street where Friday's collision occurred. "I end up yelling and the drivers usually look startled and apologize."

"A nurse I worked with got doored last year and broke her jaw. It needed to be wired shut," Gebhardt said. "She won't ride anymore. She's too traumatized."

Running into the just-opened door of a parked vehicle is among the most feared and most common incidents between cars and bicycles, biking advocates and transportation officials said.

To address the issue, wording was added to the city code in 2008 making anyone found guilty of opening a car door into traffic, causing a collision with a bicycle, eligible for a $500 fine. Last year for the first time, the Illinois Department of Transportation began requiring police departments across the state to record dooring accidents on state traffic crash forms.

Last year, 337 dooring crashes were reported in Chicago, and 117 were reported through June 30, 2012, according to IDOT officials.

The block of Wells where the collision occurred is considered a relatively safe stretch for bikers. It is flanked on both sides by bike lanes that make it a central route for bicyclists, many of whom use it to travel between the North Side and downtown.

Because of the corridor's popularity, the city had planned to widen the bike lanes on Wells next year to provide more space between bicyclists and parked cars, according to Chicago Department of Transportation spokesman Pete Scales. "It is identified as a crosstown route and the street is wide enough to accommodate it," said Scales.

"The alternative design is to either build a bike lane that is wider or to the right side of the (parked) car," said Steven Vance, a Chicago-based blogger and biking advocate. "A protected or wider bike lane may have prevented this from happening."

In August, Emanuel announced that the city will build more than 30 miles of new bicycle lanes in Chicago this year, a move that has been largely championed by the city's cycling community. The lanes will be a mix of the regular bike lanes, buffered lanes that are wider, and protected lanes, which typically feature barriers between traffic and bicycles, according to Scales.

Planners have to take many aspects into consideration when determining what type of bike lane will work for a given stretch of road. "Traffic counts and the size of the roadway are big factors," Scales said. "But, also, destinations along the route and the connectivity of the different routes together."

Friends of Townsend, who lived in the 1500 block of North LaSalle Drive, said he was an avid biker. Co-workers suspected something was wrong when he didn't show up at a morning meeting at a coffee shop. "He's always on time," said Scott Wilson, CEO of Minimal Inc. in the West Town neighborhood.

The head of operations at the design firm for the last two years, Townsend had joined the company as a consultant.

"He always had great ideas,'' Wilson said. "I'm just glad I got to know him. He will be greatly missed, both as an employee and as a friend. He had so much potential."

Let me know if you hear back from Neill's family. Apart from a bike I have everything needed to make and place a ghostbike

Sounds like we have the OK from coworkers at least-- that's enough for me.

Wish I had bought paint yesterday while at Menard's/Cicero. I'm sure I can find a bike for this, but-

There was one dropped at WTB not too long ago-- is that the one that got used for Robert H?

I would think it ideal to get the bike installed Thursday night, however I'm booked up Thursday night with orchestra.  Options-- someone gets the bike from me either Weds night or late Thursday night (I don't get home until 11 or so but could leave it outside maybe) or we install the bike Weds night (I'd say 5 to 10% chance it might be gone by Fri AM.)

WTB had two bikes. One was used for Robert H. The other one required some touch up (It may have been the original bike for Jepson Livingston). I could pick this one up on Wednesday at the earliest.

Is the one that you can use have painted already? I bought a bunch of spray cans the last time I was out in the burbs, but I may be crunched for time until Tuesday night. Therefore, a bike that needs minimum work would be preferred.

No not painted, and I hoped to pick it up tonight when I dropped off Isai's bike (my other garage on the boulevard) but stupidly didn't have the building keys with me.

The other bike must be Jepson's original.  Sounds like possibly best option at this point. Depending on whether I have more energy this week than last week I may be able to get to open shop Tues night to get it ready, but it would be better if someone else could.  We're still waiting on text for the sign, right?

I have not heard about the text. I will need to have it finalized by Wednesday, 5pm. I will paint the sign that night.

I'll have to confirm with Alex that Jepson's bike is still there.If so, I could pick it up Wednesday evening and place it Thursday evening.

Any volunteers out there to go to West Town Bikes and fix up the bike?

Also, It would be nice if the bike could be dressed up with plastic flowers, much like this one: 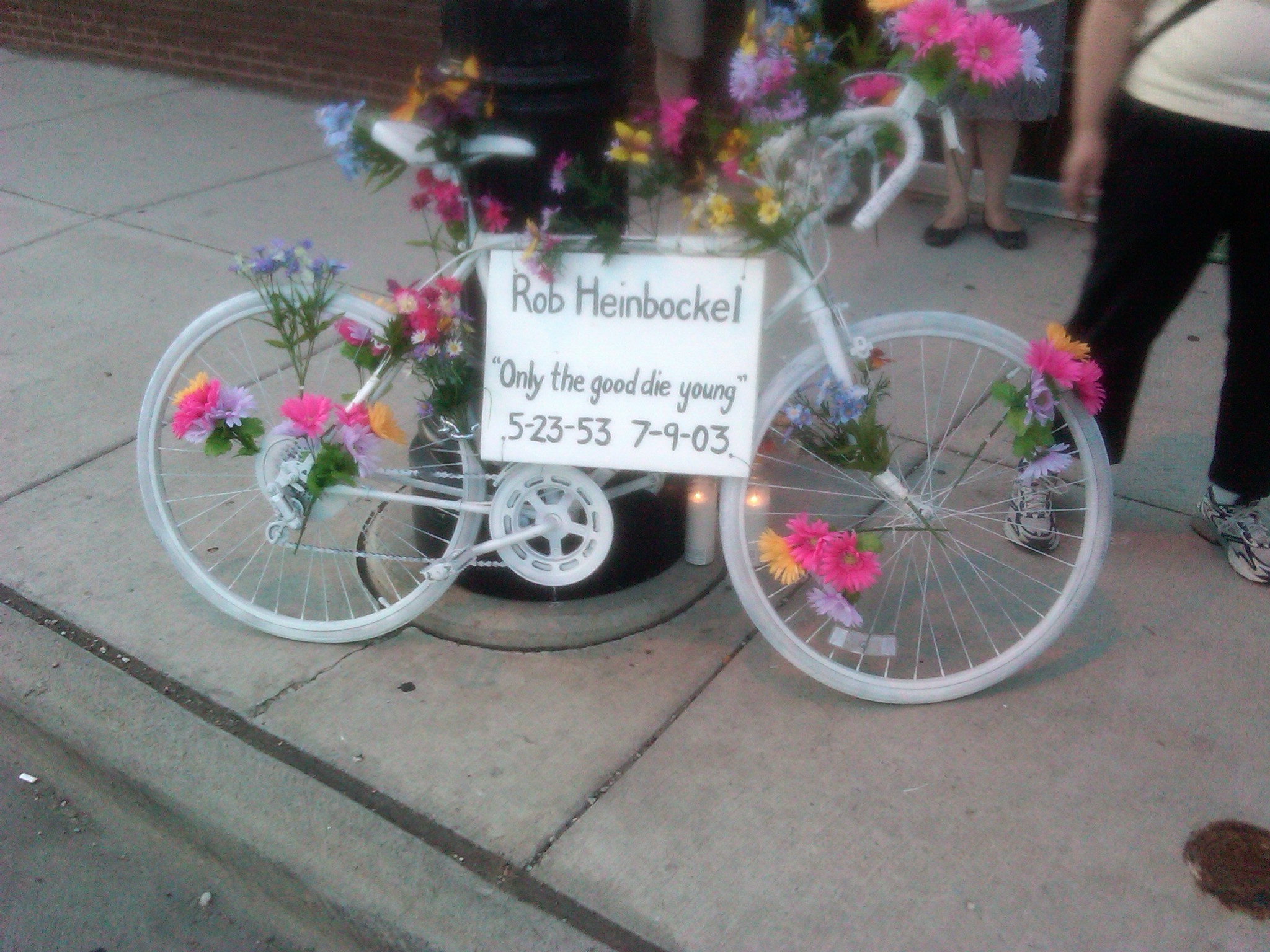 Anybody want to buy some of these and join me Thursday night?

I do have white Duct tape that we can use to attach them to the bike.

Gerry G has volunteered to help out. He can fix up the bike on Tuesday (once I confirmed that it still at WTB, of course)

I don't remember if I know who Gerry is... from Working Bikes maybe?

I have the chain from Isai's bike. Not sure how to get it to you though.

Don't know Gerry either, but we have been exchanging emails.

I suggest you keep the chain for some future use. I'll get a new one.

We are from the design office below where Neill worked and would love to help out in any way we can.  Please email me at emily.taylor@webbdevlam.com if there is any way we can help.

i don't know much about actually fixing a bike but i can go to wtb tonight and help paint or tape flowers or make a sign.  let me know if you need help, i live in the area.