Advance apologies: new to the community.

A while back in December I was biking to various ghost bike locations. A friend of mine started cataloging personal stories and encounters with ghost bikes in San Fransisco and I was looking to do the same in Chicago. I found a lot of ghost bikes up north still up, but a lot of the south-side bikes seemed to have been taken down. I was told by a Steven from streetsblog Chicago and Oboi from Slow Roll that usually the city policy was to have a hands-off policy, so I'm guessing that these were perhaps taken down by local establishments. (The ones I visited were Hector's at Western/Ogden and Frederico's at 18th and Racine). If anyone can shed some light on this, let me know.

Permalink Reply by Tom A.K. on January 29, 2015 at 10:48am
Bonnie, hi, and welcome. I don't know why these things happened. Hopefully, other group members might know. Possible reasons might be: city work/relocation, nearby business establishment displeasure, family decision to suspend the memorial, damage/desecration by bike hater, scrapper/grinder-thief, etc. . .

I don't know what can resolve this. The Ghost Bikes are out there at the mercy of all visitors. Some people are disrespectful. Someday we may have to consider using 'Ghost Bike Plaques' in some situations. They might look something like this.
- view attachment -
Attachments:

Are you reporting that Hector's and Frederico's are missing?  I'd be interested in confirmation.

I doubt that Hector's is missing.  It's only 13 months old and his mom actively loves it.  Maybe double check the location.

As Tom mentions, reasons are as diverse as the bikes.  In particular I suspect some families have no expectation beyond a brief memorial.  I similarly choose to see them as impermanent, as the alternative would require growing and unending maintenance.  Despite that, and other threats, I think they endure pretty well.

I try to keep this map updated:

And I maintain a page of removed ones:

As to Fred's-- unfortunately the neighborhood has been fairly hostile towards it.  The original was removed by the business it was in front of (Don Pedro Carnitas) who claimed that they put it in their basement but when I tried to get it I was met with a disgusting string of lies. Finding a location for the replacement wasn't easy-- originally it was chained to a pole at 18th and Racine but the cell phone store owner threw a giant hissy fit.  It ended up on the corner of Morgan and 18th but didn't last long. A replacement was placed but then they tore up that corner like 10 minutes later, removing the pole it was attached to.  As to why-- multiple factors, possibly including a greater concentration of people who make their living off the junk/scrap business than the North Side.

I've updated the map and retired page about Fred.

Hector's bike is finer than ever.  Pic by his mom just days ago: 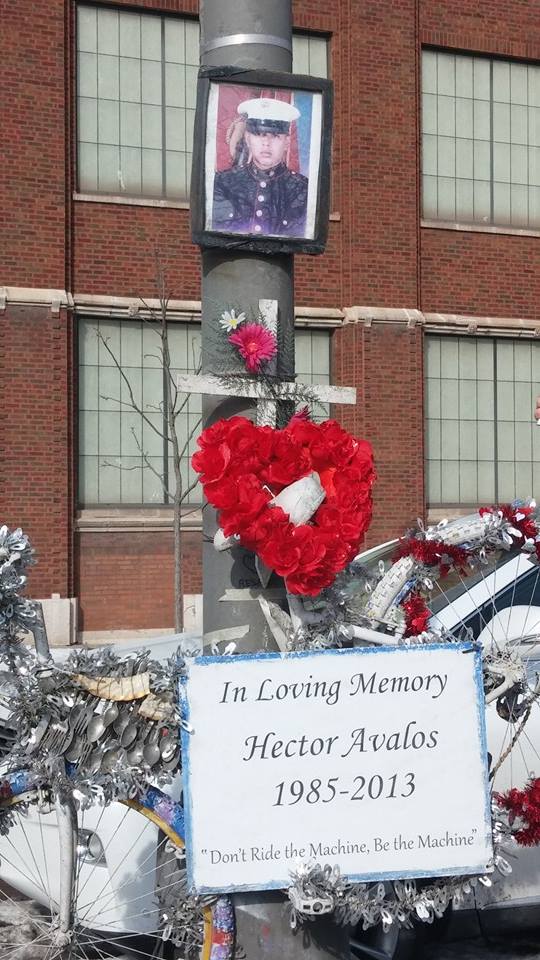