I've noticed that a number of us primarily use Divvy to get around. I figured I'd create this thread to discuss all things Divvy. Compliments. Complaints. Suggestions. All welcome.

There was healthy double digit growth in annual subscribers in 2015 and 2016. Perhaps more locals decided that biking was a good alternative to the bus/train, and decided to purchase an annual pass rather than day passes. I don't recall there being a major downturn in tourism in 2016 that might explain the 7.7% drop.

The drop in OT trips is probably due to better education, and more stations. When the service first rolled out I believe there was a lot of confusion over the term "Day Pass". I think a lot of folks thought it was a bike for a day, rather than an unlimited number of 30 minute rides. Having more stations makes it a little easier to keep a ride under the 30 minute mark.

Would be curious to read some more analysis about the non-subscriber decrease in 2016. Wonder if 2017 will show a continued slide or a rebound.

Hopefully the total trip numbers will still be up for 2017.

Below are trip counts for the first 2 quarters of each year. The latest data available is as of 6/30/2017, so I looked at trip count as of mid-year for each year.  Non-subscriber counts are down, but Subscriber trip counts are up, and we will likely be up for the year.  Note that over half of the trips are in the second half of the year, so the outcome could be different.

It would be nice to understand why this is happening.  As Argonne speculated, it could be that the people who try out the system before subscribing have mostly become subscribers at this point, so we are left with the truly occasional users and tourists.

I find it surprising.  I would have predicted that improved bike lane availability would bring an increase in non-subscribers.  Also expanding into new neighborhoods would attract people who try it out a few times before subscribing.

In 2015 there were 50.97 million visitors to Chicago. In 2016, it increased to 54.1 million. In the first half of 2017 the city was on pace to break the record once again. So, a drop in tourism can't explain the numbers. I guess it's possible that the price increase may have played a small role.

How about the weather? I don't seem to recall the weather being that bad this summer, which could have scared away the tourists.

Is there a breakdown by month? We had a rainy Spring, which could be a factor.

It used to be easy to get weather data by day for free from weatherunderground, but no more.  When I had looked at the effect of temperature and precipitation on number of rides, the effect was big and really big on non-subscribers.  If I get it from another source i will post trip counts by usertype and by year for nice weather days only this will show if the weather is the driving issue. Since we have a drop in 2016 and again in 2017, then it seems unlikely.  I have summarized trip counts by month and attached the results. 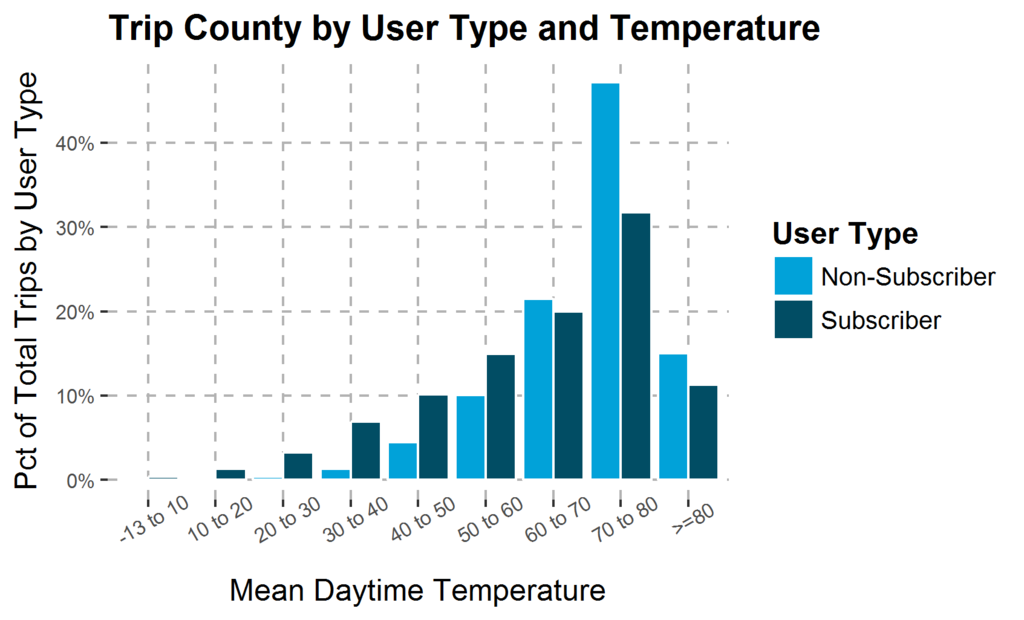 When did they double the day pass rate?  A huge price increase like that would have to have some effect on demand.

I don't believe it was doubled in one go. They raised it each year if I recall. $9.95 is still not a bad deal.

Actually Argonne69, the non-subscriber 24 hour pass rate was increased at one point from $7 to $10. That was it, it wasn't phased in over a few steps. I think that $3 increase in the 24 hour pass rate occurred sometime in 2016?

Kudos to Divvy for getting the racks cleared. I know it was only a couple inches of snow, but with the frigid cold coming on its heels, it was important to get the snow cleared ASAP. The few racks I've seen were cleared fairly well. 'No issues getting the bikes in or out.

I was surprised/impressed by how well the Divvy station had been shoveled when I picked up a bike this morning!

I did notice on my way downtown that the station at Noble/Milwaukee was snowed in. I'd be curious to learn how they decide which ones to clear.

I have to imagine that it's the responsibility of the van driver to clear snow.