Disclaimer: I have been driving a car sometimes lately. And today, not once, but twice, I almost seriously crashed into a biker weaving in and out of cars in the idiotic Belmont/California/Elston intersection. Both were guys who were stupidly cutting through two red lights to turn left (south) from westbound Belmont, and the first one especially was absolutely reckless and I had to brake so hard in order not to hit him that my seatbelt engaged. That jackhole biker is lucky I was looking for him.

But beyond those two clowns, this is a TERRIBLE intersection for biking. This turn is virtually impossible, as is any left turn by bike, let alone just finding a place to ride straight on any of the three streets. Does anyone know crash data for the area and whether anything is planned to change the terrible setup? TIA.

Biking on Elston yesterday afternoon around 4:30 was a nightmare - there was a light out at Elston and Lawrence causing traffic to back up well past Western (seriously, the worst I've seen it in my 8 yrs or so using Elston for my bike commute)- lots of cars driving in the bike lane, others blocking it trying to get out of parking spots and driveways - it was nuts.

That said I do not condone the behavior of the cyclists you encountered and agree that intersection is nightmare; it seems they recently modified the timing/pattern of the lights there which might be confusing regular users (cagers and cyclists) that use Elston.

The signal timing has indeed changed, sometime in May (I can look back through my texts to the alderman's office, Mell/33rd, about it to see the exact time I noticed it). And it hasn't been changed for the better. In fact, I think it's an error.

At six-way intersections that have an island (meaning there are two signals in each direction on each street, so 12 signals, instead of the 6 signals you find at 6-way intersections without an island), the signal pattern works like this:

1. The signal on the far side of the island for Road 1 turns green first to de-queue any cars waiting in the short stretch of Road 1 that's between Roads 2 and 3.

2. The signal on the near side of the island for Road 1 turns green.

Anyway, here's the crash data for the intersection for 2009-2014 from my Chicago Crash Browser: 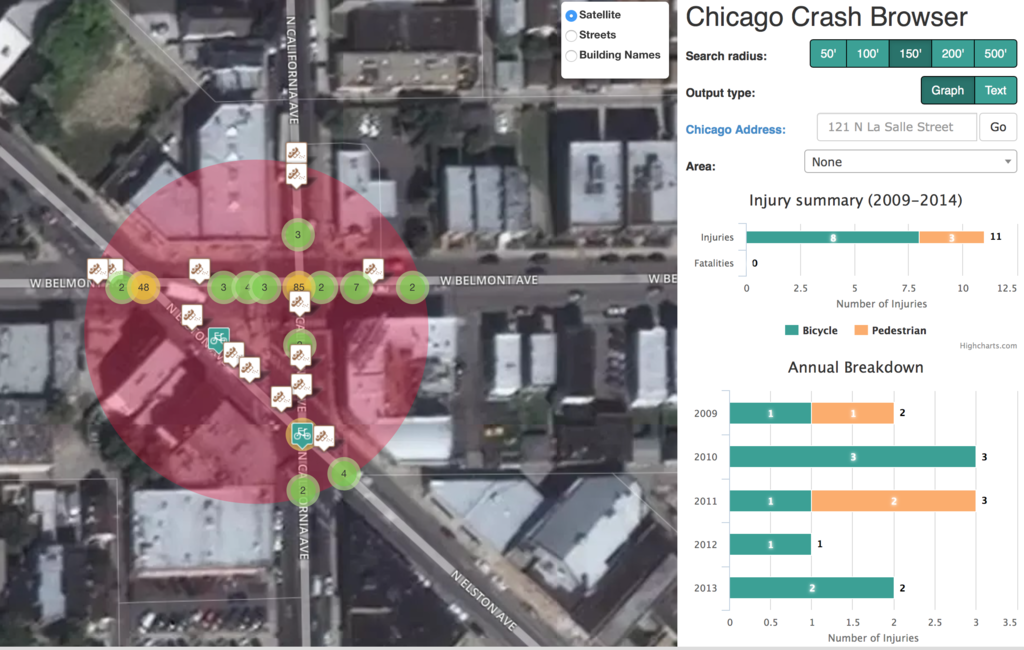 Wow - thank you so much, Steven. I also contacted Mell's office - tried online 311 because of that light timing, but there doesn't seem to be a correct category. It's really not made for safe transport of anyone. I hope they fix it! Your data and interface is SO impressive. What a resource. Thanks again!