Alderman Michelle Smith stated in her newsletter that there will be bike stings in her ward this summer.  Next week, there will be an "enforcement event" at Halsted and Diversey.  I already sent an email through the 43rd ward website expressing my displeasure. 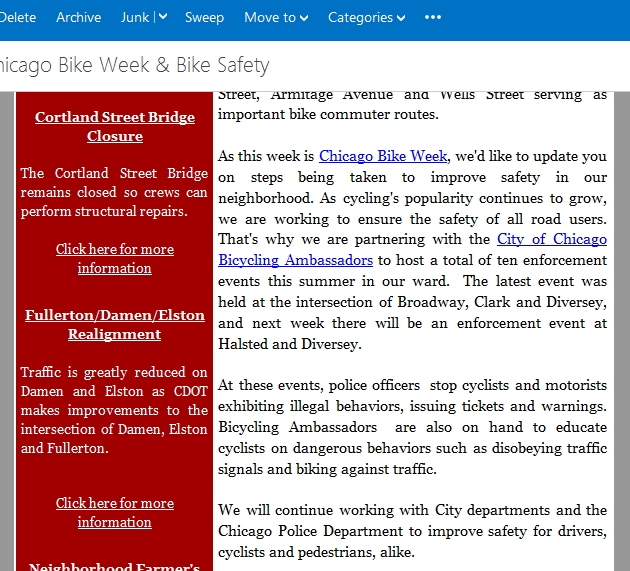 I used to live in this area and if there's one thing that's needed it's crosswalk enforcement. Especially on Clark. I have no problem with education and enforcement so long as it's applied reasonably and evenhandedly between drivers, cyclists, and pedestrians.

I don't necessarily like that it's done as an events such as these. It feels like it's more for show and to make the news than to actually make streets safer. Enforcement and education should be year round.

Darn, from the headline I thought they were gonna put out some bait and catch some bike thieves.

That's what I thought, too.

At the community meeting for the contra-flow bike lanes, Harry Osterman said the same thing (bike stings on Clark). I know we don't like to think it's a problem as a community, but enough cyclists on Clark blow red lights and stop signs w/o looking (assuming they have unlimited right-of-way), that it really does drive motorists bonkers.  It's one thing to slow roll up to a red light then proceed through after checking, it's another to just blow signals w/o looking, forcing motorist to stop short. We need to ride predictably.

Also, I see plenty of bicyclists refuse to stop for pedestrians, even if a car is already stopping for them at the cross-walk.  There's plenty of bad actor drivers out there, but let's not pretend that there aren't some bad apple cyclists that need attention as well.

Joe Schmoe said-
"Also, I see plenty of bicyclists refuse to stop for pedestrians, even if a car is already stopping for them at the cross-walk.  There's plenty of bad actor drivers out there, but let's not pretend that there aren't some bad apple cyclists that need attention as well."

The difference, IMO, is that the bad drivers kill people, bad cyclists don't.  According to Streetsblog Chicago, 18 pedestrians have been killed this year after being hit by a car.  A 3,000 pound car traveling 35 mph is going to do a lot more damage than a 40 pound bike traveling 20 mph.

Today, riding south on Wells, I stopped for an elderly couple in a crosswalk.  Three cyclists went past, but so did a car.  I am actually all for stings to ticket cyclists.  But I think enforcement against dangerous drivers (speeding, not stopping, on the phone) should be every day, routine police work.

40 pound bike eh?  Sounds like we have a problem with massively malnourished cyclists in this city to the point where their skin-covered skeletons don't even weigh anything.

You guys realize a bike is thin enough to pass a pedestrian without stopping right? Nothing wrong with slowing down a bit and passing behind them. The only reason to come to a complete stop would be to tell yourself "Wow, I'm such a nice person!"

Funny I used to feel the same way until I had a kid. It was so nice a month ago when I'm crossing Milwuakee to have three guys zip within two feet of my baby. Karma's a b*tch I guess.

Except the pedestrians don't expect you to do that.  There's plenty of senior citizens in my area that honestly, can't move/think fast enough to navigate a situation like this. They rely on people following the same rules they're accustomed to.  I'm not going to keep walking and hope the cyclist doesn't hit me.  In any case, I'm 230, so that's 240 lbs w/the bike, traveling at 20 mph = plenty enough force to kill someone w/a blow to the head.

Permalink Reply by Mike Zumwalt on June 22, 2015 at 6:22pm
Many people see you riding and think you don't see them, or are aiming for them? Riding fixed also looks like you're not stopping because you're still pedaling.

FYI that Michele Smith's staff has advised via Twitter that the next of the 10 planned enforcement events will be on Monday, June 22nd from 4:00 PM until 6:00 PM at Halsted and Diversey.

I've asked to get the full schedule of the next 8 enforcement events once the details are set and will try to post.