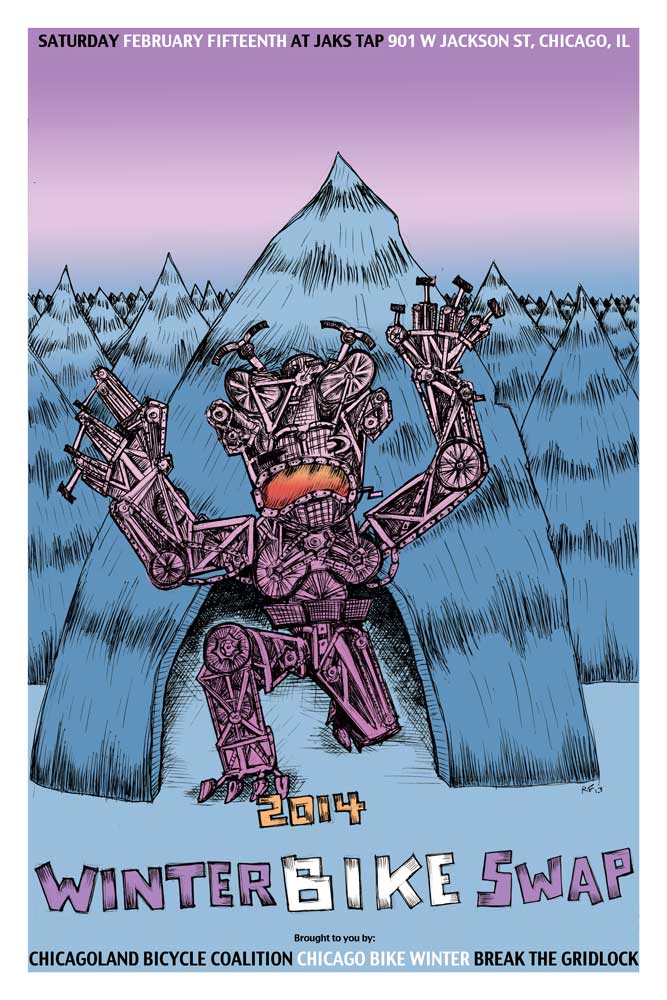 Please join the Chicagoland Bicycle Coalition, Chicago Bike Winter and Break the Gridlock for the Winter Bike Swap 2014.  Proceeds will benefit these same organizations.  We are also proud to have WLUW as our media sponsor.

This year, the event has been scaled down and is returning to the site of the original Winter Bike Swap at Jaks Tap at 901 W Jackson in Chicago on Saturday February 15, 2014 from 11:00AM until 4:00PM.

Vendor spaces are sold out!  Here is a list of who is going to be there:

You can also purchase a Winter Bike Swap and entrance to the swap for $17. 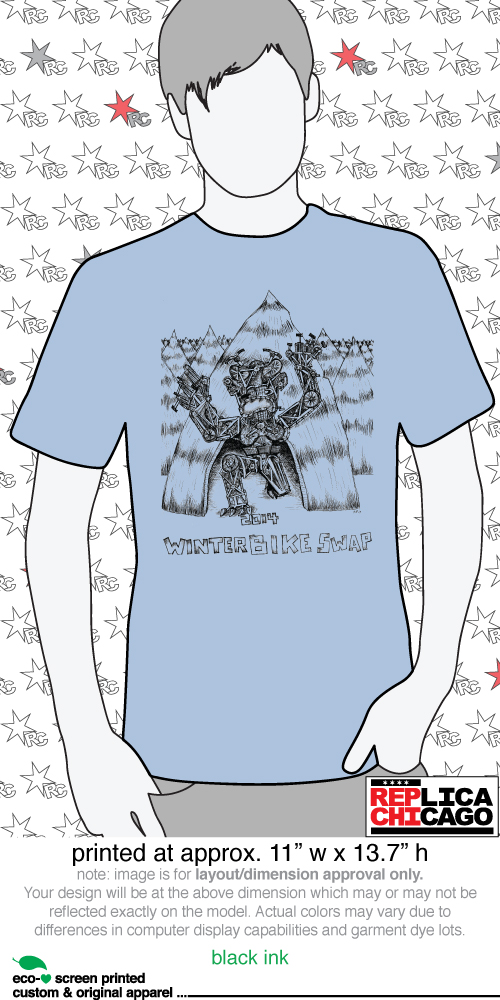 Buy the shirt and admittance for $17

You can buy the posters at the swap for $3 each but if you want them shipped, they are available for $3 plus shipping and tax.

Finally if you wish to contribute $5 to the event and its beneficiaries even if you can't attend, please consider buying a "There in Spirit" ticket for $5

Buy a There in Spirit Ticket for $5

We look forward to seeing you all at the Winter Bike Swap 2014!

The Chicagoland Bicycle Coalition is committed to making the Chicago metropolitan area a safer place for cyclists, to promote the bicycle as a mode of daily transportation and to improve the bicycling infrastructure of Chicago and its suburbs.

That is an excellent question! At the moment, we are nothing more than a group of cyclists that have come together to address the role of cycling and the cyclist in Chicago and the surrounding area. We seek to make the bicycle a more convenient mode of transportation for the area’s citizens. We seek to make our streets safer to bike on. We hope to decrease the tension between cyclists and non-cyclists. We want to make cycling a more attractive option for everyone. We would like to see more people get on their bikes and seek to give cyclists a pleasant and safe route and a place to safely park at their destination.

The Chicagoland Bicycle Coalition hopes to work with citizens of the Chicago area, governments, other advocacies, activists and allies throughout the region to promote our general agenda of safer and more convenient bicycle riding and all that this entails. It is a tip of the hat to the many bicycle advocacies throughout the United States that precede and inspire us like the San Francisco Bicycle Coalition, the Los Angeles County Bicycle Coalition, the Bicycle Coalition of Greater Philadelphia, the Atlanta Bicycle Coalition and the Minneapolis Bicycle Coalition. Our name also pays homage to the predecessor of the Active Transportation Alliance, the Chicagoland Bicycle Federation. Active Transportation Alliance continues to support a central tenet of our mission, and they are a group we consider a strong ally with many mutual interests. More than anything, it is a direct statement of our intent. We intend to act in Chicago and the surrounding metropolitan area. We intend to focus exclusively on issues that affect bicycling and bicyclists. We are a coalition of like minded individuals with these basic goals.

Chicago and its suburbs are lucky to be home to many committed cycling activists and advocates. There are numerous organizations with a mission to support the cyclist, and we want to support these groups in their endeavors whenever their goals line up with our own. We also want to find areas where we can make an impact and improve the mission of making our region the best place in the world to ride a bike. To this end, we do not want to duplicate the efforts of existing groups and individuals, even when we support them. We want to find specific goals that do not appear to have a current champion, and work to achieve them. Specifically, we would like to see to it that the space in the road for cyclists is safe and pleasant to ride on, as free as possible of potholes, open grates, missing pavement and other dangerous conditions. We would like to have a place to safely lock up our bikes when we arrive at our destination through the expansion of available bike racks and places dedicated in businesses and residences for the secure storage of bicycles.

With like minded people dedicated to active involvement in improving the city and suburbs for cyclists, we feel we can accomplish many things. We want to advocate for cycling. We want to learn from our members what they want to see us do, and we want to encourage them in doing it. To the extent that government bodies, agencies, non-profits, lobbyists, companies or individuals can assist us in these goals, we want to work with them. The only way we can fail in our efforts is to not try to make Chicagoland a better area for cycling.

Any price break for childer under n?

Hi everyone. Available volunteer here to help out with any vendors. I may have a few items to sell at your booth if that is ok? Either way I am open to help. Let me know!

We will be clearing out for spring! Everything from a test ride Model 1, coated frame sets, bare frame sets, components and accessories. Be on the lookout for previews of what we will have.

Thanks Lee for organizing!

No problem Lisa.  I've got your email and there are plenty of roles to play.  Thanks again - Lee

Lee,  I don't know how much I can help with loading/unloading but Kevin can confirm that I have a certain knack for telling people what to do!  I think you have my e-mail.  Let me know what, where, when and I will be there.  And I don't mind starting early in the day. :-)

Vendors that will be there so far include:

Space is filling up!  Book now to ensure you get yourself a table or a half-table.

Lisa - Yes!  We could definitely use some assistance at the swap.  There will be need for help directing vendors, assisting with loading and unloading, registration table, plus potentially the CBC-Bike Winter-Break the Gridlock tables, and who knows what else.  I will be in touch with you closer to the event if that is cool.  Thanks so much.