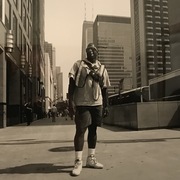 Come check out "Messenger," Dean La Prairie's show of beautiful photos of the early-Nineties Chicago bike courier scene on Friday, January 17, at 6 PM. At 6:30 PM there will be a screening of Chip Williams' excellent documentary short "Concrete Rodeo," featuring conversations with three messengers during that era. Jack Blackfelt, one of the stars of the film who is also featured in Dean's photo show, will be making a special appearance at this event. Note that the gallery will close promptly at 7:30 PM.

In the mid-nineties, when this project was shot over a two year period, the bike messenger was a common everyday fixture of the urban experience, a flesh and blood system of communication in a pre-Internet world.

Although the familiar association the casual observer had of the messenger was one of perilous motion flitting through traffic, with a blasé disregard for its rules or conventions, Dean La Prairie decided to approach it from the static convention of the portrait- he felt it was like asking anarchy to stand still for a moment and comb its hair.